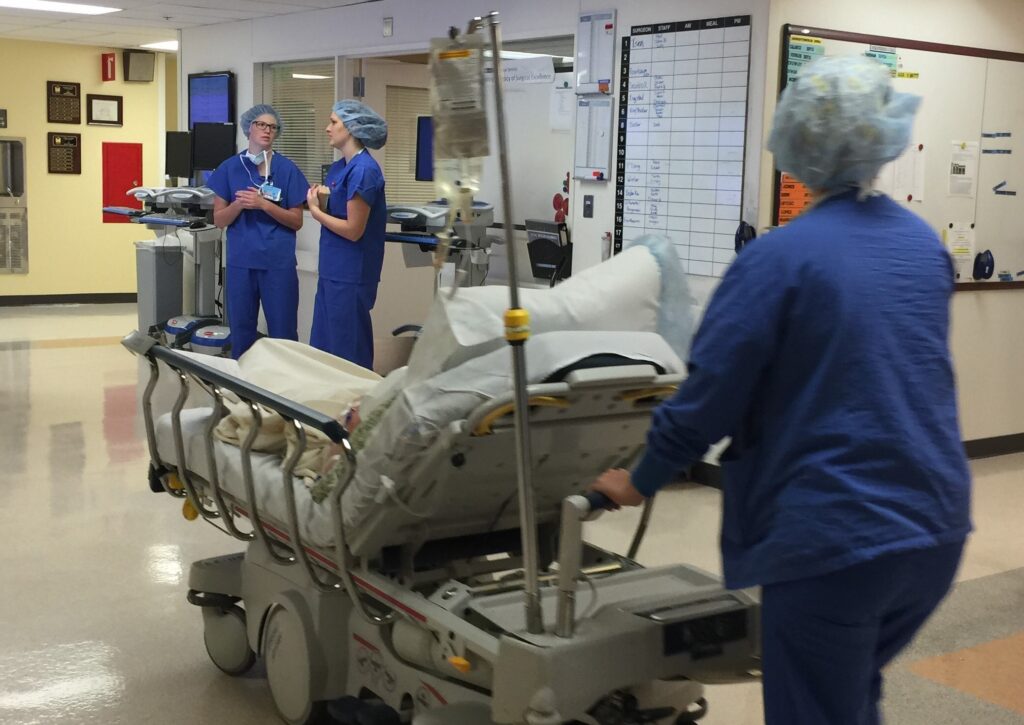 Thousands of patients in rural areas of the state might not get high quality medical care in the future if the number of out-of-state nurses practicing in Oregon continues to fall, according to a new study.

The research found that rural health care settings are the most reliant on out-of-state nurses, putting them at higher risk of a nursing shortage.

“Oregon’s smallest counties are at risk of not being able to recruit enough RNs to fill needed positions,” the study said.

The study, published earlier this month, was conducted by the Oregon Center of Nursing at the University of Portland. Jana Bitton, the center’s executive director, said the research stemmed from concern that the state does not graduate enough nurses.

“That means we’re going to be short every single year,” Bitton said.

The Oregon employment Department estimates that the state needs 2,500 new nurses each year to ensure that hospitals and clinics are fully staffed. But in 2020, Oregon nursing programs only graduated 1,200, the study said. The state has imported nurses from other states to fill the gap but it appears to be losing its ability to attract as many as it needs, the study found.

Nearly 45,000 nurses practice in Oregon. Since 2012, state medical facilities have become increasingly reliant on nurses who have their out-of-state licenses endorsed by the Oregon Nursing Board, the study found. In 2020, they made up about half of the workforce. But their numbers are dropping.

“Fewer, both proportionally and numerically, endorsing RNs appeared to be practicing in the state,” the study said. That means it may become more difficult for health care companies to plug their nursing workforce gaps by drawing nurses from out of state.

If this trend continues, frontier and rural counties would face the biggest shortages because they have the most difficulty attracting nurses educated in Oregon, the study found.

Many new graduates want to live in an urban environment, Bitton said. They also want to get their start in an acute care setting like a hospital emergency room in urban areas. Unable to hire as many Oregon graduates as they need, rural areas have becoming increasingly dependent on bringing in nurses.

“That is where the shortages are going to show up,” Bitton said.

The study analyzed the proportion of out-of-state nurses in hospitals and clinics. It found that two-thirds of the nurses in clinics came from out of state.

“This reliance on endorsing RNs from other states places non-hospital settings at higher risk of not (being) able to recruit enough RNs to meet staffing needs,” the study found.

The research follows legislation approved earlier this year that allows senior nursing students to practice without full licensing. While they still will be in training, they can relieve other nurses by picking up some of their duties.

Legislators also allocated $200 million for workforce training programs for rural residents, Oregonians with low incomes and people of color among others to work in health care, technology and manufacturing.

But those measures will not guarantee that Oregon has a stable nursing workforce, Bitton said.

“There’s no one solution that’s going to actually be able to make sure that we have all the nurses that we need,” Bitton said. “It’s going to be solved by a million different little solutions to be able to get us to a stable and solid nursing workforce.”

The center is pushing to expand Oregon’s nursing programs. But training new nurses – in community college or universities – takes time.

This issue is on the congressional radar. On Wednesday, U.S. Rep. Suzanne Bonamici, D-Oregon, will participate in a roundtable discussion about Oregon’s nursing shortage. She will be joined by educators and students from the nursing center, Oregon Health & Science University, Linfield University, Warner Pacific University and George Fox University. They will discuss ways to expand nursing education in Oregon. Bonamici is co-vice chair of the U.S. House Nursing Caucus.

In the past two years, many nurses have left the profession or retired because the job has become increasingly stressful, Bitton said.

“We’ve had quite a bit of turmoil in the nursing workforce over the last couple of years,” Bitton said.

She hopes policymakers pay attention to the new study and other research that indicates a bleak future if the state doesn’t find a way to stabilize the workforce.

“A decline in the number of nurses moving to Oregon or an increase in the proportion of endorsing RNs who do not practice in the state could have severe consequences on the ability to provide timely, high quality health care to Oregonians,” the study said.