Oregon Looks To Ease Process For Recovered Addicts To Help Others 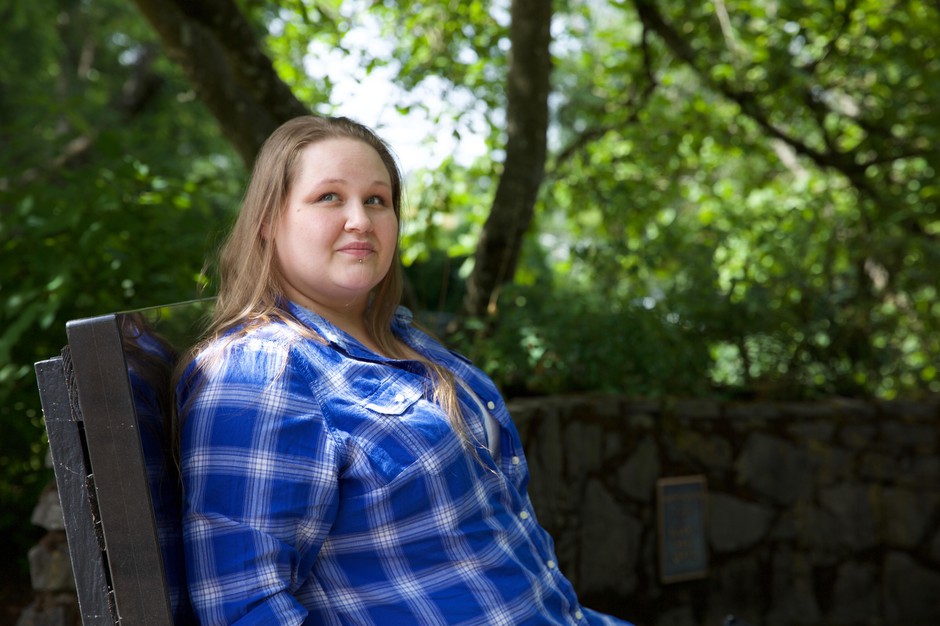 We don’t usually celebrate failure in the United States, but the truth is that success often stems from it.

Few people understand that better than "peer support specialists," counselors who struggled with drugs, alcoholism or mental illness, but eventually rebuilt their lives and now work to help others do the same.

Nonprofits and state agencies are anxious to hire them because research shows peer counselors are uniquely qualified to help people going through similar struggles. But there’s a problem.

When she was 20, the father of her child ended his life by suicide, sending her spiraling into years of methamphetamine abuse.

"I really hated myself," she said. "I hated everything I was at that time. I wanted my child back in my custody. I didn’t want to live like that anymore.”

Borgman turned things around four years ago, but not before she’d amassed a rap sheet that included identity theft, forgery, drug possession and stealing.

After graduating college as a recovery mentor, she was certified by the Addiction Counselor Certification Board of Oregon. But she hasn't been able to put her new skills to use professionally.

She said six different nonprofits have tried to employ her, even as far as having her come in to begin work. But each time, she's failed the background check.

“I automatically get denied," she said. "And we’re like, 'OK, let’s appeal it.' That’s what everybody does.”

It’s understood that peer support specialists often get turned down by the Oregon Department of Human Services background check unit because of criminal records. But the process allows the unit to approve an application to work if the applicant takes full responsibility for their crimes and shows they’ve learned from their mistakes.

“I had letters from the judge, from the county, from my counselors, from my mentors, just all kinds of stuff," she said. "They still are denying me. I don’t know why."

Borgman says the entire background check process is mystifying and can take 10 weeks or more.

The last time she when through it, she left a job with McDonald’s for a position at the Luke-Dorf recovery program,

"It was really a wonderful position," she said. "I worked there for about three months and they got the background check: Denied."

Her new bosses told her to go home immediately.

"How am I going to pay my bills?" she said. "I’ve already left McDonald's twice. I’m pretty sure they’re not going to want to work with me again."

"They can’t just sit around and wait.”

The certification board conducted a survey that found one in five behavioral health workers with a criminal history has been denied employment because of that history.

People of color are denied at twice that rate.

Martin said this whole issue is far from new. Back in the 1970s, lots of employees in the addiction and mental health fields were in recovery. But then colleges started offering courses to train social service workers.

“That big push for academia started pushing out people in recovery,” Martin said.

By the early 2000s, the pendulum started to swing back. The federal Substance Abuse and Mental Health Services Administration began pushing to include more people in recovery in counseling programs.

Martin said he believes the field needs both the scientific and human approach.

Don Erickson, with the Oregon Health Authority’s background check unit, agrees. He said the value that comes from lived experiences can’t be replicated in college.

Oregon, he said, also has a responsibility to protect people receiving counseling. That's where background checks come in.

“The intention is sound, but I think that there’s been some loss both in terms of possibly excluding some parts of the population and making it difficult and strenuous at times,” he said.

When the Oregon Legislature learned this year that complex background checks were taking up to 10 weeks, lawmakers gave the unit money for 33 more staff. That’s on top of the 53 existing jobs.

“We’ve been in the process over the last few months of recruiting and then starting to train," Erickson said. "Even now, we’re starting to see these slightly reduced timeframes in processing those complex cases.”

Erickson said he’s promised the Legislature that by the end of this year, background checks will take an average of two weeks.

That’s good news for hiring managers such as Melissa Bishop of Portland’s Central City Concern, a nonprofit that works with people experiencing homelessness.

She said it’s frustrating hiring people only to learn a couple of months later that they haven’t passed their background checks.

Peer support specialists, she said, ought to be able to have an interview with the background check unit, rather than just submitting paperwork.

“Maybe a conversation. Maybe it’s a phone conference. Maybe it’s something where the person on the other end making the decision sees them," she said. "Not their record. Not their paperwork, but sees them."