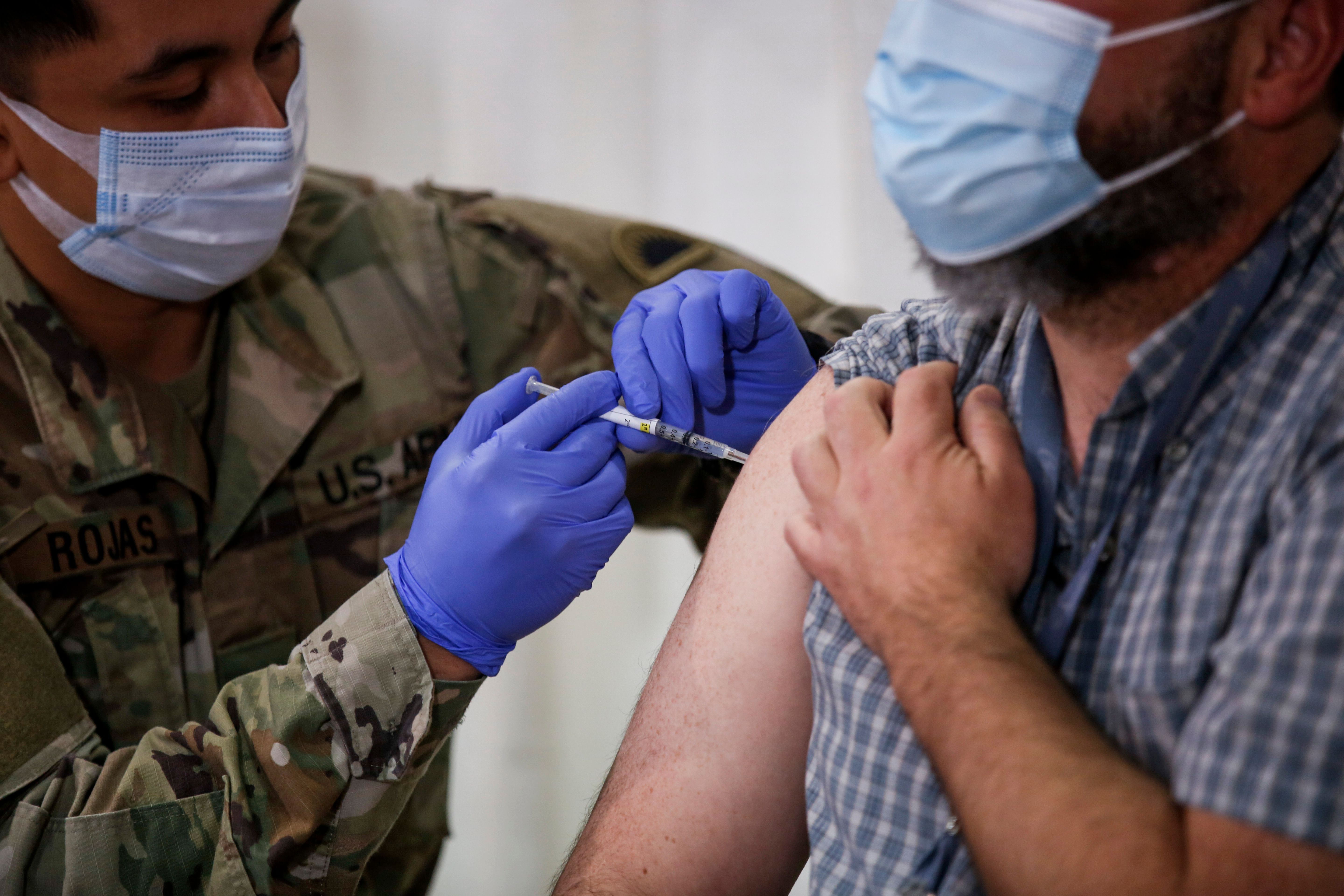 The National Guard assist with vaccinations in Oregon./Pool photo

Oregon has put seven federally qualified health centers in a pilot project that lets them administer vaccines to their patients sooner than the state’s eligibility schedule dictates.

This means  the health centers can give vaccines to patients of all categories before the date they become eligible on the state’s rollout schedule. It’s a move that the state is allowing to get doses into arms sooner for vulnerable communities, including Oregon’s migrant farm laborers, multi-generational households and communities of color.

The pilot project means the health centers can start work on other groups sooner. For example, the next date on the state’s eligibility rollout is March 29, when Oregonians 45 to 64 with underlying chronic conditions and certain essential workers, including seafood industry workers, agricultural and food processing workers and wildland firefighters, can get a dose. The  pilot centers can give those people doses immediately, as well as other groups due to become eligible in the coming months.

The state has rapidly expanded the pilot project in less than a week. On Wednesday, Oregon Health Authority Director Patrick Allen told lawmakers that three health centers were in the pilot project: Virginia Garcia Memorial Health Center, which serves Washington and Yamhill counties; and Columbia River Health in Morrow County, and One Community Health, which serves patients in Hood River and Wasco counties and Washington state.

“As part of the pilot, these seven FQHCs have been invited to help us expand vaccination efforts for Oregon communities disproportionately impacted by COVID-19,” said Rudy Owens, a spokesman for the Oregon Health Authority. “Specifically, these FQHCs have been given flexibility to move forward with vaccinating the populations they serve in their communities at their discretion and will not be limited by current statewide eligibility dates.”

The move follows repeated vows by state officials that in the vaccine rollout they want to address historically underserved racial and ethnic groups.

The pilot program affects a large pool of people. Multnomah County Health Centers alone has eight primary care health centers, seven dental clinics and seven pharmacies. It sees more than 60,000 patients annually, 60% of them people of color. More than 40% of them are non-native English speakers.

The state has faced criticism in its vaccine rollout, slammed for putting teachers ahead of seniors and vaccinating middle-aged people with underlying health conditions ahead of front-line workers like grocery store laborers. Oregon officials have said limited doses have forced them to make tough choices. They also left the door open to vaccinating groups earlier as supplies increase, such from the newly-approved Johnson & Johnson vaccine.

But so far, minority vaccination rates have remained low. Just 4% of the people who have received one or both doses of vaccine is Hispanic, state data show. Just 1% of the group to start the vaccination process is Black. Seventy-one percent of people to get vaccinated so far are white. That report, however, also notes that the race is unknown for 11% of people.

With their new flexibility, the seven health centers can vaccinate patients who otherwise might have to wait until May or later.  By May 1, the state will roll out the vaccine to more front-line workers and to adults age 16 to 44 with chronic conditions. By June 1, the state aims to open vaccinations to everyone age 45 and older. The general population age 16 to 44 would be eligible by July 1. Vaccines have not been approved for children under 16.

The flexibility is intended to allow the centers to move quicker through their populations, not allow people to skip ahead of senior citizens, state officials stress.

“The participating FQHCs have been given flexibility to move forward in vaccinating the populations they serve without limitation by current sequencing dates; therefore, they could vaccine any individuals they serve down to age 16,” Owens said in an email.
However, the authority also asks that their work be “guided” by the eligibility phases so they continue to prioritize seniors who need vaccinations.

Owens said the state sent out invitations to the centers on Friday and the responses so far have been positive.

The state allocates 3,700 doses a week total to the centers, which also get separate allocations directly from the federal government.

Yakima Valley Farm Workers Clinics and other centers welcome the added flexibility, saying it will help them get shots into arms sooner and reach people more quickly.

“We’re so grateful and so fortunate to be able to get vaccine into our health care centers and then out into our health care population but one of the things we have struggled with is the phasing or the sequencing for each of the states because it has meant we aren't able to as readily vaccinate our most vulnerable populations,” said Lori Kelley, senior director of quality at Yakima Valley Farm Workers Clinic, in an interview with The Lund Report.

The state’s new authorization means that the clinic can vaccinate farm workers and migrant seasonal workers entering the state now and others who face higher risk, Kelley said.

Kelley said the organization is hoping to obtain similar flexibility from Washington’s health officials. In both states, the organization served 181,331 patients in 2019 and 64% had a Hispanic or Latino background, according to its annual report.

Kelley said urgency is needed and delays of even a couple weeks pose a problem.

“We really wanted to make sure that we were not leaving our most vulnerable populations out," she said. “Vaccines save lives and vaccines save communities and our migrant farm workers cannot harvest remotely.”

Multnomah County Health Centers, the largest federally qualified health center in Oregon, The agency receives about 1,100 doses a week in federal and state allocations through federal and state pilot projects.

County officials said the doses will enable them to vaccinate patients with a high risk of infection, including essential workers, people of color, those experiencing homelessness and others.

“We are thrilled that more vaccines are becoming available and that there is a recognition of the role that community health centers play in the response. We’re a key partner in assuring access to high quality care and are leaders in developing equity strategies with public health,’’ said Adrienne Daniels, deputy director of Integrated Clinics Services for Multnomah County, in a statement. “Direct access to vaccines through the health center will assure more opportunities for our patients, who represent a large proportion of the highest risk essential workforce.”

Multnomah County officials said the increase will provide 1,500 doses a week to patients.

At La Clinica in Jackson County, officials receive about 300 doses weekly from the state and expect the figure to rise to 1,000 a week by the end of March.

“We've been offering vaccine to people who are eligible under state guidelines as well as to others who are uninsured, have no regular doctor, or are primarily Spanish speaking,” spokeswoman Julie Wurth said in an email. “We'll use this new flexibility to extend our reach to all our Latinx patients, as this group has been disproportionately affected by the pandemic, and we're exploring targeted outreach to other hard-to-reach populations as well. I expect us to broaden to this larger group as of next Monday.”

One Community Health is receiving 400 doses a week from the state, said communications manager Michele Shrum-Guerrero.

In some areas, the center is finding a high level of vaccine hesitancy among the senior citizen group, “meaning we are nearing the point where we have more doses than people who want the vaccine,”  Shrum-Guerrero said in an email. “The flexibility in this new pilot program allows us to move forward into the next group, where we know there are many high-risk people eager to receive the vaccine.”

At Virginia Garcia, the move will allow the provider to vaccinate “at a quicker pace,” said spokeswoman Kasi Woidyla.

“We have not been able to vaccinate the populations that we know are most impacted by the virus,” she said. “Having the flexibility from the state will allow us to reach out to those populations sooner and quicker."

Oregon has 33 federally qualified health centers, which operate from more than 200 sites across the state.

Mar 9 2021
News source:
The Lund Report
Keywords:
vaccine, FQHC, health centers, COVID-19, health care
×
This article is for premium subscribers. If you are one, please sign in below.
You can see two more premium stories for free. To subscribe, click here. We depend on premium subscriptions to survive, and they are tax deductible.
Sign InGo Premium Not now