Oregon Legislators Want to Ban Smoking in Cars with Kids

Secondhand smoke in cars is 27 percent more concentrated than in smoker’s homes, according to the California EPA
By:
Christopher David Gray

February 21, 2013 -- Republican Rep. Jim Thompson of Dallas said that enacting a ban on smoking in cars with children isn’t about restricting personal choice. It’s about shielding those who don’t have a choice to be around secondhand smoke.

“I’m not an anti-smoking guru,” said Thompson, the chief House sponsor of Senate Bill 444 and the ranking Republican on the House Health Committee. “We have closed out smoking in restaurants and bars. … [But] now you can put your kids in a closed car and smoke all you want.”

A bipartisan bill came before the Senate Judiciary Committee on Thursday that would make it a crime to smoke in cars while people under 18 are in the vehicle. The measure had broad support of the committee, but a vote was delayed to slightly amend the language of the bill. 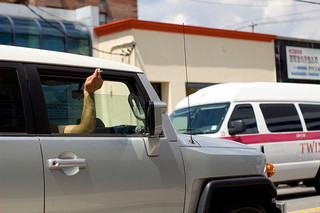 SB 444 would make smoking in cars a secondary offense — police would not be able to stop people if they see smoking, but if they pull someone over for another violation — they could write another ticket, with a first-time penalty as costly as $250.

The Surgeon General has said that no amount of secondhand smoke is healthy, but according to Colleen Hermann-Franzen of the American Lung Association, the air quality inside a smoke-filled, parked car is so poor that pollution concentrations are 10 times higher than needed for the EPA to issue an air quality alert on a smoggy day for healthy adults.

“Secondhand smoke in cars can be 27 times more concentrated than inside a smoker’s home,” said Hermann-Franzen, citing a study by the California EPA.

Thompson wasn’t the only supporter of the bill who recalled being around smoke and developing asthma as a child. Both Sens. Arnie Roblan, D-Coos Bay and Elizabeth Steiner Hayward, D-Beaverton, said they had family members who smoked and they both had asthma, too.

Sen. Floyd Prozanski, D-Eugene, the chairman of the Senate Judiciary Committee, was ready to call a vote that seemed to have unanimous approval, but he delayed making that move until the judiciary counsel could incorporate an amendment limiting penalties to $500 for repeat offenders and also broaden language to ban all smoking in cars with kids, not just tobacco.

“Smoke’s smoke -- I do think it simplifies things for law enforcement,” said Sen. Jeff Kruse, R-Roseburg, who didn’t want cloves or marijuana exempted from the law. “We may not have hard evidence, but cloves are probably worse than tobacco.”

A second amendment to exempt convertibles and open windows from the bill was scuttled, both to reduce legal complications and because open windows do little to reduce the toxicity of the air.

“The smoke does pool in the backseat of the car,” Hermann-Franzen said.

Steiner Hayward, the chief sponsor in the Senate, said as a family physician she sees the effects of secondhand smoke on kids firsthand. Breathing in secondhand smoke means they’re much likelier to develop asthma and become nicotine-dependent.

“Children are exposed to more secondhand smoke than adults, often because they don’t have a choice,” said Steiner Hayward.

Her comments were seconded by Portland resident Christina Skellenger who submitted testimony.

“My father was a smoker, and he smoked in the car. As a child, I hated it, it stunk,” said Skellenger, 31. “You’re caught in a small space.”

Skellenger said her father later died of lung cancer as a result of his habit.

Steiner Hayward’s office said four states have already banned smoking in cars when children are riding, including conservative Arkansas and Louisiana as well as more traditional leaders in tobacco bans, California and Maine. The Utah House also passed a ban this year, according to the lung association.

Libertarian-leaning Sen. Brian Boquist of McMinnville is the chief Republican sponsor in the Senate and the bill also has eight other sponsors, including the chairs of the House and Senate health committees.

“Pretty much everyone who cares about kids supports this bill,” Steiner Hayward said.

Well, almost everyone. The Oregonian editorialized against SB 444 calling it “creepy,” and an attempt by the state to “enforce good parenting.”

Image for this story by Michael Dougherty (CC BY-SA 2.0) via Flickr.