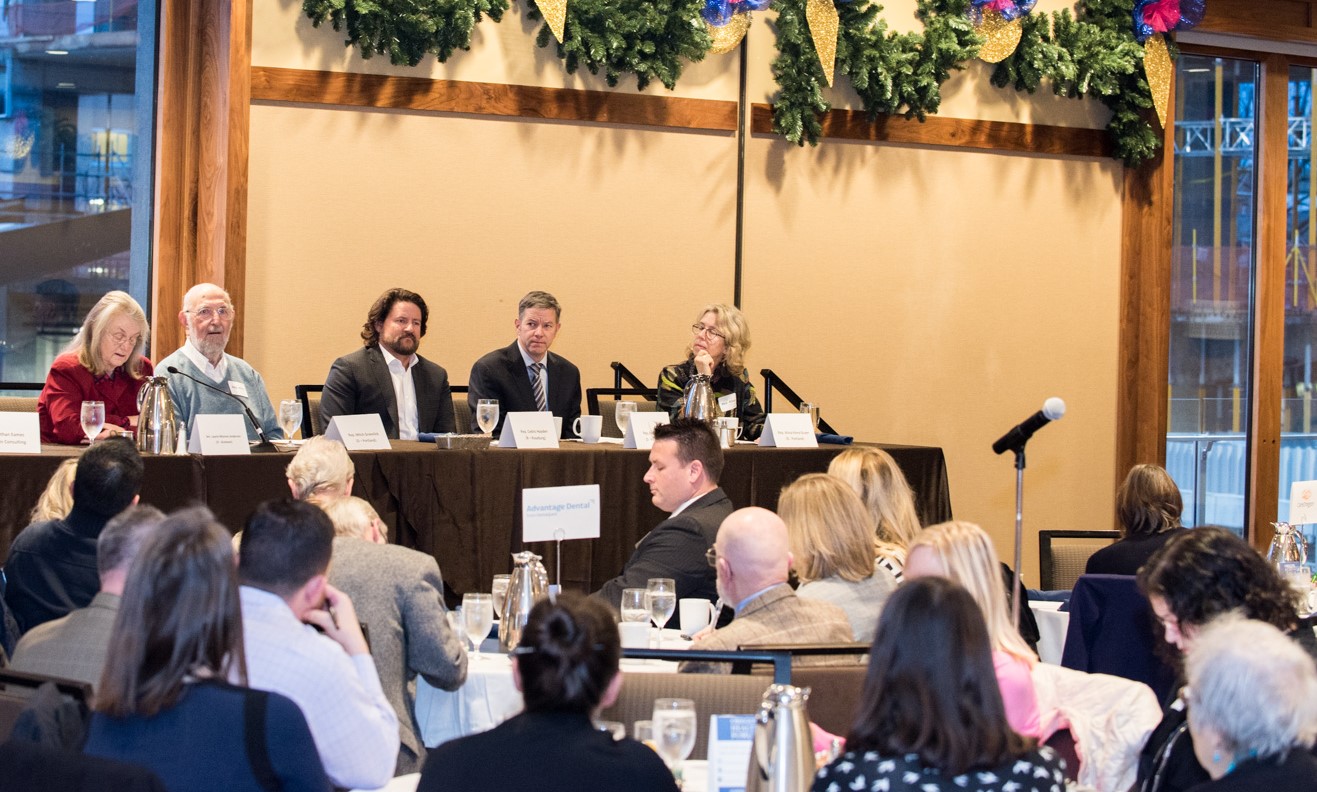 Five Oregon legislators detailed their health agenda for the 2019 legislative session at a breakfast forum on Tuesday sponsored by the Oregon Health Forum, which is affiliated with The Lund Report. Questions from the audience on fluoridation and vaccination also prompted firm responses from legislators on two of the state’s most controversial issues.

The first to speak, Sen. Laurie Monnes Anderson, D-Gresham, highlighted the need to support Gov. Kate Brown’s sustainable funding package for the Oregon Health Plan that provides health coverage to one in four Oregonians. Brown’s proposed 2019 budget raises taxes on hospitals from 5.3 percent to 6 percent to raise $98 million. It reinstates the 2 percent tax on insurance and managed care to raise $410 million. It taxes employers who don’t meet the threshold care contributions to raise $119.5 million.

Brown also proposed a $2 per pack cigarette tax to raise $95 million in the first year.

Monnes Anderson called on health officials at the forum to support the cigarette tax, which she said will likely get sent to voters for approval.

“I want all of you to get behind this,” Monnes Anderson said. “If we have to have a campaign, get involved.”

“Mental health is one of the last frontiers in health care,” Hayden said. “I don’t think Oregon does a really good job at it yet.”

He said the state needs to do a better job leveraging its prescription monitoring program to help address the opioid misuse epidemic.

Rep. Rob Nosse, D-Portland, said he plans to bring forth bills to bring down drug prices and promote transparency for consumers.

One bill would address out-of-pocket expenses and insurance co-payments. If a drug costs less than a patient’s co-payment, patients would be allowed to pay for it themselves and have that money applied to their deductible.

Trump’s bills prevent “gag clauses” in agreements between pharmacies and pharmacy benefit managers, third-party middlemen who handle the drug pricing programs for insurance companies and who used to forbid pharmacists from telling their customers the price of drugs.

Nosse also plans to sponsor a bill that would create a commission staffed by Oregon Health Authority officials that would set a drug price that they are willing to pay. Nosse was quick to explain that this bill would not be price-setting, which he said would violate constitutional law.

“We’re not telling pharmaceutical manufacturers what they can charge,” Nosse said. “We’re just saying what we will pay.”

The state representative also suggested partnering with California or a Canadian province to bring a larger population to drug price negotiations.

Finally, Nosse plans to sponsor a bill that would set up drug distribution warehouses in Canada so that commercial health plans, coordinated care organizations and Oregon pharmacies could buy drugs at the lower Canadian price. Drugs cost less in Canada because the government negotiates prices, Nosse said.

“That’s my favorite one because I actually think it does something to lower the price,” Nosse told The Lund Report.

Rep. Alissa Keny-Guyer, D-Portland, identified child abuse as a “huge” public health issue. She asked how the Legislature can ensure that Child Protective Services and child abuse centers are at capacity. She also questioned what role coordinated care organizations could play.

Monnes Anderson said Oregon needs a school-based health system within every district, if not every school. Such a system is especially important for lower-income communities like the east county, she said.

The 2019 session will be the last for the past House Health Committee chairman, Rep. Mitch Greenlick, when has spent 15 years in the Legislature. The Portland Democrat said his goal for this session is to position Oregon as the world’s test site for new health care policies.

Greenlick called Walt Disney his inspiration for health care reform. Just as the theme park visionary’s Experimental Prototype City of Tomorrow was meant to be turned into a demonstration site for technology, Greenlick said he wants Oregon to be an experimentation site for vertically integrated health care.

“I can imagine a delivery model guided by innovations brought from around the world,” Greenlick said. “I invite you all to join with me and think about a future that’s real and sustainable and possible and revolutionary.”

Greenlick said he will continue to focus on regulations that increase transparency on the finances and the assets of coordinated care organizations.

“We need to make sure this is a public enterprise because we’re spending billions of dollars of public money,” Greenlick said.

He said he plans to introduce a bill that would help expand how Oregon’s Death With Dignity Act defines a terminal illness. Right now its limited to those with a maximum of six months to live. Extending that time frame would enable someone with Alzheimer’s to decide their fate while they still have the capacity to do so. Greenlick says he expects opposition toward the bill.

“When you get both the right and the left pissed off, you get the sweet spot,” he joked.

Questions from the audience prompted the five legislators to take a position on two of the state’s most controversial health issues -- fluoridation and vaccination.

When it came to vaccinations, Nosse wasn’t shy. He said it was worth risking the alienation of his leftist voter base to consider a policy that would require shots for infectious diseases, like measles. While other legislators hedged their position, citing support for religious exemptions, Nosse said that’s not worth the health risk.

“I don’t think my religion gives me the right to opt out of something that affects your health,” Nosse said.

Keny-Guyer said the issue needs to be addressed again. The last time the Legislature tried to require that parents have their children vaccinated while respecting religious freedom,  the legislator leading the effort got death threats. Sen. Elizabeth Steiner Hayward, D-NW Portland/Beaverton, proposed allowing a religious exemption but barring unvaccinated children from entering the public school system, where they could put other students at risk.

Instead, the Legislature settled on requiring families seeking exemptions from vaccination to read about the risk, which Keny-Guyer said didn’t work. The number of unvaccinated children in Oregon continues to go up, Keny-Guyer said.

Hayden and Greenlick both said they intended to protect religious freedoms when it comes to vaccination.

However, Greenlick was blunt in response to a question from anti-fluoridation activist, Rick North, former executive vice president of the American Cancer Society’s Oregon chapter. North claimed that science showed many downsides to fluoridation -- without listing any specifics -- and asked whether the legislators would be willing to meet with him.

“No,” Greenlick told him, calling North’s assertions “nonsense.” “There is not legitimate scientific data on this problem…Don’t waste my time.”

Monnes Anderson and Keny-Guyer said they had already met with North and would be happy to do so again. Hayden and Nosse said their doors are open.

“So far, I have not been convinced,” Keny-Guyer said.

Dec 11 2018
News source:
The Lund Report
Keywords:
legislature, health care, pharma, mental health, behavioral health, CCO
×
This article is for premium subscribers. If you are one, please sign in below.
You can see two more premium stories for free. To subscribe, click here. We depend on premium subscriptions to survive, and they are tax deductible.
Sign InGo Premium Not now