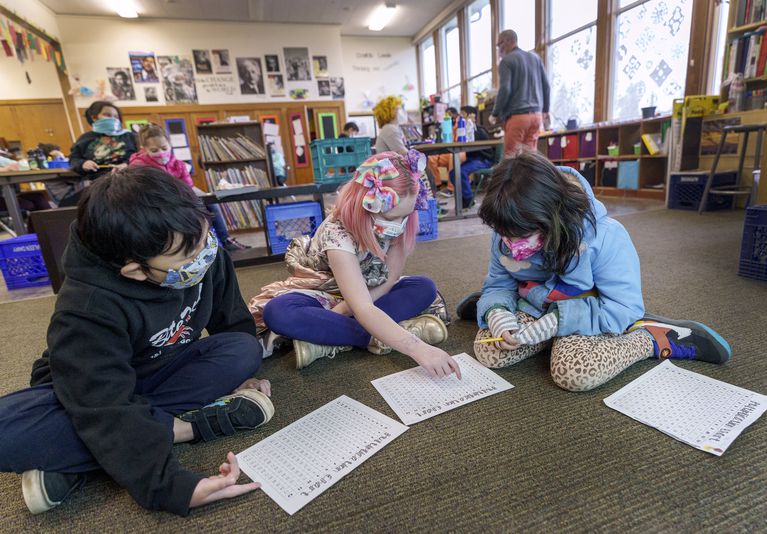 (Left to right) Donovan Cha, Mar Brassea, and Vida Hampson work together to solve a math problem in Eric Marsh’s third-grade class at Prescott Elementary in Portland, Feb. 8, 2022. In Oregon, after March 11, school districts will be free to adopt their own masking policies./Kristyna Wentz-Graff / OPB

The governors of Oregon, Washington and California have announced they will lift their mask mandates for schools on the same date. Masks will no longer be required after Friday, March 11.

For Oregonians, that means the date got bumped up — again.

Just last week, Gov. Kate Brown announced that March 19 would be the final day of the mask mandate for schools.

By the end of last week, however, the CDC had issued its own updated guidance, recommending universal masking in schools only in communities with a high level of COVID-19 risk.

The announcement from the West Coast governors leaves Hawaii the last state in the nation with a mask mandate for schools and no deadline for lifting it.

In Oregon, after March 11, school districts will be free to adopt their own masking policies. State agencies have said they plan to update the rules around testing and quarantine later this week.

The Oregon Health Authority still recommends masking for people at higher risk from COVID-19, including unvaccinated people and immunocompromised people.

And state and federal rules still require people to mask in health care settings and on public transit.