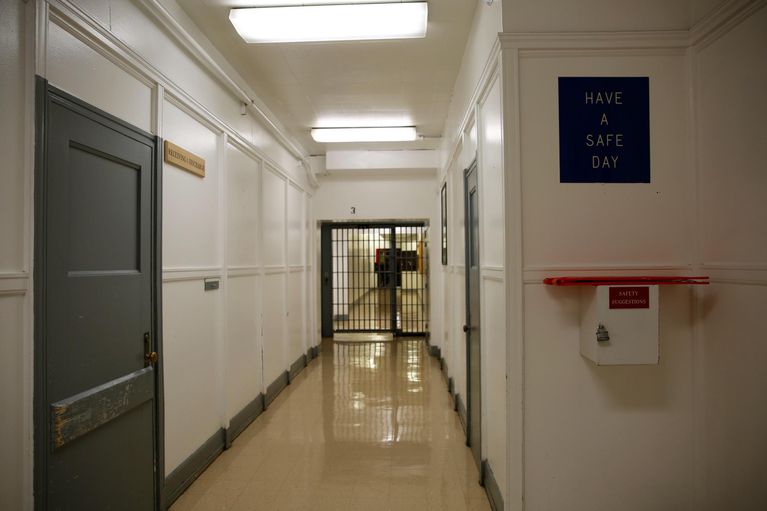 The Oregon State Penitentiary in Salem is the oldest prison in Oregon and the only maximum security institution operated by the Oregon Department of Corrections./Ericka Cruz Guevarra/OPB

The largest active COVID-19 outbreaks in Oregon are in its prisons, according to data from the Oregon Health Authority.

A group of medically vulnerable Oregon prison inmates has asked a federal judge to grant them immediate access to COVID-19 vaccines, according to court documents filed late Thursday.

The inmates first sued Gov. Kate Brown and corrections officials back in April over the state’s handling of the pandemic inside its prisons. On Thursday, attorneys for the inmates asked a federal judge to issue a temporary restraining order that could force the state to give inmates vaccines immediately.

“Plaintiffs request an order requiring [the Oregon Department of Corrections] to offer vaccinations to adults in custody starting immediately, subject to vaccine availability, and to complete the process as promptly as practicable,” the motion states.

State health officials report that the largest active COVID-19 outbreaks in Oregon are in its prisons. For months, the virus has touched every aspect of prison life, where social distancing is nearly impossible. It’s ripped through housing units, infecting those who sleep in open dorms and cinderblock cells alike. More than 3,000 inmates have tested positive for the disease, while 38 have died. More than 40% of those deaths have been this month. Oregon also has one of the oldest prison populations in the country, making it all the more vulnerable to an unprecedented pandemic.

Even with the ongoing legal dispute, some inmates have received their first vaccines. Earlier Thursday, the Department of Corrections said it had vaccinated more than 1,300 inmates, though many were not in line to get the vaccine under the Oregon Health Authority’s current guidelines.

The Oregon State Penitentiary in Salem is the oldest prison in Oregon and the only maximum security institution currently operated by the Oregon Department of Corrections.

The state has set up a system to prioritize vaccinations among certain vulnerable groups. Currently, vaccines are being administered for those in group 1a, which includes corrections employees and inmates who work in health care settings inside prisons. But most inmates are not yet eligible.

On Jan. 16 and 17, prison officials vaccinated 1,343 inmates who were medically vulnerable, older or both, said Department of Corrections spokeswoman Jennifer Black.

She added that they were vaccinated “due to some miscommunication regarding eligibility definitions and timing of certain eligibility categories.”

Any inmates who received their first dose will also get their second dose.

“We anticipate having sufficient remaining supplies for additional staff vaccinations and upcoming second doses for staff and AICs,” Black said.

Currently, inmates are part of what’s called the 1b category. According to the motion filed in federal court Thursday, the state’s Vaccine Advisory Committee has not specified inmates’ priority within that much larger group, which also includes 100,000 teachers and the roughly 800,000 Oregonians older than 65.

“Although ODOC [Oregon Department of Corrections] has accidentally taken some steps to vaccinate its more elderly population, Plaintiffs are aware of no plan or timeline regarding the complete vaccination of Oregon prisoners, and Defendants have so confirmed,” the court documents state.

In essence, the inmates and their attorneys want the Department of Corrections to continue vaccinating inmates, despite the fact that their efforts so far are the result of “miscommunication.”

This week, the prison system hit a grim milestone: it saw its deadliest week yet since the pandemic began. Since Saturday, eight inmates have died from COVID-19.

“Currently, Defendants have the vaccines, but lack the will to give them to all prisoners,” the inmates’ motion states. “That is, definitionally, deliberate indifference.”

This story was first published by Oregon Public Broadcasting and is posted here through a content-sharing arrangement among Northwest media outlets.