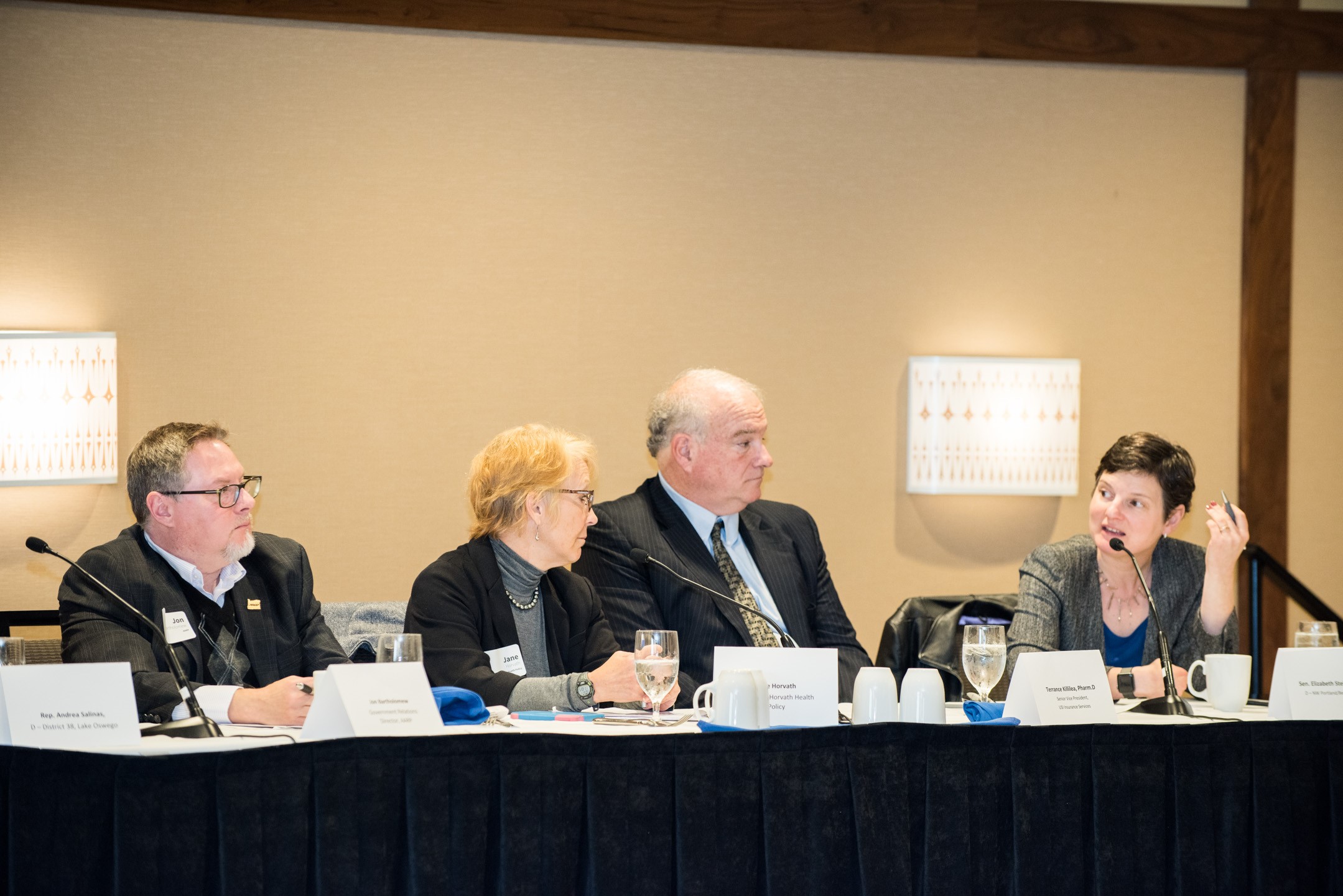 More than 75 percent of people over age 50 take at least one prescription drug, but the average cost of buying name-brand prescription drugs in 2015 was higher than the median income for Medicare patients buying them, said Jon Bartholomew, the government relations director for AARP Oregon.

Drug costs are so high that some people split their pills in half to be able to afford them, Bartholomew said. He was among four panelists who spoke about drug pricing at the Oregon Health Forum, held at the Multnomah Athletic Club. The forum is a sister nonprofit of The Lund Report.

“What everybody in this room can keep doing is keep putting the pressure on” bringing drug prices down, Bartholomew told the audience of 112 people.

Panelists agreed that increasing competition within drug markets and transparency about the actual price-per-pill would help bring drug prices down.

But there’s one big problem: Pricing in the pharmaceutical industry is shrouded in opaque layers and secret negotiations. Drug manufacturers, health insurance plans and pharmacies negotiate drug prices with the help of third parties that have aggregate data about existing drugs, prices and demand. Those middlemen, known as pharmacy benefits managers, often offer health plans much higher prices than the price that they settle on with manufacturers. They also put gag rules in contracts with pharmacies that forbid the pharmacy from sharing the price they got so the health plans can’t know whether or not they got a fair price.

In many cases, pharmacy benefits managers end up selling the drugs to health plans for much more than they paid. Pharmacies can sometimes pay an entirely different rate for the drugs, said health insurance consultant Terrance Killilea, senior vice president at USI Insurance Services and one of four panelists at the meeting.

While increasing transparency could help bring costs down, it won’t solve the problem of high drug costs if the health plans and pharmacies aren’t getting good deals, Killilea said.

“The problem is the lack of competition,” he said.

Increasing competition could be as simple as allowing foreign manufacturers to enter state markets, said Jane Horvath, an independent health policy analyst on the panel.

She said states could increase competition by allowing drugs to be imported from Canada.

“The more effective options in terms of moving the needle in cost is something like importation,” Horvath said.

Another panelist, Sen. Elizabeth Steiner Hayward, D-NW Portland, agreed. The longtime family health physician and adjunct professor at Oregon Health & Science University, said Oregon’s Medicaid system, based on 15 coordinated care organizations, needs a streamlined drug pricing system. Right now it’s fractured. Each  CCO determines which drugs to put on its preferred list -- called a formulary -- and then negotiates the prices for those drugs with a pharmacy benefit manager. That means that the prices that the CCOs pay for different medications can vary even though the rules for determining who can qualify for Medicaid apply to residents statewide.

Horvath said the state could help move the needle on drug pricing on a federal level by setting new rules. That’s what happened when Oregon created children’s health insurance, she said. The federal government later created a national program.

“There is hope that getting action at the state level (will get) the federal government to pick it up,” Horvath said.