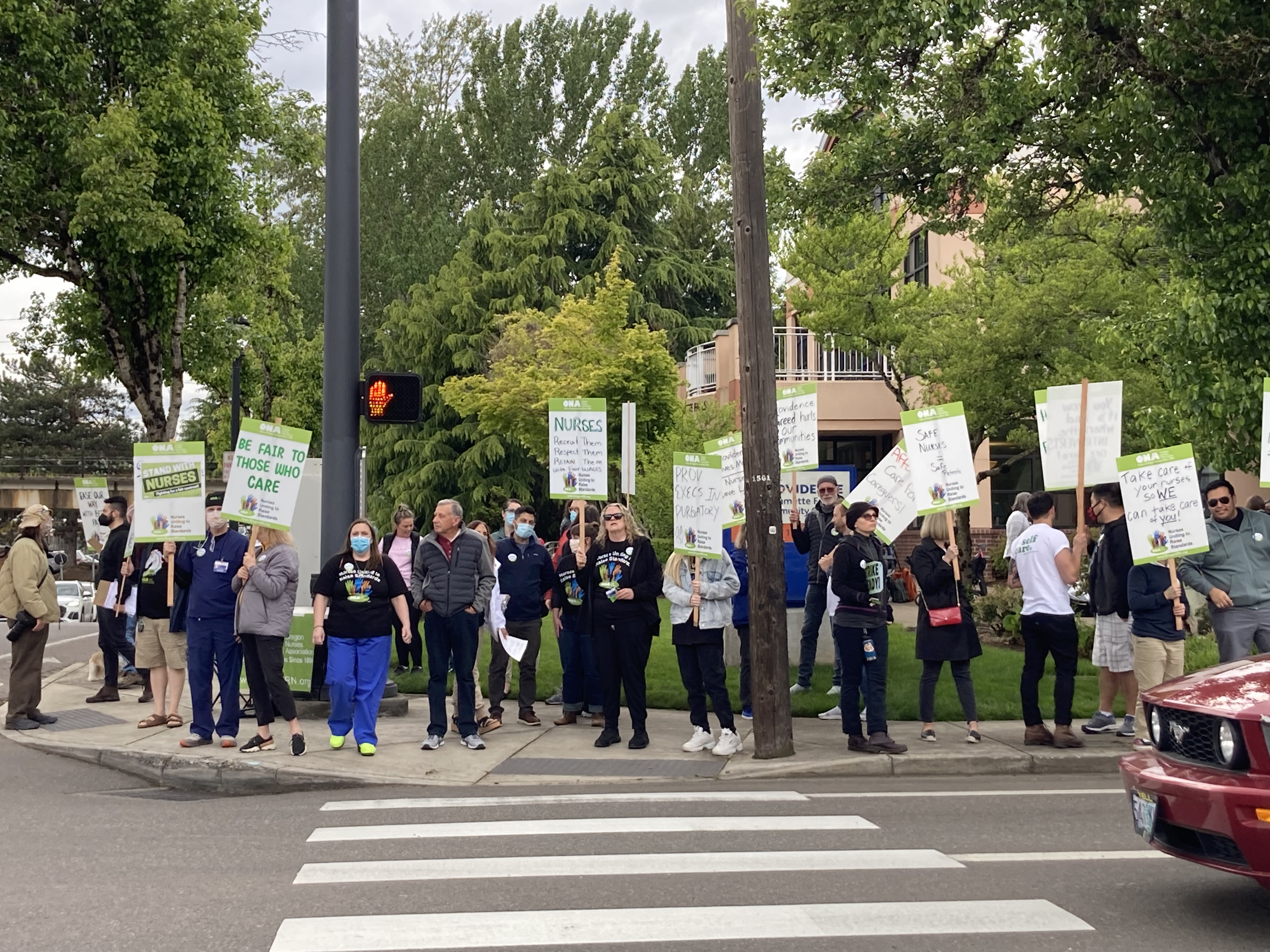 Dr. Devin Lee, a primary care physician who works in a PeaceHealth clinic in Eugene, is among a growing number of health care workers who are turning to unions to gain a voice with their corporate bosses.

Lee is one of 15 physicians, nurse practitioners and other providers at four Eugene-area PeaceHealth clinics who recently signed a letter of intent to unionize. Lee and his colleagues were concerned about inadequate staffing, extended shifts and less time to see patients.

“There's basically what we are told we are supposed to do,” Lee said in an interview with The Lund Report. “And we get to say ‘yes’ or ‘I quit.’ There is no negotiation with it.

“And with a union, it allows us to be in direct relationship with this corporation that we want to work with and we want to excel.”

The state’s health care workers are increasingly turning to labor unions and organizing, bargaining and seeking better pay and working conditions two years after COVID-19 hammered the industry. The shift reflects concerns about safety in the health care industry and is part of a broader push to organize, from logistics workers at Amazon warehouses to baristas at Starbucks, labor and health care observers said in interviews with The Lund Report.

Amid the pandemic, unions pushed the health care industry to provide better working conditions for nurses, physicians and others, becoming an influential voice that draws more interest from health care workers, The New York Times reported.

Asked about the trend in Oregon and the impact of unionization among health care workers, representatives of the Oregon Association of Hospitals and Health Systems and Providence Health & Services had no immediate comment.

In any event, labor actions are taking place in Portland, Eugene, central Oregon and beyond:

“In health care, COVID has changed the urgency and the nature of conversations around unionizing, because the importance is now different,” Mealy said in an interview with The Lund Report. “Looking across the country, we saw nurses battling a pandemic wearing plastic garbage bags instead of PPE and the incredible thing is that they kept doing that. But now that we have distanced ourselves from the initial waves, nurses’ relationship to work has to change. …  Folks have now seen that their employer is not going to provide a safe workplace on its own.”

The trend is occurring after a decades-long trend of hospitals increasingly becoming part of larger corporations with complex management structures that are difficult for individual employees to navigate.

“People are realizing that they can't make a difference by themselves, and they can't afford to sit on the sidelines,” Mealy said. “So we have to work collectively in healthcare. … With larger, multi-state national billion-dollar conglomerates, you can't make change just by walking over to HR or by setting up a meeting with the middle manager or even the president.”

Jana Bitton, executive director of the non-profit Oregon Center for Nursing, said the surge in organizings is not surprising, considering the stress and pressures on nurses during the pandemic and larger labor trends.

The center is working on a study, not yet released, in which most nurses reported work-related stress. According to its preliminary results, 97% of responding nurses reported stress, which could come from factors such as heavy or increased workloads, uncertainty about when the work will settle down or burnout. That’s based on responses from about 5,000 Oregon nurses.

“Nurses are having a really, really rough time out there,” Bitton said. “Now, if one of the solutions that they're going towards is some kind of labor action, that would make sense. That follows with the data.”

Other options for nurses include leaving the field, shifting to a nursing position without bedside nursing or cutting back on hours, Bitton said, adding those choices also impact the nursing workforce shortage.

Organizing In The Digital Age

Health care workers show an increasing interest – and sophistication – when they approach the Oregon Nurses Association, Mealy, the union’s spokesperson, said. They’ve already read about what’s needed and have started the preliminary legwork, he said.

“They come in ready to hit the ground running,” Mealy said. “It's not just an open ended inquiry of interest. They are actively organizing before they reach out to us. That is a big difference from years past, that folks come in knowing what they want, and knowing how to, so it's more of a collaboration from the start as opposed to an education.”

The digital revolution has helped. In decades past, organizing started with one-on-one coffee shop meetings and other in-person meetings. Now, announcements are posted on workplace bulletin boards and in private Facebook groups.

The pandemic-driven shift that normalized Zoom, social media and other online platforms for meetings has, in turn, helped get more workers involved, Mealy said. A health care worker can log into a union meeting at home after their shift without the need to arrange child care, eliminating a prior barrier.

“You could be in your slippers on your Zoom while your kid’s next to you reading a book,” Mealy said, adding this helps nurses and lower-paid health care workers. “Enabling people to do that digitally and virtually is a huge difference-maker.”

That new group, PeaceHealth Providers United, will work with the Pacific Northwest Hospital Medicine Association, which is under the umbrella of the American Federation of Teachers Local 6552. That union, which organized in 2015, already represents workers at  Sacred Heart Medical Center in Springfield.The labor movement has attracted health care workers beyond nurses.

Several months before COVID-19 hit, Lee, the physician, said, the clinics were all staffed appropriately.

The problem now is that attrition has fueled understaffing and extended hours for remaining providers, with “what appears to be little effort to recruit,” he said.

Management practices have changed too. Physicians in charge of an urgent care clinic used to have the authority to shut down a clinic at the end of the day on time if they determined there were too many patients in the waiting room to adequately care for them, Lee said.

That’s no longer the case. Now, a physician seeking to close a clinic for the day with some patients unserved has to call upper management and “play Mother-may-I,” Lee said, noting that some of them have never been a clinical provider.  “We are not given permission … to stop checking in new patients, for the most part, until the clinic closes.”

“It's very challenging to provide the quality safe care that we have been known to provide because of how many patients they are being told to see,” Lee said. He stressed the problem is not with his immediate supervisors, who have a good relationship with staff.

As medicine becomes corporatized, the dynamic for medical doctors changes. For the bulk of medical history, a large portion of doctors had their own private practice, with control over their business and practice.

That has changed in recent decades as health systems increasingly acquire physician practices.

“All of that has been shifting to a more employed model,” Lee said. “We then lose the autonomy – this lone ranger perspective – that a lot of primary care doctors have.”

In a statement, PeaceHealth officials said the organization values its direct relationship with caregivers and providers and respects the rights of its employees regardless of whether they join a union or not.

“The COVID-19 pandemic has presented extraordinary challenges for everyone serving in healthcare,” PeaceHealth said in a statement. “Despite this fact, by working directly with our caregivers and providers PeaceHealth has been able to maintain or improve performance on safety and quality across our medical centers. …We look forward to further engaging with our valued providers on this important topic and reinforcing our commitment to them, and to the patients we serve.”

In an interview, Eggleton said pay equity is needed so the hospital can recruit and retain staff, with an eye toward reduced workloads.

At times, she’s responsible for caring for nine patients in her unit and may get pulled to elsewhere to assist.

“You can’t even give the quality care to every patient” that is necessary, she said.

Her duties include helping patients shower and changing their diapers.

Eggleton said the hospital should be able to pay its workers competitive wages, stressing they aren’t trying to be rich – just earn a living wage compared to their peers in other hospitals.

“They can afford to take travelers (nurses),” she said. “But they can't afford to appreciate their workers there for the longest time. How does that even make sense when it comes to appreciation?”

Samaritan has proposed across-the-board wage increases for each year of a proposed three-year contract. Samaritan has also proposed increases to shift differentials – extra pay per hour for work performed on evenings, nights and weekends – that are equal to or greater than other SEIU contracts within Samaritan.

“We are committed to providing quality health care to the community and to be an employer of choice by continuing to offer market-based competitive wages and benefits,” said hospital CEO Dr. Lesley Ogden, in a statement. “We appreciate our staff who work diligently to care for patients and who work with pride and professionalism. We are eager for them to begin receiving their much-deserved pay increases.”

Jun 21 2022
News source:
The Lund Report
Keywords:
unions, patient safety, workforce
×
This article is for premium subscribers. If you are one, please sign in below.
You can see two more premium stories for free. To subscribe, click here. We depend on premium subscriptions to survive, and they are tax deductible.
Sign InGo Premium Not now