The state agency has hired 862 more employees since 2013 and increased salaries on upper management by 18 percent, helping to drive a 29 percent overall increase in payroll.
By:
Chris Gray

The Oregon Health Authority has increased spending on employee salaries by 29 percent since 2013, including an 18 percent increase on the salaries of upper management, even as it forecasts a hole of $1.1 billion for the 2017-2019 biennium.

The agency’s  budget hole was made public in August, and was used as a key factor in Oregon Democrats’ push for a $5 billion corporate tax increase, Measure 97, which went down in flames on Nov. 8.

OHA’s salary pot has increased from $202 million to $262 million in three years as payroll has increased from 3,700 to 4,562 full- and part-time employees, even as the state has moved to decentralize its Medicaid program through coordinated care organizations.

The median household or family income for all Oregonians is just under $65,000, according to the Oregon Office of Economic Analysis. The mean annualized salary at OHA has risen only slightly from $55,000 to $57,000, according to salary data provided by the Department of Administrative Services.

The number of Oregon Health Authority employees pulling down at least $99,000 has increased 76 percent to 261 people. This contingent includes a large number of physicians at the state hospital, but almost half of the growth in this group is from management -- up from 76 in 2013 to 125 in 2016.

The highest paid OHA employee is Dr. Rupert Goetz, the chief medical director at the Oregon State Hospital, at $263,000. The second-highest paid manager is Dr. Greg Roberts, the hospital superintendent, at $236,000.

The upper management group includes Saxton, who at $181,000, makes modestly more than her predecessor, Dr. Bruce Goldberg, who was paid $171,000.

The restructured agency has 15 managers making more than $150,000, roughly the same as the 14 managers making at least $140,000 in 2013. But these managers do not fulfill exactly the same roles as under the Goldberg structure. In her expanded role as external relations director, the agency’s chief spokeswoman, BethAnne Darby, makes $154,000 compared to $114,000 for her predecessor, Patty Wentz. 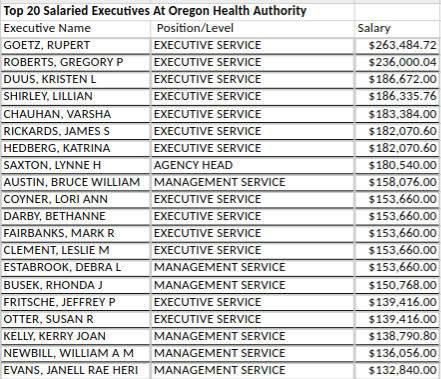 As an alternative to Measure 97, Republican gubernatorial candidate Bud Pierce made curtailing the growth of middle managers in state government a plank of his failed campaign.

Gov. Kate Brown is unlikely to go that route when she releases her 2017-2019 budget on Thursday, but if she wants to raise any revenue, she’ll need Republican support in the Legislature.

The Democratic grip on that branch of government slipped in the recent election, as Republican Alan DeBoer won the open Senate seat in Jackson County, ending the Democrats’ short-lived supermajority in the state Senate.

Furthermore, Democrats in blue-collar districts won by President-elect Donald J. Trump have exerted their independence from their party, with Rep. Brad Witt, D-Clatskanie, and Sen. Betsy Johnson, D-Scappoose, both endorsing Republican Dennis Richardson in his successful run for secretary of state.

Example of this increase - The transformation center

The transformation center is a good example of this sharp increase in management positions in the past 2 years or so. The director  of the TC used to have about 15 direct reports a couple of years ago. Instead now, the Center has 14 people working for it including 3 managers, so one manager for less than every 4 people. The majority of the non-management positions at the TC are at a level 4 (the highest in the non-management series) where the salary range tops out at over $95k. At this level, these employees are supposed to be operating pretty independently and should not need a manager for every 4 employees. Hopefully as the agency faces budget decreases ahead , Mrs. Saxton  looks at these new management positions and what value they are adding to the agency for potential cuts instead of cuts to services and non-management staff (that actually do the work).