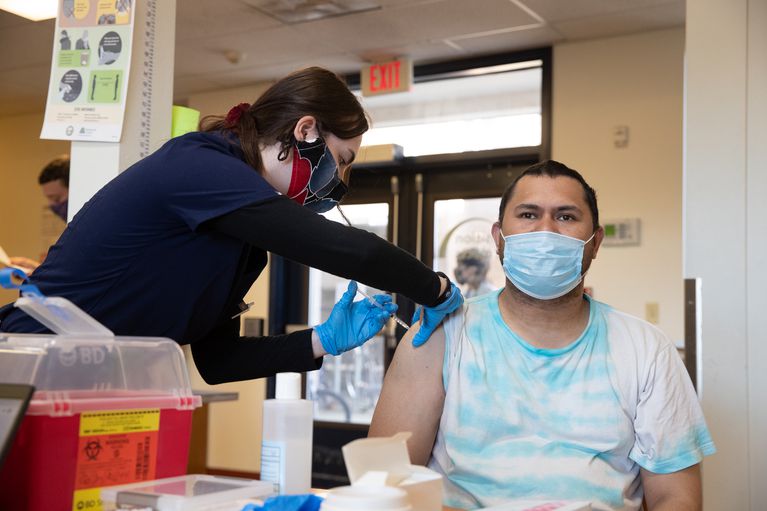 Oregon officials are touting their new goal of vaccinating 80% of the adult population of communities of color against COVID-19 by the end of the summer. But the state’s latest numbers suggest it’s highly unlikely that goal will be reached.

The state says it needs to vaccinate nearly 250,000 more Hispanics, Black people and other communities of color to reach the percent rate target by Aug. 31. That’s about 5,700 people a day. But the current vaccination pace for minorities is just 481 a day, according to Oregon Health Authority data. At the current pace, it would take more than a year to reach 80%.

Still, health agencies are forging ahead, using novel ways to get vaccines into minority communities as part of what the health authority calls a “vaccination equity strategy.”

Community groups are playing their part. For example, a Lincoln County mental health nonprofit contacted the Hispanic owner of a Newport grocery store, which culminated in a recent vaccination clinic in the store’s parking lot, OHA said.

An OHA blog post quotes Juan Hernandez Marquez, owner of the store, saying he initially was reluctant to get vaccinated. But now, he says, his store, La Juquilita, distributes information about the vaccine.

“I was one of the people who didn’t want to get vaccinated,” Hernandez Marquez told OHA. “There is a lot of false information out there… but you never know when (COVID-19) going to impact you and it could lead to a very bad outcome.”

Despite months of public relations campaigns, vaccination rates remain especially poor in Oregon’s Hispanic and Black communities. Just 45% of Hispanics and 47% of Black people are vaccinated, according to OHA data.

To reach the 80% vaccination rate by Aug. 31, some 3,300 Hispanic people and nearly 800 Black residents would need to be vaccinated daily, OHA data show. The current pace is far short of that: The seven-day running average vaccination rate is now 270 a day for Hispanics and 75 for Blacks, according to the data. To reach 80% vaccination, another 144,000 Hispanics and 33,000 Blacks need to get vaccinated, the state estimates.

Oregon vaccination rates vary widely based on race, according to OHA data of vaccinations for those 18 and older.

Hawaiians and Pacific Islanders are the most heavily vaccinated, at 81%. That’s nearly 24,000 out of nearly 30,000 state residents.

No one can definitively explain the discrepancies between the races. Some experts have attributed them to everything from lack of transportation to vaccination sites to skepticism about the vaccine and mistrust of the government. Low-income residents – including Blacks and Hispanics – for example, may have trouble getting transportation to vaccination sites or fear side effects of the vaccine that could make them unable to work for a number of days.

The OHA data underscore the slog that lies ahead for health care providers, community groups and activists who are trying to persuade more minority members -- and whites -- to get vaccinated.

OHA’s latest seven-day running average shows just 4,800 people a day getting vaccinated. The state needs that to top 16,000 a day, if Oregon  is to have a shot at reaching 80% vaccination for all racial groups by the summer’s end.

Jul 20 2021
News source:
The Lund Report
Keywords:
minority, hispanic, Black, white, vaccine, OHA, covid
×
This article is for premium subscribers. If you are one, please sign in below.
You can see two more premium stories for free. To subscribe, click here. We depend on premium subscriptions to survive, and they are tax deductible.
Sign InGo Premium Not now