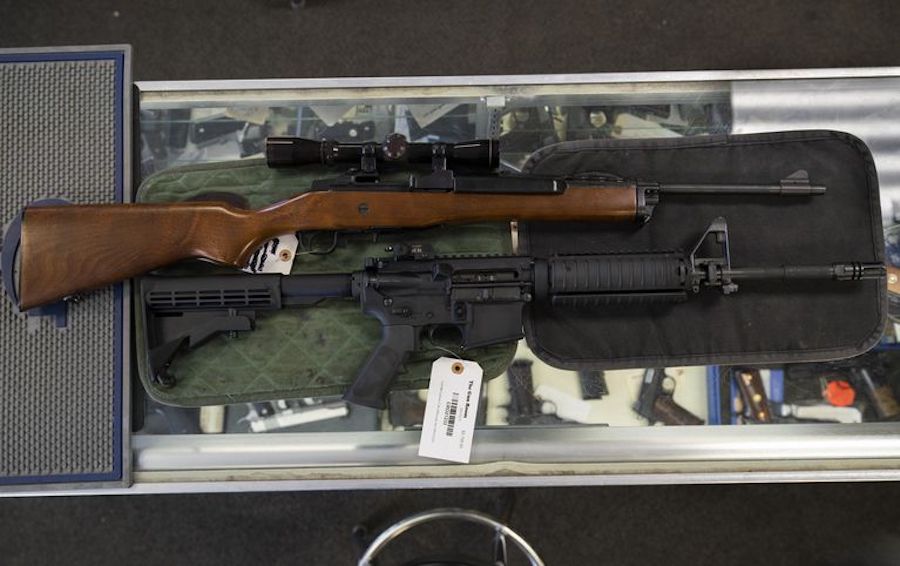 Firearm injuries in Oregon nearly doubled from 2019 to 2021, according to data collected from emergency rooms in hospitals across the state. Two firearms, the Ruger Mini-14 (top) and the AR-15, are shown in this Oregon Public Broadcasting file photo./Jonathan Levinson/OPB

This article was republished from Oregon Public Broadcasting.

The number of firearm injuries treated in Oregon emergency departments nearly doubled from 2019 to 2021, according to a statewide report from Oregon Health & Science University.

The report was compiled by the Gun Violence Prevention Research Center at OHSU, a new project focused on using public health data to prevent firearm injuries. Researchers looked at reports of injuries submitted by hospitals to an outbreak detection system known as OR-ESSENCE.

The risk of being injured by a gun is by far the highest for men in the 25-44 year age group.

The greatest number of firearm injuries were treated in the Portland metro area. But some rural counties — including Douglas County and Jefferson County — had the state’s highest per capita rates of emergency department visits for firearm injuries.

The researchers also tried to look into what was causing firearm injuries.

In about 40% of cases, the data included enough information for researchers to determine why a person had been shot. Unintentional shootings were the most common, followed by assaults and self-harm.

Kathleen Carlson, director of the Gun Violence Prevention Research Center, said she is trying to learn more about the contexts in which unintentional firearm injuries are occurring in Oregon. She suspects the issue may be particularly acute in rural parts of the state where guns are widely considered a tool of everyday life, but where many people have not had recent training or adopted the safety culture that’s found in many gun clubs and shooting ranges.

“The injuries we read about in the electronic health records strike me as injuries occurring where safety may not be prioritized in the way that safety is taught in those facilities,” she said.

Carlson said she doesn’t yet have any data on how well gun safety training works in Oregon, but she thinks training requirements are among the strategies that could reduce injuries.

“There are ways to systematically prevent people from hurting themselves if you can look at it from a systems lens, rather than an individual and negligence kind of lens,” she said.

Safety classes are among the requirements listed in a proposed new gun regulation measure under consideration by Oregon voters this fall.