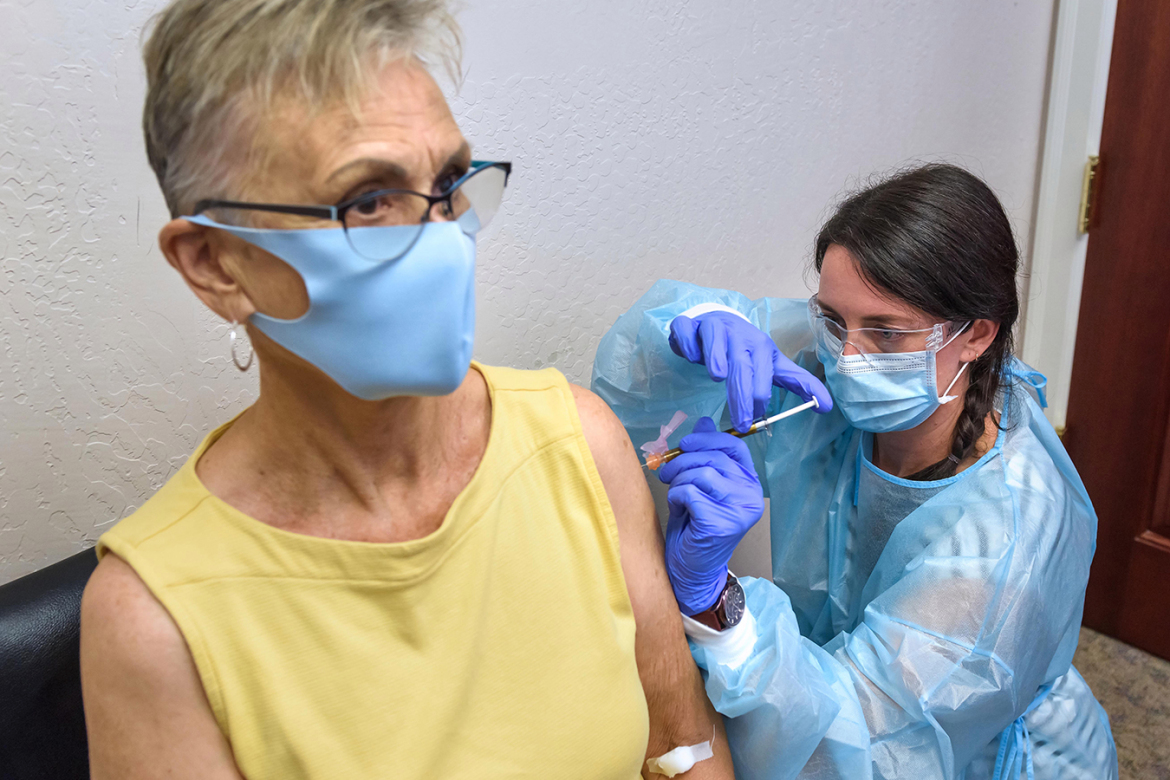 Oregon officials are hastening their vaccine rollout so that vulnerable groups like frontline workers and people with underlying health conditions can quickly start to receive COVID-19 vaccinations before the general population becomes eligible on May 1.

The changes are an aggressive move as the state prepares for an increase in vaccine shipments from the federal government.

State officials say that by the end of May, every Oregonian who wants to be vaccinated will have received at least one dose. Two of the three vaccines -- Pfizer and Moderna -- require two doses three or four weeks apart, while the Johnson & Johnson vaccine requires just one dose.

The stepped-up plans come in response to a federal directive to make everyone eligible for the vaccine by May 1.

State officials had no estimate of how many Oregonians will be fully vaccinated by the end of May.

But for the coming few weeks, the state is still focusing on specific groups that it sees as being vulnerable.

“As we open up eligibility to all Oregonians on May 1, I remain committed to the equitable distribution of vaccines,” Oregon Gov. Kate Brown said in a press conference on Friday.

Although the accelerated schedule is good news for groups that have been anxiously awaiting their turn, officials stressed there is more demand than the vaccine supply can instantly meet, so people who are eligible may still have to wait for an appointment.

On Monday, migrant and seasonal farm workers can begin to receive vaccinations in counties where they work, one week ahead of their previous March 29 eligibility date.

The state also is allowing counties that attest that they have inoculated the majority of their senior populations to immediately move onto their next groups: adults 45 and older with underlying chronic conditions like heart disease, asthma and obesity; front-line workers in specified industries, including seafood and food processing; wildland firefighters; people displaced by the 2020 wildfires; and people living in low-income housing, congregant settings and the homeless. These groups are still scheduled to become eligible on March 29 unless their county moves them up.

On April 19, other frontline workers, multi-generational households and people 16-44 with underlying health conditions will become eligible. The state originally planned to make them eligible by May 1. The state defines multi-generational households as those with three or more generations or those with someone 50 years or older who cares for a relative who is not their child, such as a grandchild, niece or nephew.

Then, as the final step, everyone 16 and older will be eligible May 1. No vaccine has yet been approved for children. Only the Pfizer-BioNTech vaccine is approved for those 16 and older. Patients have to be at least 18 years old for the other two vaccines.

The schedule “doesn’t mean every Oregonian will be able to get a shot right away,” Brown said.

However, Brown and public health officials appear confident that everyone who wants to be vaccinated can have at least one by the end of May. With the two principal vaccines -- Moderna and Pfizer -- requiring a second dose, that means substantial vaccination work will continue into June and longer.

Unclear When Herd Immunity Will Be Reached

Now, officials are wondering how long it will take for the state to achieve herd immunity, when enough of the population is vaccinated so that the virus begins to die out.

Scientists say that herd immunity against the novel coronavirus will be reached when 70% to 80% of the population is immune. In Oregon, that would be about 3.3 million people out of the state’s population of 4.2 million. But because no vaccine exists yet for children, the state would have to achieve vaccination of virtually all of its 18-and-over population of 3.2 million in order to technically reach the herd immunity threshold. Sixteen and 17-year-old Oregonians will be eligible for doses, but the state doesn’t have specific figures on how many residents are of this age.

Officials say some residents may be hesitant to get the vaccine. As demand ebbs, officials may have to look harder for people willing to get a dose.

So far, nearly 939,000 Oregonians have received at least one dose and more than half a million people -- about 12% of the population -- is fully vaccinated, according to Oregon Health Authority Director Patrick Allen.

About 58% of all seniors are now vaccinated, with higher rates among older groups that became eligible sooner. Allen said the state expects to have more than seven out of every 10 seniors vaccinated by March 29.

In some counties, Allen said, “we may be seeing some cooling of demand as we get deeper into the senior population.”

Allen said Oregon will be able to keep up with shipments of 250,000 or more doses a week, starting in April, but it will take several weeks for supplies to catch up to the demand.

By May 1, Oregon officials expect they will have received a total of about 2.5 million doses.