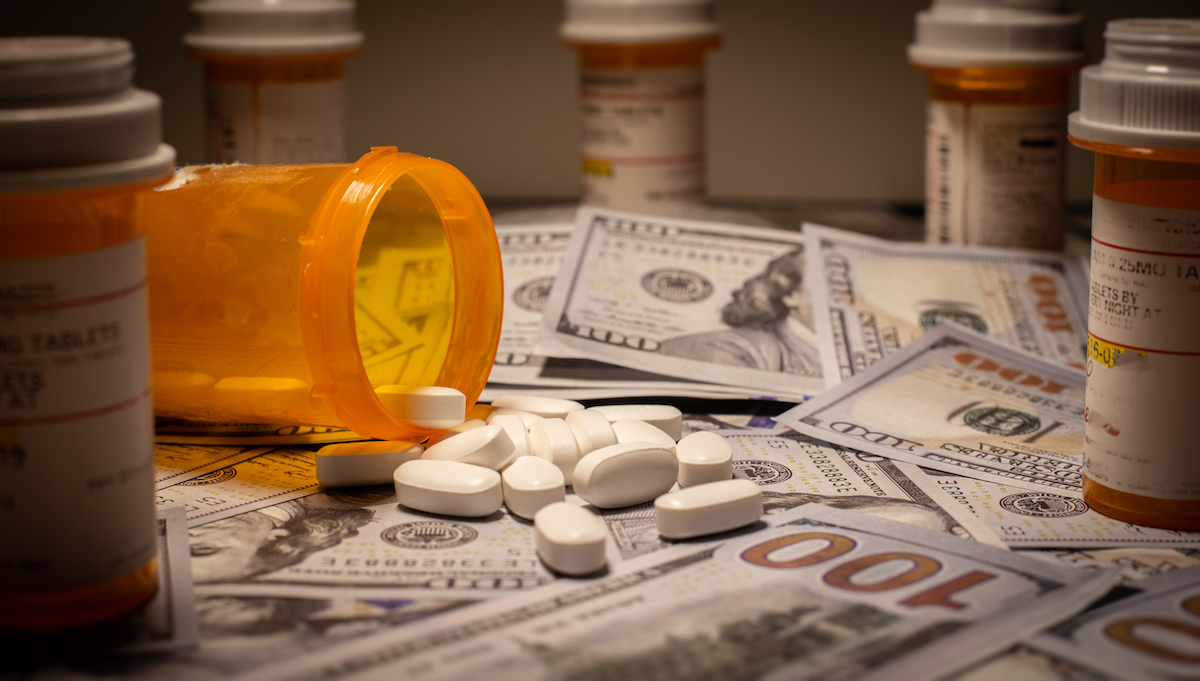 Negotiations over Oregon’s share of a national opioid settlement have reached an impasse, and it could be costly for Oregonians.

Lawyers for local governments and Gov. Kate Brown are grappling behind the scenes over funding from a $26 billion national opioid legal settlement that is intended to battle addiction and overdose deaths.

Oregon’s share — to be paid by three large companies that distributed opioids as well as by the Johnson & Johnson pharmaceutical company — could reach $330 million under the settlement’s complicated structure. But only if all the lawyers work together.

Now, with only weeks of negotiation time left before a key deadline, lawyers for local governments are going public. They say if the Brown administration won’t compromise and give local governments more say, the locals are willing to walk away from the settlement. That, they claim, would cut the money coming to Oregon in half — if not scuttle the entire deal.

“The proposed settlement is an once-in-a-lifetime opportunity to make a real difference for Oregonians and communities that continue to suffer through the opioid epidemic,” said Tom D’Amore, a Lake Oswego attorney representing Washington, Lane, Clackamas, Clatsop, Yamhill, Jackson and Josephine counties. “The state has unnecessarily put at risk the entire $329 million if the opioid distributors do not go forward with the agreement because the cities and counties are not included.”

A spokeswoman for the state’s lawyers responded in a manner suggesting they feel the local governments are the problem, and if they walk away, it’s their fault. The state is content with a default funding split included in the deal — the same one that the locals say will make them walk.

“We would like to work out a fair and equitable intrastate allocation plan with all interested parties that would maximize the benefit to our state,” said Kristina Edmunson, communications director for the Oregon Department of Justice. “However, we are also willing to work with the default allocation plans provided in the agreements.”

The public brinksmanship in Oregon is extremely unusual. In the more than 40 states that are a part of the proposed national agreement, about half have already reached agreement between the locals and the state, and negotiations in many other states are under way.

A History of Suffering

The opioid epidemic has its roots in the pain management movement that began in the 1980s. Purdue Pharma, a company owned by the Sackler family that made oxycontin, hydrocodone, fentanyl and other potent drugs, was later found to have engaged in unlawful marketing tactics that resulted in distribution of their potent painkillers far beyond the medical need, helping addict millions of Americans and causing hundreds of thousands of overdose deaths.

In the last four years, litigation against the firm has reached its peak. In 2017, Multnomah County commissioners approved a resolution to pave the way for their own lawsuit. Their resolution stated, “Public resources have been overtaxed and diverted in an effort to combat the ongoing opioid epidemic,” saying demand for treatment and services “greatly exceeds the supply of those resources. In addition, substantial public dollars have been, and continue to be, directed toward the prosecution of crimes directly attributable to opioid addiction and the subsequent incarceration and supervision of people in Multnomah County on opioid-related charges.”

Among the numbers cited: In Washington, Clackamas and Multnomah counties combined, local pharmacies handed out 1.4 million opioid prescriptions in 2015 alone. That’s almost one per resident. And Multnomah County ambulances were responding to nonfatal overdoses nearly twice a day, with more than 100 fatal overdoses per year.

Nationally, opioid litigation is essentially the second coming of tobacco litigation, with a large pot of money going to state and local governments to use on behalf of their communities.

While Purdue has filed for bankruptcy, state and local governments continue to sue other entities that they say facilitated and furthered the opioid epidemic, including Johnson & Johnson and the three distributors: AmerisourceBergen, Cardinal Health and McKesson.

The $26 billion settlement would be paid over 18 years, and covers nearly all the opioid litigation being waged around the country. A federal judge in Ohio is overseeing its finalization.

Johnson & Johnson and other defendants structured the proposed agreement to try to make all the lawsuits go away. That means the most incentives go to the states where potential litigants cooperate — and come together quickly.

The ongoing battle in Oregon between local governments and the state over allocation of the funds is one over control and how the money is spent.

The state would prefer safeguards that go beyond the vague national settlement. The agreement’s language says simply that it is “the intent of the parties” involved that the money be spent on opioid prevention and treatment. The state wants a strictly regimented process in which the locals would apply to the state for grants, according to the local government lawyers.

“Oregon’s historic lack of coordinated addiction and recovery services means services are not always available to Oregonians affected by substance use disorder — and their families — when they are needed most,” said a statement released by Attorney General Ellen Rosenblum, who oversees the state justice department. “This has created disparities in access to services for rural Oregonians, people of color, older adults, persons with disabilities, low-income families, and other marginalized communities.

“Our national opioid settlements will provide us the opportunity to invest in statewide addiction and recovery services in an unprecedented way. Deciding how we spend these funds is a crucial policy matter and will have far-reaching implications.”

The state seems to want something similar to the process already in place for funds generated by Measure 110, and local officials suspect the state wants to use the same process. However, they describe it as opaque and burdensome, involving lengthy legal agreements and threatened audits. They argue that a significant portion of the funds would go to support the state’s bureaucracy, rather than going to the people who need it.

The local governments want a larger share of the funds to come to them in the form of direct payments, which would bypass the state bureaucracy and give them more leeway in how to spend the funds.

“At the end of the day, it’s the local agencies that work with people to overcome opioid addiction and reduce opioid use in their communities,” said Lane County Counsel Steve Dingle. “If we want a shot at making things better in Lane County, we need the ability to put this settlement to use quickly and efficiently — not spend the next few years filling out forms and begging for funding that was earmarked for us already.”

Local attorneys find the state’s desire for control ironic, considering the Brown administration never joined the litigation that’s now being settled — instead leaving it to the locals and other states to wage battle in court.

The city of Portland, along with Multnomah County, is on board with the effort to win a deal they like better.

“The City of Portland has been seeking to work with the State and other localities to obtain an intra-state allocation agreement for over a year,” said Portland City Attorney Robert Taylor in an email. “There is a pending January 2, 2022, deadline, so the urgency of this matter is increasing and we hope the State and other parties will bring renewed focus to this matter given the deadline.

“The City of Portland prefers direct payments to local government because it will ensure that the money gets where it needs to go faster. There are already limitations in place that ensure that money goes toward opioid abatement.”

Another driving force in the impasse is over who will pay the attorneys’ fees that have been racked up by local governments that — unlike the state — filed to sue the group of national defendants, including D’Amore’s clients as well as Multnomah County and the city of Portland.

Typically outside lawyers invest resources in litigation under a contract that guarantees them 25 to 33% of any winnings. The federal judge in Ohio who is overseeing the national settlement has capped those contingency fees at 15% of any winnings, and attorneys have agreed. But the settlement itself provides for roughly half of that, or 7%, leaving states to hash out the details of how the difference is paid.

In Oregon, the disagreement between the state and locals over attorney fees comes down to how much of the difference will be paid out of Oregon’s portion of the settlement funds and broadly spread out between jurisdictions — as opposed to the bulk of them being paid by the localities that hired lawyers

The state allocation agreements being adopted in dozens of states are being used to spread the legal costs more evenly, whereas Oregon appears to be taking a hard line.

Regardless of what happens, non-litigating local governments are likely to help the ones that hired lawyers cover the difference to help reach their 15% fees. But if the justice department and local governments don’t reach an agreement, state coffers wouldn’t need to contribute to support the attorneys’ costs. The attorneys feel that scenario would be unfair, arguing the state would reap much of the benefits of their work without having filed in court.

With a looming deadline of Jan 2, 2022, for locals to sign on to the agreement, there’s little time to work things out. The real-life deadline for agreement translates to mid-November, because city councils and county commissions would have to vote on the settlement before mid-December to cope with holidays and vacations.

The locals can sign on later, but by then, a large chunk of their funding would have gone straight to the state under the terms of the agreement, which front-loads the payments over the first three years.

Local governments say if they don’t get agreement in the coming weeks, the effects will be irreversible. They’ll continue their lawsuits and hope for a better deal from the defendants, according to Lane County Counsel Dingle and some other attorneys.

These lawyers say they have obtained agreement from the counties and cities that are home to the vast majority of Oregonians. They intend to stick together.

“If the State won’t step up for Oregon communities,” Dingle said, “Lane County and its partners will.”