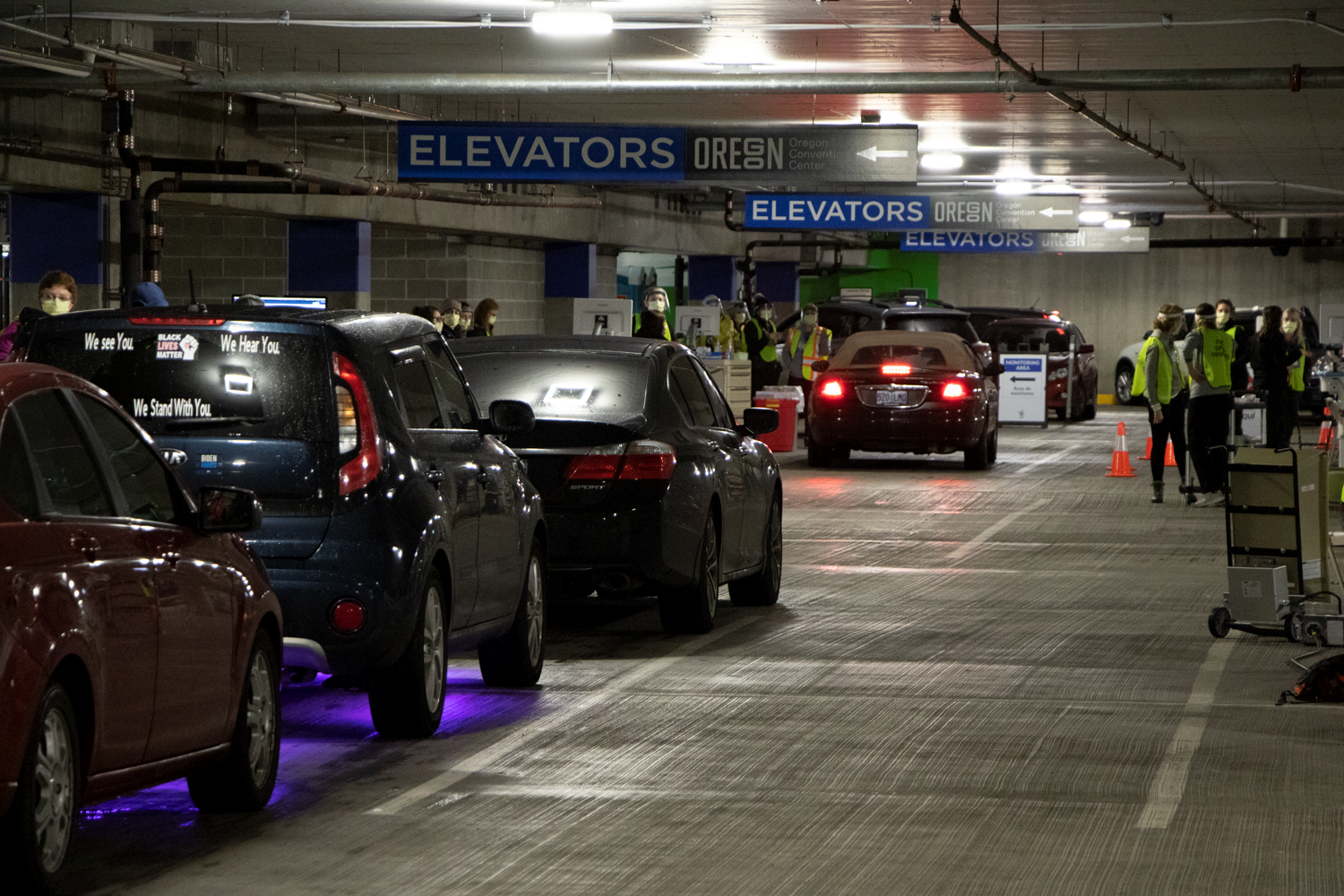 Hundreds of people were vaccinated at a drive through clinic at the Oregon Convention Center in Portland./Josh Andersen/OHSU

Oregon’s priority list of those eligible for the COVID-19 vaccine could potentially triple following recommendations by the state’s Vaccine Advisory Committee.

At the end of a two-hour meeting on Thursday, the group decided that those next in line for a vaccine should be:

In other words, a lot of people.

The state has already included about 500,000 people in the top 1a tier: health care workers, dental professionals, emergency services, correctional staff, long-term care and residential group home residents, hospice workers and caregivers of medically fragile children or adults who live at home. Gov. Kate Brown added educators and staff in daycares, preschool and K-12, another 115,000. Then this week she threw in those 65 and older -- about 750,000 people - following a recommendation by the U.S. Department of Health and Human Services, which promised stepped-up deliveries of stocks.

The committee’s recommendation would add 900,000 members of communities of color and 1.6 million with chronic conditions, according to Brown’s office. And that’s not including the others on the list.

In all, the priority lists now total about 3.9 million people, in a state with 4.2 million.

It’s not clear how quickly the vaccine will arrive, however. On Friday, Brown announced that a promise from the U.S. Department of Health and Human Services that increased shipments would begin flowing quickly was false.

“I am shocked and appalled that they have set an expectation on which they could not deliver, with such grave consequences,” Brown said in a statement. "This is a deception on a national scale. Oregon’s seniors, teachers, and all of us were depending on the promise of Oregon’s share of the federal reserve of vaccines being released to us."

Patrick Allen, director of the Oregon Health Authority, said the lack of supplies puts Oregon’s expanded vaccine plans “at grave risk” and means that the next group up - those 65 and over - will not be able to be vaccinated as planned starting Jan. 23.

Nevertheless, the committee has sent its request to the health authority which now faces the prospect of deciding who to add next to the priority list that holds an empty promise of vaccination.

Rachael Banks, Oregon’s public health director, said the group appeared to agree that communities of color “should be prioritized based on the data before we get to the general population.”

But several members of the committee see the platform as an opportunity to redirect Oregon’s public health system.

Dr. Kelly Gonzales, an associate professor at Portland State University who specializes in health disparities, said the committee’s recommendations should include an acknowledgement that minorities have been ignored in the past.

“We’re doing this for transformation so that we can counter historic racism,” Gonzales said, referring to the committee process.

Aileen Duldulao, representing the Oregon Pacific Islander Coalition, agreed: “This is an opportunity for education and transformation for us to actually show why this (demographic) group needs to be prioritized.”

The BIPOC group was moved to the top of the list -- but a statement from Gonzales saying that “public health needs to acknowledge that racism is a public health crisis” was removed.

Others were more concerned about practicalities.

Zhenya Abbruzzese of Adventist Health asked whether there were even enough vaccines to cover educators and those 65 and older, while Leslie Sutton, policy analyst at the Council on Developmental Disabilities, said that people with developmental disabilities who already are in the 1a group are being rejected by vaccine clinics.

“I just want to make sure that we have going forward a commitment from the Oregon Health Authority that when this Vaccine Advisory Committee acts and says who is in the next phases that you will implement that with partners in a way that makes that real, because otherwise we are providing empty hope to people that need it most,” Sutton said.

And Sandra McDonough, CEO of Oregon Business & Industry, the state’s largest business association, asked the health authority to explain how it’s vaccinating people and reaching out to minority groups.

Banks acknowledged that some people had been turned away and that Oregon did not have enough doses for everyone on the priority list.

“It will take a long time to match those up,” she said. She advised the panel to recommend priority groups for the state to use when more vaccine becomes available.