Dental health aide therapists are trained to cover 50 procedures that a full dentist can do, helping poorly served native communities increase access. But the dental system in general is plagued by an approach that triages the symptoms of disease rather than preventing and eradicating tooth infections.
By:
Chris Gray 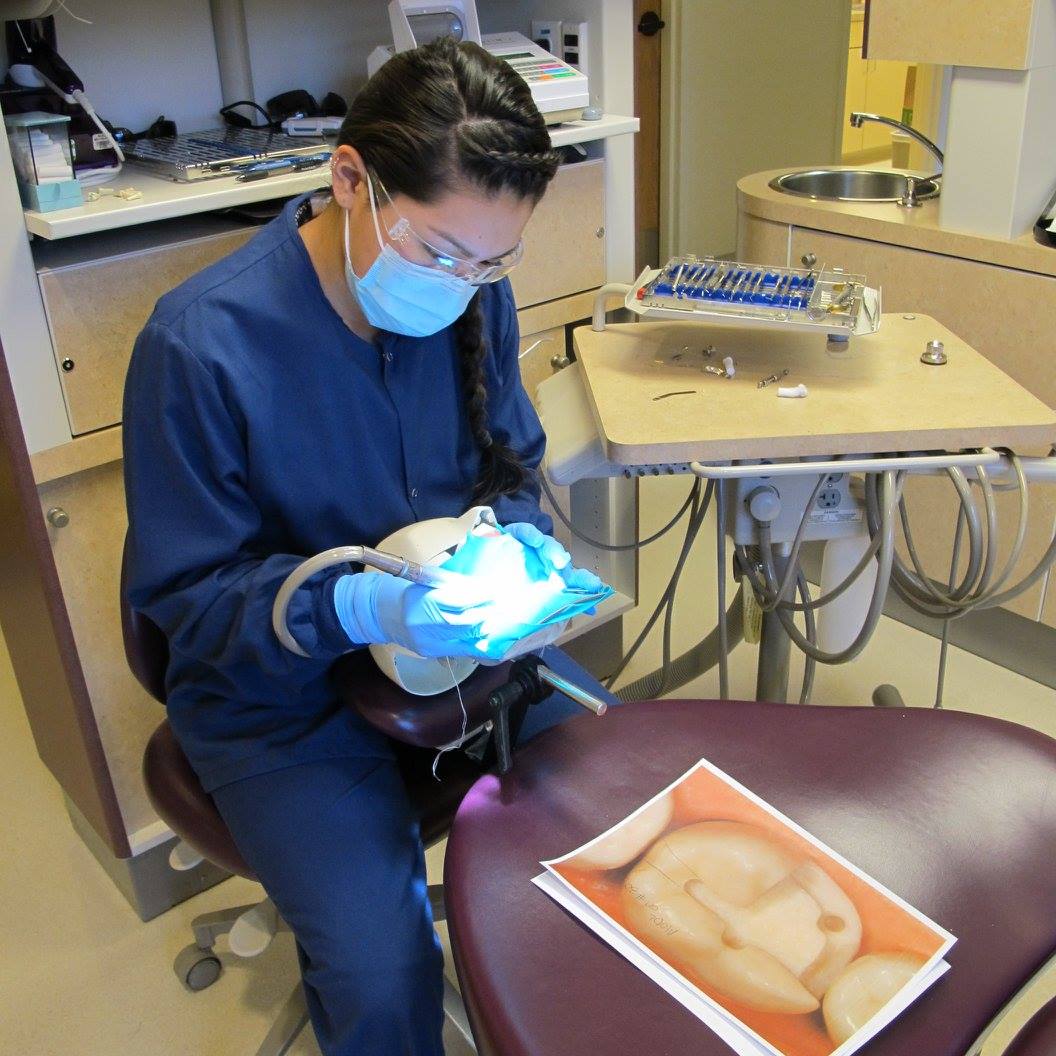 American Indian children are twice as likely to have tooth decay as black or Latino children, and almost four times as likely as non-Hispanic white children, according to the National Health and Examination Survey.

Despite the job title, dental therapists don’t simply make you feel good about your teeth; they’re educated in about 50 dental procedures and work under the supervision of a dentist, similar to the relationship between a physician assistant and a medical doctor.

Dental health aide therapists can clean teeth, but they aren’t meant to replace dental hygienists -- they instead focus on routine dentistry, including fillings and simple extractions, while leaving more complicated work such as root canals and bridges to full-on dentists.

The dental health aide therapist position was established in Alaska among its native community in 2005; years of substandard dentistry had made natives suspicious of outside dentists and volatile funding made it hard to get dentists to stick with their positions in far-flung Alaska Native communities, according to Pam Johnson of the Northwest Portland Area Indian Health Board.

“The delivery system was not working for villages in Alaska,” said Johnson. “There is a shortage of dentists who will serve Medicaid and public assistance.”

The Alaskan dental health aide therapists often come from the native community, they are educated in dental practice for two calendar years -- with the workload equivalent of three academic years.

The American Dental Association has opposed allowing dental therapists to practice, but access demands are causing that dam to break. First Minnesota and now Vermont are opening the door to mid-level dental providers. Oregon has adopted a pilot project to assist its American Indian tribes with integrating these mid-level dental practitioners into its community health systems. The pilot is a compromise that local dental associations have accepted.

“The ODA has been an active partner with the dental pilot projects from the beginning. We look forward to resulting data from the pilots to further inform the discussion on how best to serve Oregonians and meet their oral health needs,” wrote Jennifer Lewis-Goff, a spokeswoman for the Oregon Dental Association in an email response. “The ODA is currently participating in a series of conversations across the state with Oregon’s tribes, seeking to find comprehensive solutions to serve the oral health needs of that population.”

The Oregon Dental Association still argues there is not a shortage of dentists in the state, and Oregon actually has more dentists than the national average -- 69 per 100,000 people, versus 61 per 100,000 for the country at large. A study ODA has presented about Medicaid access was inconclusive since it only had data for dentists in the fee-for-service system, while 90 percent of Medicaid recipients are in managed care.

The American Dental Association has opposed dental health aide therapists elsewhere. Creating a new class of providers with less education could undermine their business and create a new professional interest group to fight to maintain its own position in the market, particularly if they’re brought into urban areas.

A big part of the problem with dental access for people on medical assistance is the abysmal pay that Medicaid is willing to give to dentists compared to private insurance or healthcare for public employees. Low-income patients are also more likely to have dental caries and need more serious dental work.

In Oregon, the approach has been to create dental care organizations that get paid per patient and are tasked with health management. Instead of getting paid per procedure, these organizations share risk and make money when their patients don’t need to see the dentist.

Root of the Problem

Mike Shirtcliff, the CEO of Advantage Dental, respected the tribes’ intentions, but he said the real problem with the dental health system is  this flawed funding stream, which encourages dentists to treat the symptoms, not the disease. Adding a mid-level provider won’t solve the problem in much of Oregon, where a shortage of dentists is not the issue.

In America, the traditional scheme pays dentists only when they drill a hole and fill the cavity -- they don’t get paid if they prevent the cavity from ever forming. And the tooth decay around many cavities eventually comes back. At least a fifth will eventually need a root canal or extraction, said Shirtcliff. (Disclosure: Shirtcliff is a board member for The Lund Report.)

Shirtcliff said tooth disease could be eradicated if pediatricians and pediatric dentists catch the disease in infancy and apply anti-microbials to the infection such as silver fluoride -- a practice long known to the Japanese, and which Shirtcliff and Peter Milgrom, a professor of dentistry at the University of Washington, worked to obtain Food & Drug Administration approval.

Johnson agreed that preventive work was important but said that routine access has not been there, and many Native Americans are living with severe tooth decay. “You can’t work on prevention until you get basic needs met,” she said.

She said the Alaska Native program has retained 80 percent of its dental health aide therapists since coming on line 12 years ago. The Native American Rehabilitation Association of the Northwest was able to recruit Ben Steward, a member of the Cow Creek Band of Umpqua Tribe of Indians, who had worked for several years in Alaska and will serve as an anchor for that program.

On the South Coast, the Confederated Tribes of the Coos, Lower Umpqua and Siuslaw employed the first dental health aide therapist in Oregon, Naomi Petrie, a tribal member who trained in Alaska specifically to work at the Coos’ clinic.

Four more Native Americans have pledged to work in Oregon tribal health settings after training finishes  in Alaska -- one at the Native American Rehabilitation Association and three more on the South Coast -- one more at the Coos, Lower Umpqua and Siuslaw and two with the Coquille Indian Tribe.

Correction: An earlier version of this story referred to dental pilot programs in both Oregon and Washington. Only Oregon has such a pilot. The story has been updated to correct the error.