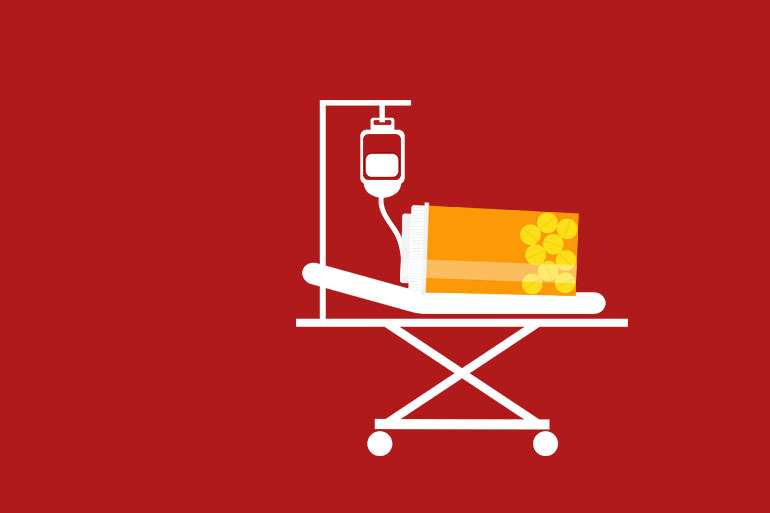 Every day, headlines detail the casualties of the nation’s surge in heroin and prescription painkiller abuse: the funerals, the broken families and the patients cycling in and out of treatment. Now, a new study sheds light on another repercussion — how this public health problem is adding to the nation’s ballooning health care costs and who’s shouldering that burden.

The research comes as policymakers grapple with how to curb the increased abuse of these drugs, known as opioids. State legislators in New York, Connecticut, Alaska and Pennsylvania have tried to take action by adding new resources to boost prevention and treatment. In addition, President Barack Obama laid out strategies last month intended to improve how the health system deals with addiction.

Published Monday in the journal Health Affairs, the study measures how many people were hospitalized between 2002 and 2012 because they were abusing heroin or prescription painkillers, and how many of them got serious infections related to their drug use. It also tracks what hospitals charged to treat those patients and how the hospitals were paid.

The findings? Hospitalizations related to use and dependence on opioids have skyrocketed, from about 302,000 in 2002 to about 520,000 a decade later. During the same time period, the number of these patients who had dangerous infections, like endocarditis or septic arthritis, increased from about 3,400 to 6,535. Those tallies are likely higher now, given the continued growth in opioid abuse, said Matthew Ronan, a hospitalist at the Veterans Health Administration in Boston, an instructor at Harvard Medical School and the study’s primary author.

Meanwhile, those same patients are becoming more expensive to treat. Hospitals charged almost $15 billion in 2012 for opioid-related inpatient care — more than double what they billed in 2002, even after accounting for inflation. More than $700 million of that went to treating patients with the associated infections. And many were uninsured or on Medicaid, the federal-state health insurance program for low-income people.

“We’re certainly seeing the bad outcomes of IV drug use, whether that’s death or hospitalization,” Ronan said. “It’s a pretty destitute population and a population that doesn’t have a lot of resources. You can only imagine that the bills are going to be huge.”

Opioid overdoses killed more than 28,000 people in 2014, the most recent year for which the Centers for Disease Control and Prevention has public data. That was an all-time high. Experts say increased availability of drugs like heroin and prescription painkillers is driving the problem.

The findings add another layer to efforts to combat addiction, said Wilson Compton, deputy director of the federal National Institute on Drug Abuse. It is already a public health matter, he said, and this research makes the case for a public cost concern, too.

Demographically, there’s a fair bit of overlap between people who are on Medicaid and those who abuse opioids, Compton noted. So it’s not surprising this program shoulders the burden of treating those patients when they get sick. But as more people become eligible for Medicaid through the federal health law that burden could easily grow, he noted.

“It’s tax dollars going to address this issue,” said Compton, who wasn’t involved with the study. “By treating it more effectively and helping prevent these cases, we might be able to save money for all of us.”

Those savings would only be a fraction of health care spending overall, Ronan noted. But being “more proactive” may help to prevent “some of those things from happening,” he added.

Plus, the findings probably underestimate just what opioid abuse costs, Ronan said. For instance, researchers didn’t take into account what it costs to look after patients once they leave the hospital, though the ones with serious infections usually need follow-up care in monitored settings such as skilled nursing facilities or through home care.

“They often require longer-term care — more involved care,” he said. “The cost in infection doesn’t end when they’re discharged. The $700 million is just the inpatient side, just the start of the cost.”

The researchers didn’t break down which hospitals are most likely to treat patients based on their opioid abuse. But both Ronan and Compton noted that heroin and prescription painkiller abuse is more common in particular areas: the Southwest, the Northeast and rural areas like Alaska and Appalachia.

Things like needle-sharing programs and promoting better hygiene might at least reduce the risk of infection, Ronan said, even if they don’t undo addiction itself.

“The reason people are engaging in high-risk abuse that is putting them at the risk for infection is the underlying opioid addiction. So better treatment, and getting people into treatment, is a key approach,” Compton said. “I don’t think this study changes that, but it reinforces the need.”