Opinion: Can CCOs Lead Us To Universal Health Care? 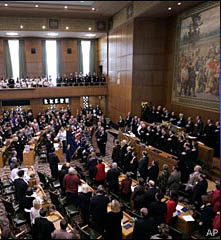 Coordinated care organizations were created by the Oregon Legislature in 2012 to better serve the Medicaid population. Coordinated care organizations in the past four years have met certain metrics for Oregon’s Medicaid population, e.g., reducing unnecessary emergency room visits. CCOs have been credited with keeping the growth of medical costs at a level acceptable to the Oregon Health Authority, though greater than the growth of Medicaid expenditures throughout the nation.

Patients enrolled in coordinated care organizations are generally happy with their care, attributable in large part to their use of recently adopted patient-centered medical homes. For years, these homes have been used across the nation as a model of health care delivery, and have been shown to improve health outcomes. However, it is too early to tell whether coordinated care organization patient-centered medical homes will achieve similar gains.  Given enough time, it is reasonable to expect individual and population health to improve through coordinated care organizations’ continued structural support of patient-centered medical homes, through improved treatment for mental health disorders and through full engagement of public health agencies in addressing social determinants of health.

To generate public trust and participation in coordinated care organizations, the 2017 Oregon Legislature adopted House Bill 4018. The Rules Advisory Committee for the bill met several times over the summer of 2018 to define policy rules. Most of the committee participants were CCO agents who seemed (to us) more intent on protecting their employers’ financial secrecy than protecting the public interest. The resulting Administrative Rules (410-141-3025), if interpreted literally, would indeed promote more public participation but could also allow CCOs to restrict public scrutiny and neglect the public interest, as did Trillium in 2015.

Another problem is the portability of access to care.  Oregonians who work or study in communities outside their coordinated care organization boundaries may have neither time nor money to travel back to their community organization for health care. Placing all coordinated care organization enrollees into a single risk pool and making coverage portable across the state regardless of organization boundaries would solve this problem. A single risk pool carries the added benefit of sharing risk over a larger population, a key concept for financial sustainability and fairness in any insurance system. Multiple risk pools require complicated risk adjustments which are costly and inevitably imprecise and lead to inequities in the delivery of care.

The ethical foundation for health care delivery in the United States has been an ongoing societal debate for over 25 years.  Now a majority of Americans support the idea that they should have guaranteed access to health care for all. Nationally, medical professionals are embracing universal health care on an equity and ethical basis. In 2009 the Oregon Academy of Family Physicians passed a resolution in support of single payer national health insurance as an effective strategy to achieve universal access. More recently the Oregon Medical Association and the Oregon Chapter of the American Academy of Obstetrics and Gynecology approved resolutions in support of universal health care. Oregon has for decades served as a national model for other states in achieving good quality health care for its Medicaid population, and coordinated care organizations now play a role in that model.

Will coordinated care organizations serve as a transition to universal health care? Perhaps they will. For the past year the Oregon Health Authority, under the leadership of Patrick Allen, has been soliciting and distilling public input for the upcoming coordinated care organization contract re-negotiation process. Your participation is needed if these organizations are to be trusted to play a central role in publicly funded universal health care for Oregon.

Dr. Michael Huntington is a retired radiation oncologist who became concerned about the U.S. health-care system while he was the medical director at Samaritan Regional Cancer Center in Corvallis. You can reach him at [email protected].

Dr. Bruce Thomson is a family physician from Corvallis. He has served as Benton County Health officer for the past 19 years. He is a member of Oregon Physicians for a National Health Program and is Chair of the Legislative Committee for Mid-Valley Health Care Advocates, both of which advocate universal health care. The opinions here are his own and do not necessarily reflect those of the organizations in which he participates. You can reach him at [email protected].