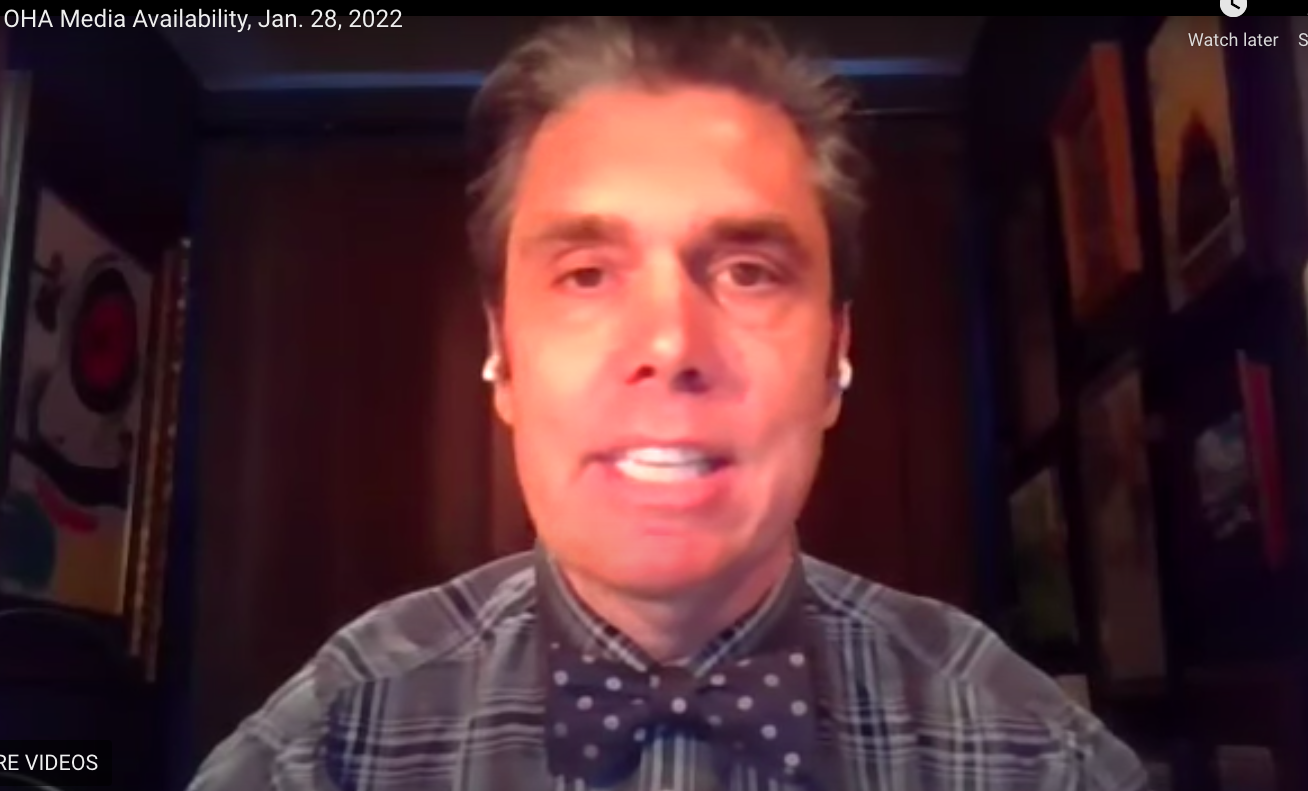 Within the next few weeks, the Oregon Health Authority expects to file permanent mask and vaccine rules that affect the public, health care workers and students and staff in schools.

Despite a barrage of opposition to the rules, Dr. Dean Sidelinger, state epidemiologist, said now was not the time to rescind them.

“We are simply not yet at a point where we can consider relaxing these crucial protections,” Sidelinger said during an online news conference Friday. That message was also shared earlier this month by Patrick Allen, director of the Oregon Health Authority, who is recovering at home from a serious fall on Sunday. Sidelinger wished Allen a speedy recovery.

Between August and November, the health authority adopted five temporary rules requiring masks in indoor settings and mandating vaccinations and masks in schools and health care facilities. Temporary rules cannot extend past six months. But then the highly infectious omicron variant hit, causing surging demand for hospital beds that is far from over.

The demand for hospitalizations is highest in the Portland area, home to some of the state’s largest hospital systems, which was the first to see skyrocketing cases. From the Portland area to the coast and south through Benton, Lincoln and Linn, Polk, less than 2% of regular adult beds are free, according to Oregon Health Authority data.

An analysis through the Oregon Association of Hospitals and Health Systems, which includes suspected COVID-19 cases, shows that 1,190 people were hospitalized Friday. They include nearly 70 more admissions on Thursday.

Hospitals outside northwest Oregon, with the exception of Gilliam, Hood River, Sherman and Wasco counties, appear to have a fair number of regular and intensive care beds free. About 1,000 temporary health care workers are helping hospitals around the state, Sidelinger said, along with 1,200 National Guard members, who are due to be fully deployed by Monday.

The current surge is expected to impact life in Oregon for weeks.

“Even if cases have leveled, it will take several weeks for hospitalizations to peak and then return down to levels that are not stressing our hospital systems,” Sidelinger said.

A forecast released late Friday by Peter Graven of Oregon Health & Science University predicts that hospitalizations could peak in just over a week at 1,220 cases. That’s just over the peak of the delta surge this summer. Though a few hospitals ran out of beds for a day or two, none had to ration care.

Graven has scaled down his weekly forecasts in recents weeks based on behavior: More Oregonians are donning masks in public places and avoiding large indoor gatherings.

“We have flattened the curve a lot,” https://news.ohsu.edu/2022/01/28/jan-28-forecast-indicates-oregon-covid-...Graven said in a statement. “It’s really important for people to stick with it for another week.”

Another bit of good news: There are no new worrying variants on the horizon, Sidelinger said. A variation of the current omicron strain is sickening people in Denmark, India, South Africa and the Philippines and is also in the United States, with at least two cases in Washington state, but scientists said they doubt it will stymie the current vaccinations.

Sidelinger thanked people who’ve been vaccinated and boosted and urged more to follow suit. Though the state is far from Gov. Kate Brown’s goal of boosting 1 million more people by Monday, falling about a half a million short, Sidelinger stressed that Oregon is among the top 10 states nationwide in overall vaccination rates and the percentage of adults who’ve received boosters. Just over 40% of adults have been boosted, state data show, and nearly 75% have received either two shots of the Pfizer or Moderna vaccines or one shot of Johnson & Johnson.

Sidelinger said a vaccine for children younger than 5 is likely to be on the market by the end of the year. Children have been harder hit by omicron than delta, with nearly 20% infected. Pediatric cases started to surge in December.

Providers still lack treatment options. Antivirals against omicron remain in short supply, along with infusions of monoclonal antibodies, which are made in the lab to resemble those created by our immune system. An increase in supplies could help Oregon move to a situation where the virus does not have such a big impact on people’s lives, hospitals and businesses, which have grappled with sick workers.

Sidelinger said he expects cases to drop rapidly after the peak, declining for several weeks.

When the crisis abates, Sidelinger said the state would stop requiring masks and just recommend them. That time could come soon, he indicated.

“I hope we can enjoy a spring and a summer where it is more normal,” Sidelinger said. In the meantime: “We could have a few very bad days in front of us,” he said.