OHSU is also considering whether to arm public safety officers to improve safety on campus following the shooting at Virginia Polytechnic Institute.
By:
Christen McCurdy 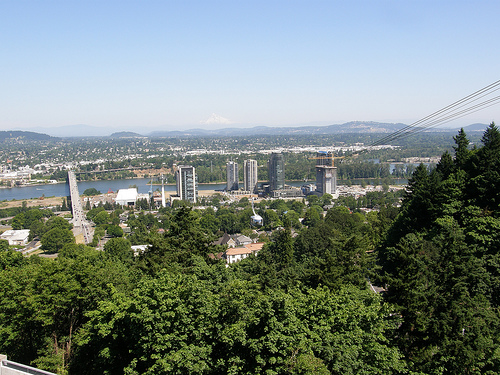 September 16, 2013 – Oregon Health & Sciences University reported above-budget revenues and discussed the possible use of armed offices on campus at this week's board of directors meeting.

Chief financial officer Lawrence Furnstahl reported an operating income of $96 million so far in fiscal year 2013, which is $36 million over budget and 15 percent over results from the previous fiscal year.

Furnstahl said the institution's immediate financial strategy will include “continued belt-tightening” and discussions with faculty about how to make sure their efforts are appropriately rewarded.

“We are a people business,” Furnstahl said, noting that the majority of the school's of operating expenses go to salaries, while the bulk of revenue comes from patient admissions.

“I realize you haven't given a negative report as long as I've been on the board,” said board chair Charles Wilhoite.

Following the financial presentation, Greg Moawad, director of public safety at OHSU, and provost Janet Mladenovic talked about his department's plan for improved safety on campus, including the possibility of arming public safety officers, which the public safety workgroup – a group convened to discuss safety measures on campus in 2008 – will vote on next year.

Oregon campuses were authorized to arm public safety officers in 2009 after the Legislature passed Senate Bill 658 in response to 2007's shooting at Virginia Polytechnic Institute, during which 32 students and faculty were killed and 17 were injured. Last summer at OHSU, Moawad said, there was a threatened shooting on campus and it took Portland Police Bureau officers 12 minutes to arrive on the scene.

Moawad said many people on the commission were reluctant to embrace the idea of arming officers, but changed their minds after the public safety department's intended approach was spelled out for them -- which he said will emphasize training in de-escalation techniques.

“The concern has been specifically around the incidents where normally trained police forces have not been sufficiently trained and had enough tools to deal with de-escalation to deal with stressed and mentally ill people,” said board member David Yaden, adding that he agreed that heavy emphasis on appropriate training is key. “I'm really commending you for that emphasis and think that's got to be part of the emphasis.”

The board's final presentation came from Steve Shea, director of the newly renamed Oregon Institute of Occupational Health Sciences, which was previously called the Center for Occupational and Environmental Toxicology but will officially assume a new name Jan.1 as the result of a decision by the Legislature.

The office conducts basic and applied research on occupational health, including how major workers' compensation claims can be prevented, and the name change came about because just 2 percent of workers' compensation claims are related to chemical exposures, where nearly half of claims relate to back injuries, Shea said. Current research projects focus on the safety of home care and corrections workers, as well as the effects of disrupted sleep patterns from shift work (that is, graveyard or swing shifts that force people to sleep during the day).

During his remarks near the beginning of the meeting, Dr. Joe Robertson, OHSU president, talked about a candidate for an HIV vaccine that is Dr. Louis Picker's most successful attempt yet, and was written up in the journal Nature last week. “The candidate has successfully cleared the virus from 50 percent of the monkeys that have received the vaccine,” Robertson said. “We hope that human trials will only be a few years away.”

He also made mentioned a $25 million gift from a joint philanthropic partnership between Norman and Linda Brenden and the Colson Family Foundation, earmarked for pancreatic cancer research. “It's been a great year for philanthropy,” Robertson said, noting that when the OHSU Foundation's books were closed at the end of the year, it had raised $197 million, making fiscal year 2012 a record year for the institution, with money coming in from all 50 states and 11 countries.

At the meeting's conclusion, the board also voted unanimously to approve the appointment of OHSU attorney Janet Billups as its secretary, anticipating the departure of board secretary Amy Wayson.

Image for this story by Carol Munro (CC BY-NC 2.0) via Flickr.