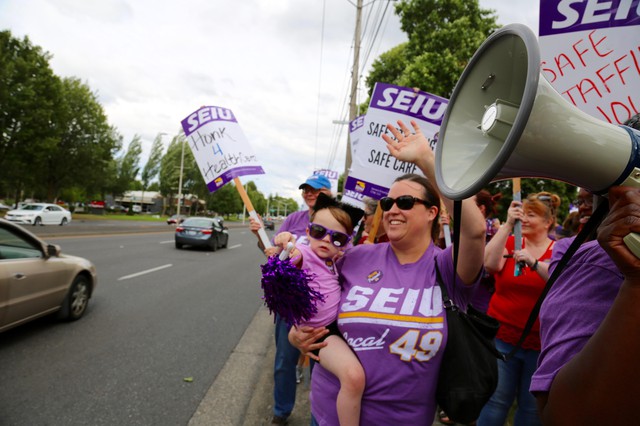 “I’m fighting for my pension, my pay raises, my time off,” said Lisa Pharmeter, a dental assistant at the Cascade Park campus and one of more than 50 Service Employees International Union Local 49 members who protested in east Vancouver Tuesday. “We take care of the patients, and it’s super important for us to be compensated for that in a reasonable manner.”

SEIU’s local contract with Kaiser expired on June 30, but was extended through the end of July. If an agreement isn’t met, union members say they’re prepared to vote on a strike.

“Kaiser has yet to be willing to agree to terms of a new national agreement or terms that our members feel like address what people are most concerned about,” said SEIU Local 49 president Meg Niemi.

Niemi said the union wants to restore a “true equal partnership” with Kaiser, one in which members feel like they have a voice in their jobs.

“Our members have really made Kaiser very successful over the last 20 years,” Niemi said. “We want to make sure that if we’re engaging in that labor-management partnership, it’s not lopsided towards management, that it’s an equal partnership.”

Labor unions claim management are offering pay increases below the area’s cost of living rate, eliminating pensions for new employees, and have made staffing cuts that are impacting their ability to provide high-quality customer care.

“That is suffering now due to short staffing,” said Cliff Pfenning, a patient registration representative at Cascade Park who has worked with Kaiser for 18 years. He is also on the SEIU Local 49 executive board. “We are concerned that our patients won’t get the same quality care.”

“Kaiser Permanente continues to strongly believe in the tremendous value of our long-standing and highly successful partnership … ” the health care provider wrote in a statement. “We look forward to reaching a fair and equitable agreement in the near future.”

The SEIU bargaining team left negotiations with Kaiser on July 12 and told members in the Pacific Northwest to be ready for a potential strike. Strike authorization votes will begin Aug. 6 and end by Aug. 23.