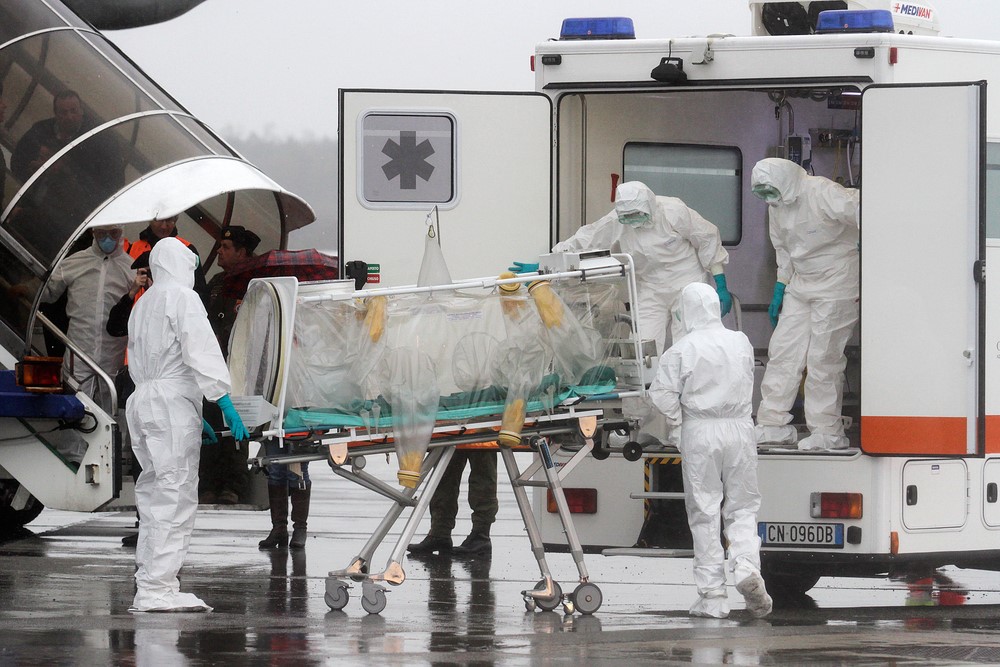 Ebola is one of the deadliest diseases in the world./Shutterstock

Four of the people are in Oregon and 23 are in Washington state. They all recently visited Guinea and Democratic Republic of the Congo, which have Ebola outbreaks in certain regions. They're being asked to self-quarantine and check their temperature for 21 days and report any symptoms, such as a fever.

The Centers for Disease Control and Prevention, which is tracking travelers to those countries, alerted health officials in both states about their status.

Public health agencies in Oregon and Washington have been in touch with the travelers since returned to the U.S. earlier this month. They're considered “persons under monitoring, which that public health officials talk to them daily. The goal is to ensure they're quarantined and to get them to a hospital if they develop any symptoms to prevent the disease from spreading to their families or the community.

“We want to make sure these individuals have the support they need to monitor their health, stay in contact with public health officials and safely get help with medical services if it comes to that,” said Dr. Richard Leman, chief medical officer for health security, preparedness and response at the authority’s Public Health Division.

Officials declined to release the counties, ages or circumstances related to the people they are monitoring. Leman said the four people who returned to Oregon had traveled in different parties -- not as one group -- but he declined to elaborate on their circumstances such as whether they were volunteers with a relief organization, missionaries or entered the U.S. to become residents.

In a call with reporters, Leman said the people are asymptomatic and that Ebola cannot spread unless a person develops symptoms. That means that threat to the community is minimal, Leman said. He said the state released the information about monitoring them to be as transparent as possible.

“It’s important that people understand that the risk is very low,” Leman said. “This is not a big deal, and public health is basically taking steps to keep it that way to make sure it stays not a big deal.”

The outbreaks are in small parts of each nation and not in large urban centers. Guinea reported 18 Ebola cases and nine Ebola-related deaths as of Wednesday. The Guinea outbreak is centered in Nzérékoré Prefecture, located in the country’s southern region near the Liberian border. Democratic Republic of the Congo has reported 12 Ebola cases and six Ebola-related deaths. That nation’s outbreak is in North Kivu Province, which is in the eastern part of the country near the Ugandan border.

The CDC has issued Level 3 travel warnings for the affected regions in both countries, recommending that people avoid non-essential travel there.

Starting March 4, the CDC required all airlines to supply contact information for U.S.-bound travelers who were in Guinea or Democratic Republic of the Congo in the last 21 days — the longest known incubation period for Ebola. Those travelers bound for the United States go through six international airports: Dulles in Washington, D.C.; John F. Kennedy in Queens, New York; Newark Liberty in Newark, New Jersey; O’Hare in Chicago, Illinois; Hartsfield-Jackson in Atlanta, Georgia; and LAX in Los Angeles, California. Once there, officials interview them to determine if they have symptoms and offer a medical evaluation if they do.

Symptoms include fever, aches and pains, fatigue, abdominal pain, diarrhea and vomiting and unexplained bleeding or bruising. Symptoms can emerge two to 21 days after exposure, with an average of eight to 10 days, according to the CDC. Ebola is one of the deadliest infectious diseases in the world, killing about 50% of patients.

Ebola was discovered in 1976 during outbreaks in what is now South Sudan and the Democratic Republic of Congo. The 2014-2016 Ebola outbreak in West Africa started in rural southeastern Guinea before jumping to urban areas and becoming a global epidemic, according to the CDC.

In 2019, the Food and Drug Administration approved a vaccine against one of the most prevalent strains of the virus. It was developed by the same team behind the Johnson & Johnson vaccine against COVID-19 and uses the same technology. Both vaccines use one shot.

Ebola spreads differently from COVID-19. People contract Ebola through exposure to blood or other bodily fluids of someone who is ill, which requires closer contact than with someone who has COVID-19. COVID-19 spreads through respiratory droplets when an infected person coughs, sneezes or even breathes.

“Ebola’s just a lot tougher to get,” Leman said. “It’s a nasty disease. You don't want to get it, but it’s a lot less contagious.”

The CDC shares information with state public health officials for travelers whose itineraries include Oregon or any other state. That allows public health agencies to follow up with the travelers and educate them about symptoms to watch for and how to get prompt medical care if they fall ill.

State and local public health officials also are contacting international non-governmental organizations that serve the impacted nations to request early notification of any volunteers who travel to Oregon after working in those areas.

The last time Oregon had an Ebola scare was in late 2014 when a Liberian woman was visiting her family in Portland. She was monitoring herself for symptoms, taking her temperature twice a day, when she developed a fever and was whisked to Providence Milwaukie Hospital which had been established by Providence as an Ebola training center and was staffed for treating an infected patient.

She was kept in isolation and treated by providers who wore protective gear, much like they do today when caring for a COVID-19 patient.

Her family was quarantined in their home. In the end, it turned out to be a false alarm. She didn’t have the disease.