The group needs to purchase lab equipment before it can start processing donations locally
By:
Christen McCurdy 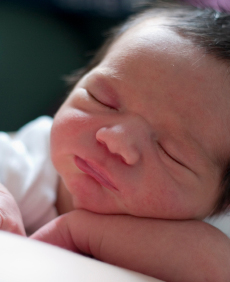 November 22, 2011 -- The Northwest Mothers Milk Bank is halfway toward its fundraising goal of $400,000 – the amount the organization needs to open a physical location to process donations.

The bump is thanks to a $125,000 donation from Oregon Health Insurers Partnering for Prevention (OHIPP), a group of health insurers convened by the Oregon Public Health Institute.

Dr. Helen Bellanca was working for OHPI and helped coordinate the cash donation. A family physician and the mother of a 19-month-old child, she later ended up donating 180 ounces of her own milk to a milk bank – which was then shipped to San Jose to be processed.

“It was just intuitive,” Bellanca said, adding that by the time her daughter reached her first birthday, her need for milk had decreased, and there was a surplus of milk in the freezer. She went through a phone interview, and then was screened by a doctor (who drew blood and certified that both Bellanca and her child were in good health). Then she was sent a cooler, and Federal Express picked up the donation from her house.

“It was actually really easy to donate milk,” Bellanca said.

Milk bank board chair June Winfield said the milk bank is still trying to raise funds to get a physical processing site up and running – mostly to purchase lab equipment so milk can be pasteurized, batched and tested before being distributed.

“There's really a need for a milk bank in every state,” Winfield said. Last year, 1.8 million ounces of pasteurized donor milk were distributed – but the demand has been estimated at 8 million ounces or more.

Winfield also said 40,000 ounces of milk were shipped from Oregon to be processed out of state – and that several Oregon hospitals distribute donor milk to babies in neo-natal intensive care units (mostly to premature babies), or to at or near-term babies to whom mother's milk is not available.

OHPI decided to focus on breastfeeding as prevention partly because of the large body of research suggesting breastfed babies have a lower risk of many health conditions later in life, but also because of what donor milk can do for premature babies, Bellanca said.

Premature babies are at high risk of developing necrotizing enterocolitis (NEC), a condition where the bowel tissues die and which can lengthen the stay in the neo-intensive care unit, Bellanca said. Research indicates that between 75 and 85 percent of those cases can be prevented by exclusively using human milk.

After she donated to the milk bank, Bellanca heard about someone who was unable to breastfeed. But, because she had a healthy baby born at term, she was ineligible for donor milk. Bellanca ended up giving her 40 ounces of her own milk.

“I did it because she didn't have any other option” other than formula, she said. The recipient felt safe because Bellanca had already been screened by the milk bank, which requires blood screening. With the enormous underground market of human milk sharing, she cautions mothers to undergo the same screening.