By:
Arthur Allen and Liz Szabo 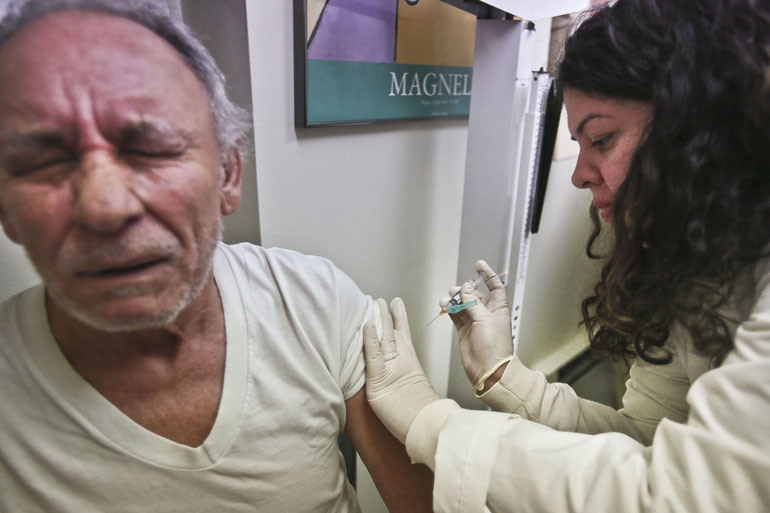 The Food and Drug Administration is weighing whether to follow British regulators in resuming a coronavirus vaccine trial that was halted when a participant suffered spinal cord damage, even as the National Institutes of Health has launched an investigation of the case.

“The highest levels of NIH are very concerned,” said Dr. Avindra Nath, intramural clinical director and a leader of viral research at the National Institute for Neurological Disorders and Stroke, an NIH division. “Everyone’s hopes are on a vaccine, and if you have a major complication the whole thing could get derailed.”

A great deal of uncertainty remains about what happened to the unnamed patient, to the frustration of those avidly following the progress of vaccine testing. AstraZeneca, which is running the global trial of the vaccine it produced with Oxford University, said the trial volunteer recovered from a severe inflammation of the spinal cord and is no longer hospitalized.

AstraZeneca has not confirmed that the patient was afflicted with transverse myelitis, but Nath and another neurologist said they understood this to be the case. Transverse myelitis produces a set of symptoms involving inflammation along the spinal cord that can cause pain, muscle weakness and paralysis. Britain’s regulatory body, the Medicines and Healthcare Products Regulatory Agency, reviewed the case and has allowed the trial to resume in the United Kingdom.

AstraZeneca “need[s] to be more forthcoming with a potential complication of a vaccine which will eventually be given to millions of people,” said Nath. “We would like to see how we can help, but the lack of information makes it difficult to do so.”

Any decision about whether to continue the trial is complex because it’s difficult to assess the cause of a rare injury that occurs during a vaccine trial — and because scientists and authorities have to weigh the risk of uncommon side effects against a vaccine that might curb the pandemic.

“So many factors go into these decisions,” Nath said. “I’m sure everything is on the table. The last thing you want to do is hurt healthy people.”

The NIH has yet to get tissue or blood samples from the British patient, and its investigation is “in the planning stages,” Nath said. U.S. scientists could look at samples from other vaccinated patients to see whether any of the antibodies they generated in response to the coronavirus also attack brain or spinal cord tissue.

Such studies might take a month or two, he said. The FDA declined to comment on how long it would take before it decides whether to move forward.

Dr. Jesse Goodman, a Georgetown University professor and physician who was chief scientist and lead vaccine regulator at the FDA during the Obama administration, said the agency will review the data and possibly consult with British regulators before allowing resumption of the U.S. study, which had just begun when the injury was reported. Two other coronavirus vaccines are also in late-stage trials in the U.S.

If it determines the injury in the British trial was caused by the vaccine, the FDA could pause the trial. If it allows it to resume, regulators and scientists surely will be on the watch for similar symptoms in other trial participants.

A volunteer in an earlier phase of the AstraZeneca trial experienced a similar side effect, but investigators discovered she had multiple sclerosis that was unrelated to the vaccination, according to Dr. Elliot Frohman, director of the Multiple Sclerosis & Neuroimmunology Center at the University of Texas.

Neurologists who study illnesses like transverse myelitis say they are rare — occurring at a rate of perhaps 1 in 250,000 people — and strike most often as a result of the body’s immune response to a virus. Less frequently, such episodes have also been linked to vaccines.

The precise cause of the disease is key to the decision by authorities whether to resume the trial. Sometimes an underlying medical condition is “unmasked” by a person’s immune response to the vaccine, leading to illness, as happened with the MS patient. In that case, the trial might be continued without fear, because the illness was not specific to the vaccine.

More worrisome is a phenomenon called “molecular mimicry.” In such cases, some small piece of the vaccine may be similar to tissue in the brain or spinal cord, resulting in an immune attack on that tissue in response to a vaccine component. Should that be the case, another occurrence of transverse myelitis would be likely if the trial resumed, said Dr. William Schaffner, an infectious disease specialist at the Vanderbilt University School of Medicine. A second case would shut down the trial, he said.

In 1976, a massive swine flu vaccination program was halted when doctors began diagnosing a similar disorder, Guillain-Barré syndrome, in people who received the vaccine. At the time no one knew how common GBS was, so it was difficult to tell whether the episodes were related to the vaccine.

Eventually, scientists found that the vaccine increased the risk of the disorder by an additional one case among every 100,000 vaccinated patients. Typical seasonal flu vaccination raises the risk of GBS in about one additional case in every 1 million people.

“It’s very, very hard” to determine if one rare event was caused by a vaccine, Schaffner said. “How do you attribute an increased risk for something that occurs in one in a million people?”

Before allowing U.S. trials to restart, the FDA will want to see why the company and an independent data and safety monitoring board (DSMB) in the U.K. felt it was safe to continue, Goodman said. The AstraZeneca trial in the United States has a separate safety board.

FDA officials will need to review full details of the case and may request more information about the affected study volunteer before deciding whether to allow the U.S. trial to continue, Goodman said. They may also require AstraZeneca to update the safety information it provides to study participants.

It’s possible that the volunteer’s health problem was a coincidence unrelated to the vaccine, said Dr. Amesh Adalja, a senior scholar at the Johns Hopkins Center for Health Security. Studies aren’t usually stopped over a single health problem, even if it’s serious.

Yet many health leaders have expressed frustration that AstraZeneca hasn’t released more information about the health problem that led it to halt its U.K. trial.

“There is just so little information about this that it’s impossible to understand what the diagnosis was or why the DSMB and sponsor were reassured” that it was safe to continue, Goodman said.

AstraZeneca has said it’s unable to provide more information about the health problem, saying this would violate patient privacy, although it didn’t say how.

But there’s an exceptional need for transparency in a political climate rife with vaccine hesitancy and mistrust of the Trump administration’s handling of the COVID-19 response, leading scientists say.

“While I respect the critical need for patient confidentiality, I think it would be really helpful to know what their assessment of these issues was,” Goodman said. “What was the diagnosis? If there wasn’t a clear diagnosis, what is it that led them to feel the trial could be restarted? There is so much interest and potential concern about a COVID-19 vaccine that the more information that can be provided, the more reassuring that would be.”

The FDA will need to balance any possible risks from an experimental vaccine with the danger posed by COVID-19, which has killed nearly 200,000 Americans.

“There are also potential consequences if you stop a study,” Goodman said.

“This is part of the idea of not having just one vaccine candidate going forward,” he said. “It gives you a little more insurance.”

“The investigators have inadvisedly been hyping their own vaccine,” Schaffner said. “The Oxford investigators were out there this summer saying, ‘We’re going to get there first.’ But this is exactly the sort of reason … Dr. [Anthony] Fauci and the rest of us have been saying, ‘You never know what will happen once you get into large-scale human trials.’”