New Week: New Round Of COVID-19 Vaccinations In Oregon 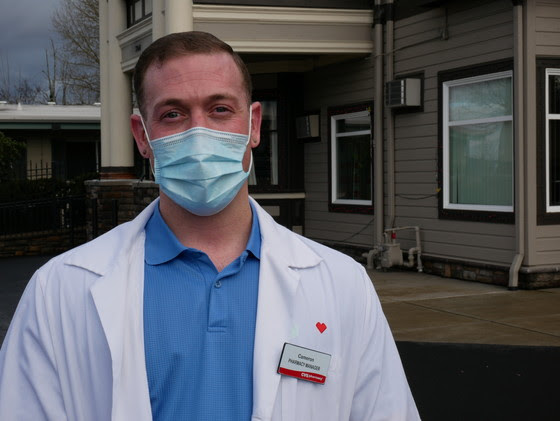 Three pharmacy companies set up clinics in skilled nursing homes in Oregon on Monday, marking the start of a months-long drive to vaccinate staff and residents of long-term care facilities against the novel coronavirus.

The federal Centers for Disease Control and Prevention has designated long-term care residents and staff in the first group of those to be vaccinated, along with frontline health care workers, who began receiving injections last week. Federal authorities contracted with CVS, headquartered in Rhode Island, and Illinois-based Walgreens to carry out the campaign nationwide. Local pharmacies also won federal vaccination contracts, with most states having three companies in charge. In Oregon, the third company is Consonus Pharmacy Services, which is based in Portland.

Oregon’s more than 680 nursing homes and assisted living, memory care and residential care facilities were divided among the three companies, along with more than 1,580 adult foster homes that house five or fewer residents, and other care facilities. In all, they’re home to about 34,200 people.

But everyone can’t be vaccinated at once. First up: skilled nursing facilities.

Their residents are among the most vulnerable to severe complications and death stemming from COVID-19. Anyone living in close quarters with others is at risk of catching the virus, which is highly infectious. It just takes 15 minutes of exposure to become infected by the virus which spreads through droplets and aerosolized particles.

If a staff member gets infected in the community and fails to wear a mask at work, for example, or uses one with a poor fit, the virus can spread to residents. Infected residents can also spread the virus to other residents and to staff, which is why the state has put facilities with ongoing outbreaks into lockdowns.

Some outbreaks have raced through facilities.

More than 940 nursing home residents have been infected with the virus in Oregon, according to the federal Centers for Medicare and Medicaid Services. A total of 165 have died among a total of 1,347 COVID-19 deaths in the state.

“It is one of the great tragedies of this pandemic that COVID-19 has been most deadly for our seniors living in long-term care,” Gov. Kate Brown said in a statement.. “Even our most stringent policies have not been able to change that fact.”

The deaths in nursing homes include two fatalities at Windsor Health & Rehab in Salem, where Walgreens set up a clinic on Monday. CMS data show that the facility has had 35 cases of COVID-19 since the pandemic began.

The 60-bed facility, which had 35 residents as of earlier this month, is no longer under a lockdown, following an outbreak that sickened more than two dozen people. But two other facilities where clinics took place on Monday were. CVS set up a clinic at Village Manor in Wood Village east of Portland, which is currently restricting admission because of infected staff; and Consonus held a clinic at Marquis Newberg, where an ongoing outbreak among residents and staff has forced a lockdown. No one has died at either facility, CMS data show.

“We are full of hope that this vaccination program will reduce the suffering and hardship experienced by long-term care residents, staff and their families,” Fariborz Pakseresht, director of the Oregon Department of Human Services, said in a release. “While we are pleased with the speed at which the vaccination program is rolling out, it will take some time to reach all facilities. In the meantime, we must remain vigilant and continue strict infection control policies and practices.”

The clinics on Monday followed the vaccination of nearly 4,475 health care workers last week, according to the Oregon Health Authority.

The state received more than 35,000 doses of the vaccine by Pfizer-BioNTech, and it is expecting more than 25,000 doses this week.

The Moderna vaccine, which was approved by the Food and Drug Administration on Friday, was shipped out on Monday. The state expects to receive 97,100 doses of the Moderna by the end of the month, according to Oregon Health Authority Director Patrick Allen. The vaccine poses few issues for the pharmacies. It only needs to be stored in a freezer. The Pfizer-BioNTech vaccine has to be kept at minus 70 Celsius -- colder than an Arctic winter. The state expects to receive more than 92,600 doses by the end of the month, Allen said. It's being shipped in dry ice to maintain the proper temperature. If the cold chain is broken, the vaccine has to be thrown out.

Handling the vaccine is just one of the many issues that the pharmacies have had to sort out. They also have to get residents or their guardians and staff to sign consent forms. and then work with injured or sick residents who’ve been isolated from their families. That includes dementia patients who are in memory care units in nursing homes.

In October, federal authorities asked care facilities across the country to sign up for a vaccination clinic and indicate a preferred provider. CVS said it is responsible for 450 long-term care facilities in Oregon -- about 66% of the total.

CVS said it expects to complete the two-dose vaccination campaign in 12 weeks.

Walgreens did not say how many Oregon facilities it is working with. In an email, a spokesman said the company has prepared its facilities by holding webinars, providing educational materials and assigning a local contact to help with logistics.

Walgreens plans three clinics in each facility, 21 and 28 days apart. The Pfizer-BioNTech vaccine requires a second dose three weeks after the first, and the Moderna vaccine, which was approved on Friday, requires 28 days between the doses.

A Consonus statement said the company plans to hold three different clinics at each facility this month and in January.

Oregon’s long-term care association has helped with some of the organization.

“We were thrilled that the CDC and the feds made the recommendation that long-term care should be in the first wave of vaccinations,” said Kirschbaum, of the long-term care association. “We’re hopeful that we can get as many people vaccinated by early spring. That will help us move toward getting back to normal.”

Normal is likely many months or even a year away.

When the long-term care campaign is completed, people over 75 and essential workers will have their turn, followed by younger seniors and more essential workers. The general population will be last.

It’s unclear how many people will opt for a vaccine. About 70% of residents need to be vaccinated for the community to be protected by so-called herd immunity, when enough people are immunized to thwart the spread of the virus.

Though scientists and state and federal officials say the vaccines are safe, many people are wary of the quick rollout. Normally, vaccine development takes years. But the pharmaceutical companies got an early start with the publication in December of the genetic code of the novel coronavirus. The Moderna and Pfizer-BioNTech vaccines are both based on messenger RNA, or mRNA, molecules that were manufactured by a lab and are designed to teach the immune system to attack the virus if the person becomes infected. An mRNA vaccine has never before been approved by the FDA, though some scientists claim they’re the wave of the future because they’re relatively quick to make. Manufacturers don’t have to grow the virus in an egg like they do for the flu vaccine, for example.

But there are no long-term studies on them. It's unclear whether the Oregon Health Authority is tracking each dose through a registry, for example. The Lund Report requested that information eight days ago and so far the health authority hasn't responded. It's also unclear whether state health officials are tracking side effects. A few people have suffered severe allergic reactions to the Pfizer-BioNTech vaccine.

Two other COVID-19 vaccines in the pipeline -- by Johnson & Johnson and AstraZeneca -- use different techniques.