March 5, 2012 -- Health experts often say that an ounce of prevention is worth a pound of cure; could the same be said of pollution?

That seems to be the thinking behind revisions of environmental toxic standards underway throughout the Northwest. These revisions include broad policy approaches, like a toxics reduction strategy currently out for public comment in Oregon, and more targeted initiatives, such as standards adopted late last year that make the state a model when it comes to water quality and human health.

“The absolute only way we're going to get toxics out of the environment is to prevent toxics from going into the environment,” Mary Lou Soscia said at last month's Northwest Environmental Health Conference. Soscia is the Columbia River Coordinator for the Environmental Protection Agency. Among her responsibilities: brokering arrangements between a host of stakeholders to manage water quality in the vast Columbia River basin.

At the recent conference, which focused heavily on the relationship between the diets of people in the Northwest and toxic chemical exposures, that meant discussing ongoing work to revise figures measuring fish consumption rates in the region. Such figures are crucial for managing chemical releases into watersheds that drain into the Columbia.

Fish can contain contaminants like mercury, dioxins and polychlorinated biphenyls, or PCBs, so if officials know how much fish the average person eats, they can set a baseline estimate for the type of toxins to which they're exposed. In turn, these numbers are used in formulas that establish how many toxics will be allowed to be discharged under a national pollution discharge elimination system permit. 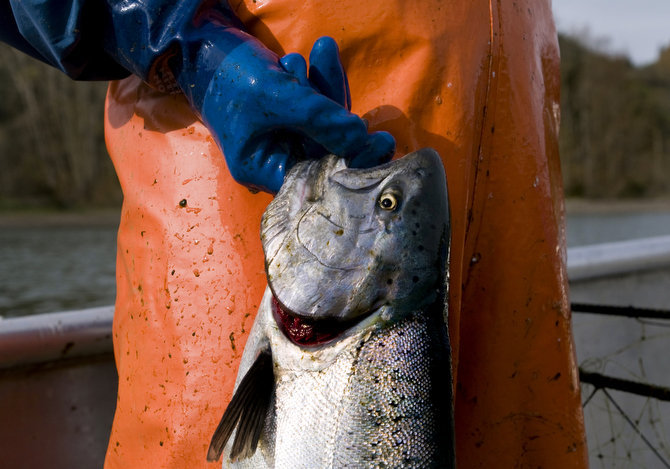 The rules are complex. Under the Clean Water Act, water quality standards are set on a state by state basis, so they differ widely between Oregon, Washington and Idaho, all states that impact the Columbia watershed. Meanwhile, there are significant political implications involved with setting fish consumption rates. Set them too high and industry will complain that they'd be forced out of business by discharge restrictions. Set them too low, and officials risk ignoring the reality of how much fish people eat.

That's a significant concern when it comes to the Northwest's Native American tribes. Native Americans in the region consume nine to twelve times more fish than the United States average. Even though people who consume more fish are at a greater risk for a host of diseases related to 113 toxic pollutants that can be found in the Columbia River Basin, Soscia said it's not effective to just tell tribes not to avoid a historic part of their diet.

In 2004, Oregon adopted a revised fish consumption rate of 17.5 grams per day — that's more than double Washington's rate, but still represented the equivalent of just one eight-ounce fish meal per month. After the Umatilla Tribe complained that the figure wasn't realistic, a collaborative process was launched between the tribe, the EPA and the Oregon Department of Environmental Quality (DEQ). Late last year, the parties came together to agree upon a rate of 175 grams per day. That's ten times Oregon's original rate, and what Soscia called “the most protective Clean Water Act state human health criteria in the United States.”

In a later interview, Soscia acknowledged that some dischargers are concerned about the financial impacts of these higher numbers because they'll have to take more measures to ensure they don't release too many pollutants. She said that in her 27 year career at EPA concerns about economic costs run high, but coming into compliance often ends up costing much less than those estimates, and can even bring economic benefits over time.

“There are some social economic benefits,” Soscia said. These include reduced healthcare expenditures in impacted communities and more opportunities for subsistence fishers.

Toxic exposures don't just occur from fish consumption or even direct discharges into the Columbia River Basin. In addition to chemicals released by industry and power plants directly into the watershed, pollutants of concern also come from other sources, such as agricultural and storm water runoff, as well as from items we use in everyday life like personal care products. That's why Oregon drafted a toxics reduction strategy in December 2011. Currently out for public comment, the strategy will be sent back to the state's Environmental Quality Commission this summer to be finalized.

The strategy attempts to integrate plans to reduce toxic chemicals in the state's environment. The idea is to identify chemicals of concern while also finding ways to streamline the various and sometimes redundant state and local efforts to reduce those chemicals' presence.

“It's more about collaborative opportunities that we see to reduce these toxics, and try to get the most bang for the buck,” says Kevin Masterson, who's coordinating the toxics reduction strategy for the DEQ.

Masterson also spoke at the same conference as Soscia. He said in addition to collaboration between different government agencies and jurisdictions, DEQ is also exploring ways to partner with businesses, growers, tribes and other stakeholders in the state's environment.

“We're hearing general support for the idea of increasing collaboration, recognizing that it's a more efficient way to get things done,” Masterson says.

The strategy, he says, could help prevent those chemicals now so prevalent in fish populations — and elsewhere — from ever entering the watershed.

“There are several actions in this strategy that will make a connection to these water quality standard goals,” he says. In public comments some people are telling DEQ that the strategy is too narrowly focused, while others say it tries to do too much with limited resources.

“Our response is initially that we do understand there are some things we can do right now with the resources that we have with these partners that are practical and implementable, and others that are further out,” he says. “We want to go through this public input phase before we go too far down the road.”

Stakeholders and members of the public interested in water quality in the Columbia River Basin will meet in Walla Walla, Wash. on April 10 for discussions between farmers, wineries and others about ways to limit toxic discharges in river and to highlight some of the work that's been done on fish consumption.

Image for this photo appears courtesy of The Oregonian.