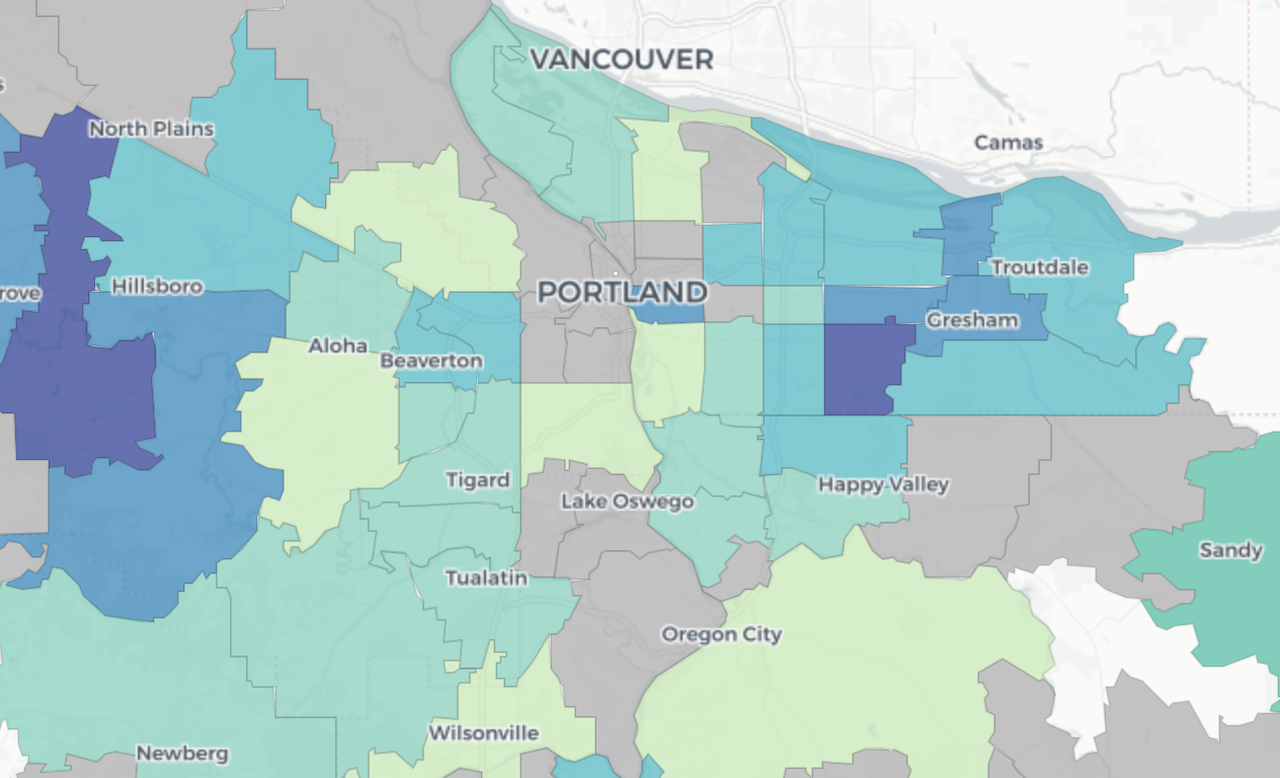 Coronavirus infections in the metro area have largely spared Portland’s close-in neighborhoods and its most exclusive suburban enclaves, flourishing instead among people who live in far-flung suburbs and exploding in the Woodburn area of Marion County.

New data released Tuesday by the Oregon Health Authority reveal for the first time the neighborhoods across the state where residents infected with the virus live. (Click here for an interactive map).

The ZIP code-level statistics show that roughly two-thirds of all infections in Multnomah County identified through Sunday are among residents living in neighborhoods east of 82nd Avenue, including one hotspot featuring two large outbreaks at nursing homes.

Nearly half of the infections in Washington County, meanwhile, are in western suburbs such as Aloha, Hillsboro, Forest Grove and Cornelius.

And in Clackamas County, affluent suburbs such as Lake Oswego and West Linn have reported so few infections that the state declined to provide specific tallies.

The ZIP code numbers account for roughly 85 percent of the 2,742 infections identified statewide through Sunday night. Health officials chose not to provide specific figures for areas with nine or fewer infections.

Release of the data – nearly 10 weeks since Oregon’s first infection – marks a new level of transparency by the state government, but it has concerned some local health officials who worry that disclosure could perpetuate bigotry or violence.

Certain neighborhoods where people with infections live are home to higher rates of people of color or households with lower income levels.

The Oregon Health Authority did not make anyone available to discuss the new numbers. But in a message announcing the public release of the data, a top state official said the goal of disclosure is to help the public “better understand the extent of community-based spread of the virus.”

“We are committed to being transparent and accountable to all the communities we serve, especially those hardest hit by the pandemic,” wrote Lillian Shirley, the authority’s public health director. “We know from earlier analysis that communities of color in Oregon have been disproportionately impacted by the virus. OHA wants to acknowledge the degree to which data, particularly by ZIP code, may contribute to or reinforce stigma and discrimination in communities of color and underserved neighborhoods.”

The report released Tuesday included demographic data that once again show coronavirus has disproportionately infected Oregon’s Latinx population. About a third of infections among people identified by ethnicity are Hispanic, according to state data, well above the statewide Hispanic population of 13%.

“Inequities in OHA’s data are likely to reflect the inequitable distribution of power and resources among Oregon communities,” Shirley wrote. “OHA believes by sharing this data, we can identify and continue conversations with affected communities for how to redistribute resources and power to rectify injustice. We are committed to helping the public better understand ‘why’ the impact of the disease is shouldered more by certain communities.”

But Rachael Banks, Multnomah County’s public health director, said the neighborhood numbers are not statistically significant and are skewed by the inclusion of cases at long-term care facilities.

“I think this data is not useful,” she said. “I think it’s not accurate to understand disease patterns.”

Banks said the Oregon Health Equity Alliance has raised concerns about the potential that certain communities will be targeted for hate or that others will try to draw inferences about who lives in communities with the highest numbers or rates of infection.

Banks said generally that the COVID-19 disease has “revealed how economics factor in” across the country and she suspects that may be happening locally, as well.

While front-line service employees continue to work and risk exposure, others with office jobs are able to telecommute, for instance. Infections could also spread more easily among households with more people, while families with fewer people may be better able to isolate at home, benefiting from simply having more bathrooms.

Banks said tracking where people live is the wrong metric for understanding community spread of coronavirus.

“It’s about where you’re exposed,” she said. “It’s about your exposure.”

But neither Banks nor other county health officials were able to immediately provide details showing what efforts Multnomah County has taken to quantify where known exposures have occurred by geography.

To be sure, the state data in some cases are skewed by outbreaks at long-term care facilities.

The report lists the 97236 ZIP code in east Portland as having the highest number of infected residents at 159, for example. But that volume can almost wholly be connected to large outbreaks at Healthcare at Foster Creek and Cornerstone Care Options. The state reported 117 infections linked to Foster Creek and 16 infections tied to the other facility.

It’s a similar story for the 97030 ZIP code in Gresham. The tally includes two care facilities where infections account for more than half of the reported 71 cases.

But other parts of east Portland, Gresham and the surrounding suburbs also have higher total cases and per capita rates that aren’t easily explained. The 97233 ZIP code in east Portland and Gresham has 49 identified cases, for example, or about 12 infections per 10,000 people.

Release of the statewide statistics also show just how disproportionately the novel coronavirus has affected residents in certain communities in Marion County. Officials there had previously released ZIP code level data but until Tuesday it wasn’t clear if other communities across the state were experiencing such localized infection rates.

The 97026 ZIP code for Gervais in northwest Marion County has the highest rate of infection in Oregon, at about 57 cases per 10,000, with 26 total infections. The neighboring ZIP code for Woodburn, 97071, is just below that rate at 54 infections per 10,000 people. It has recorded the second-most infections statewide, at 155.

It’s unclear what’s driving those rates and volume of infections.

Marion County officials did not make their public health director available for an interview and subsequently asked for, but did not respond to, written questions.

Mark Friesen contributed to this story.

This story was originally published by The Oregonian/OregonLive and is posted here through an agreement among more than a dozen media outlets to share coronavirus coverage.