By:
Angel Rosas of Gresham Outlook 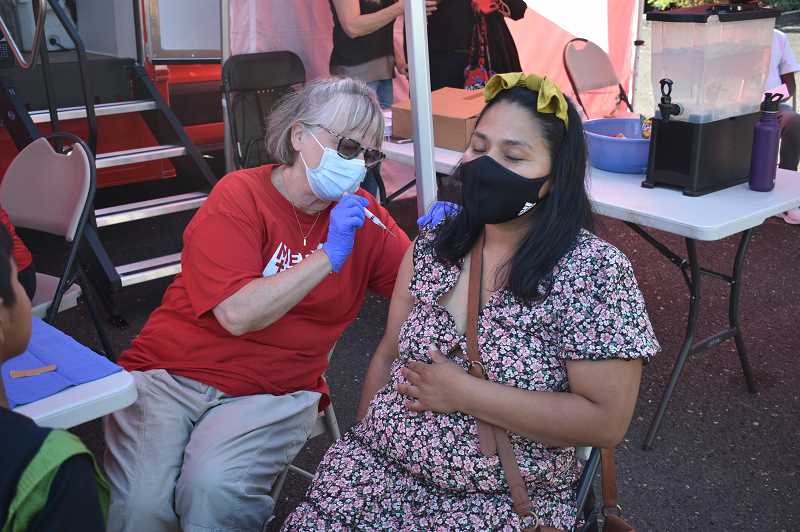 In an effort to increase COVID-19 vaccination rates in Multnomah County, financial incentives are being offered to people who thus far have been resistant or unsure of how to access the shots.

Wendy Lear, deputy director of the Multnomah County Health Department, explained that people who receive their first dose of a two-dose vaccine will receive $100, and another $50 for the second dose.

People who have proof of receiving their first dose before the incentive program began will receive the full $150 incentive upon receiving their second dose by the last day in July. The program continues through the end of August.

The county also implemented ambassador incentives of $50 for each person who brings in a friend or family member to get their vaccine. The ambassador can bring in eight people and must show they have already been vaccinated or are in the process.

"I gave a gentleman living out of his car $550," Lear said. "He was literally pulling people out of tents to get them vaccinated."

"We are targeting people who wouldn't otherwise get served," Wilson said.

Statewide, Multnomah County has one of the highest vaccination rates for COVID-19 at 72.6% of people 16 years and older who are full or partially vaccinated. However, language barriers are known to inhibit access to public health care and messaging.

Health specialists were invited to speak at the weekly People's Market where they urged people of diverse communities to get vaccinated, while promoting the gift card-based incentive for those who receive a vaccine or bring others to get theirs.

Play, Grow, Learn and Rockwood Food Systems Collaborative organizes the weekly market that brings Black, Indigenous and minority-owned vendors to the Sunrise Center at 18901 E. Burnside St. to sell fresh produce, food, clothing and other merchandise. The market opened on June 17 and continues through Oct. 14.

Wilson explained how the language barrier represents a significant hurdle for many people because it limits their ability to hear of vaccination opportunities. Nomi Gil, who primarily speaks Spanish, heard about the event through her children's Head Start program.

The clinic provided a Spanish translator who answered questions from Gil and other Spanish speakers.

Ebony Clarke, Multnomah County Health Director, said financial considerations represent another reason for why some people are not being vaccinated.

"Sometimes it is a choice between continuing to work a full eight hours or getting your vaccination," Clarke said. "We want to be able to compensate and close that gap."

Delila Tetteh, who lives in the St. Johns area of North Portland, said she was struggling to find a place near her home that would vaccinate her two children.

"I had to drive (my kids) all the way here to Gresham because they didn't have a place for 12 year olds (to get vaccinated)," she said.

Tetteh knew there was going to be an incentive, but she didn't expect the nearly $300 she received.

County officials hope to slow or reverse the trend of low vaccination rates among minority groups, especially in the Black community, through incentives and higher visibility during public events like the People's Market.

"The news flash is that we have only vaccinated about 46% of the Black population in Oregon," said Dr. Bukhosi Dube of the Oregon Health Authority. "That is not consistent with the 70%, or where the state is."

Dube said the new Delta variant is having a devastating effect on unvaccinated people. Germaine Flentroy, program coordinator of Play Grow Learn and organizer of the market, still hears the distrust of vaccine in the Black community.

"Black and brown people have been hesitant because we have always been the test-dummies," Flentroy said. "But it still has been difficult (for me) to understand why some people are still hesitant."

Flentroy said he hopes having county officials present at the event will help build more trust.