Multnomah County has fired its two top mental health leaders and promoted an insider to lead its Mental Health and Addiction Services Division following an investigation into complaints of abuse and neglect at the Unity Center for Behavioral Health.

The county announced in a news release on Wednesday that it had named Ebony Clarke the permanent director of the division. Clarke, 42, formerly the deputy director, had been serving as the interim chief since last August when Director David Hidalgo was placed on paid administrative leave along with Joan Rice, the quality manager. Hidalgo and Rice were fired Wednesday by Marissa Madrigal, the county’s chief operations officer.

“I have determined that your continued employment is no longer in the best interests of Multnomah County,” she told them in letters obtained Thursday by The Lund Report. “Please consider this letter your termination notice effective immediately. Your final paycheck will be sent to this address today.”

Hidalgo, who earned $155,803 annually, had served as head of the division for six years. Rice, quality manager for two years, earned $119,654 a year. Under county policy, all officials retain their retirement benefits. 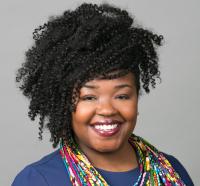 Clarke’s starting salary as the permanent director was set at $156,039.45 a year. She oversees a division budget of $111,042,244 and a staff of 264. She had served as deputy director of the division since 2014 and before that managed the county’s mental health services for children. A licensed clinical social worker with a bachelor’s degree from the University of Oregon and a masters from Portland State University, she’s worked in non-profit behavioral health services for 20 years, the news release said.

It’s not clear when the investigation will be finished. An initial review was expanded by Madrigal to include not only complaints at Unity but also of all calls about county mental health services. She told The Lund Report that she had lost confidence in how managers had dealt with the complaints.

A separate investigation is being conducted by the Multnomah County district attorney and the sheriff’s office.

In documents previously obtained by The Lund Report, officials had said that Hidalgo and Rice would stay on leave until the internal investigation was complete. But the county is still conducting its review, the news release said.

Monaco said that very few complaints were investigated and that county staff had not been trained on how to respond to complaints. The reports included two patient deaths at Unity.

Monaco reported the deaths to Rice who responded by saying the county wouldn’t do anything until hearing from Unity.

As quality manager, Rice was responsible for reporting on the performance of the division and promoting good outcomes. She oversaw a staff of 14.

The county is launching a recruitment process to replace Rice.