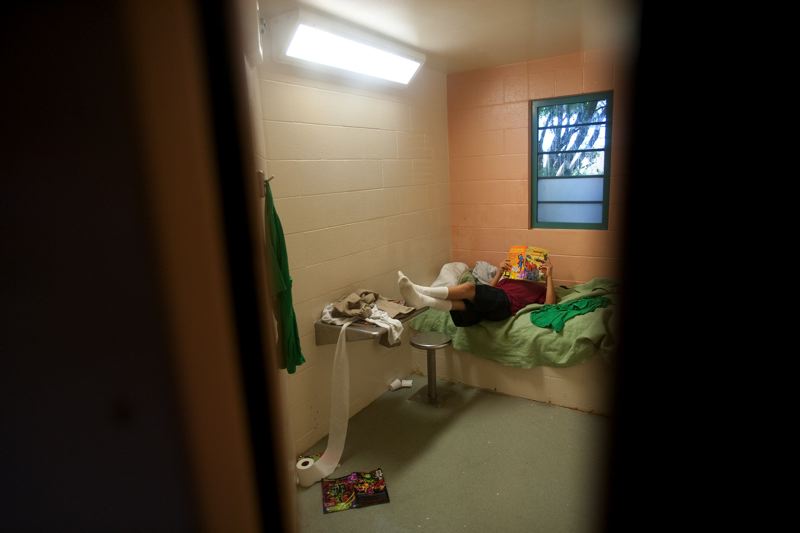 This 2011 photo shows a youth reading a comic book in a typical cell at the Mulnomah County Donald E. Long Detention Center./Portland Tribune

At the headquarters of the Multnomah County Department of Health, nine workers at the county's HIV clinic tested positive for COVID-19, forcing numerous others to quarantine and the clinic to shutter its doors for a four-day stretch in mid-December.

At the county's Donald E. Long Detention Center for juveniles, nine workers and three youth tested positive since the end of November, and jails operated by the Multnomah County Sheriff's Office have seen outbreaks of their own, with 13 inmates and 30 employees infected.

While no fatalities have been reported, taxpayers have picked up the tab for the outbreaks as dozens of workers were sent home for quarantine, numerous others called in sick and the employees who continued to come in have generated big overtime bills.

And in all three cases, employees say, managers either haven't taken safety seriously or have made decisions that increased the risk of infection, according to documents and interviews.

This despite the fact that Multnomah County government includes one of the best-funded and best-informed public health agencies in the state.

Multnomah Public Health Officer Dr. Jennifer Vines defends how county managers have responded. But while she frequently is featured in press conferences urging Multnomah residents to wear masks, stay home when sick and engage in physical distancing, Vines said ensuring county employees do the same is not her role.

She's there to give advice to other county agencies, she said, not make sure it's followed.

"Could or should (county) public health be more involved in making sure that best practices are followed? I would say, yes, and in an ideal world, we would be staffed to do that," she told the Portland Tribune. "But we simply don't have the resources to be sending people on site to do audits and walkthroughs."

Asked about the rash of workplace outbreaks and county employee complaints of unsafe practices or lack of information, Chair Deborah Kafoury, who oversees the county bureaucracy, said in an email, "This is a very difficult time, people are worried, and if there are issues, I want to know about them so we can fix them. From the first case of COVID-19 in this country, my number one concern has been the health and safety of the 800,000+ people who live here and the 6,000 employees at Multnomah County," Kafoury said.

She added that she believes the county has been following public health guidance, but "If I find out we haven't followed that guidance or missed any steps, I'll make the changes needed."

Kafoury may find that out soon.

On Dec. 22, AFSCME, which represents 3,200 county employees, sent an email to Oregon OSHA saying its members have been endangered by "Multnomah County's ongoing failure to adequately notify staff of COVID cases."

Health Department: Starting at the end of November through the first week of December, nine county health department employees tested positive at the county HIV clinic on the third floor of the Gladys McCoy building that serves as health department headquarters. Not until employee quarantines made it necessary did the county shut down the clinic for a four-day stretch on Dec. 14.

According to the union's email, only certain staff were initially notified. Only when the clinic had to shut down … was the entire clinic notified."

In an email to the Tribune, county officials defended their response to the outbreak, saying they consulted with the Oregon Health Authority, followed guidelines intended to protect infected employees' personal privacy, conducted vigorous contact tracing and workplace cleaning, and met minimum requirements for notifying employees.

The union email, however, noted that despite an earlier request from the union, the county didn't notify all McCoy workers until Dec. 16 — after AFSCME did so itself. This although "the building has shared commons areas and restrooms, there is interchange or movement of staff between floors, and it seemed prudent to provide a broad notification to staff throughout the building."

Multnomah County Detention Center: The AFSCME email said the county provides inadequate phsyical distancing for workstations of the Department of Health's mental health team at the downtown jail, but that management recently limited the ability of the team to do charting and administrative work remotely.

Then, when two employees recently tested positive there, their direct coworkers were not adequately notified, according to the union: "only a broad notification to all employees (of) corrections health that comprises three facilities and multiple teams, rooms, office locations, was provided.

Health privacy laws guard against release of an individual's state of health. Kafoury, in her response to the Tribune, said "Like every organization, we've had to walk that fine line between protecting confidential health information and sharing information with employees."

The union email, however, said it wasn't looking for infected people's names. "To be clear we aren't asking the County to share the names of staff who have tested positive but we are expecting that they give employees sufficient and timely notifications to prevent further exposures in the workplace and to protect their household members from this disease."

Eben Pullman, the union official who filed the complaint with OSHA, said it seems like the county appears to be making adjustments in response. But, he added, "we're still disappointed with how this rolled out and are going to continue to make sure our members' safety and their clients' safety are the first and foremost consideration at the county."

The public also was not notified of the Department of Health outbreak at the McCoy building.

Though the county routinely uses its website to notify the public about outbreaks such as at Donald E. Long and at jails run by the Multnomah County Sheriff's office, it did not post anything about the one at the Department of Health headquarters.

Nor, for reasons that are unclear, did the Oregon Health Authority, despite protocol requiring the reporting of all workplace outbreaks of five people or more.

County and state officials said they could not explain the lack of reporting by the state, though a Multnomah spokeswoman said officials believe the state was notified.

Outbreak Began With One Test

Employees, who declined to be identified due to fear of reprisal, said many employees feel management should have been doing more.

An Oct. 30, 2020 document from the county health department states flatly that employees at the facility "will be provided" face coverings by the county.

However, DCJ management required employees to ask for masks in order to get one. Many of them, and some of the youth in detention, ended up using homemade cloth masks made by a fellow employee who'd brought her sewing machine to work just for that purpose.

Another question raised concerned messaging, as the manager in charge, Deena Corso, repeatedly sent emails to staff between Dec. 3 and 14th saying "Public health indicates there has been no exposure to youth in detention."

But sources say the first youth to test positive, on Dec. 17, had been in detention for some time – suggesting they were infected by a county employee.

Vines, the public health officer, said her "best guess" is that disease was brought into the facility by staff.

Department of Community Justice Director Erika Preuitt told the Portland Tribune that she believes her department has followed all applicable guidelines and worked with public health "to ensure that we are keeping the youth, which is our first priority, and our staff, healthy."

But some think that some employees are not being truthful about symptoms in their attestations, and feel the department should be doing regular preventative testing of employees to detect COVID-19 cases, as some health care facilities do in the area.

Corso responded to that sentiment in a Dec. 30 staff-wide email, saying that preventative mass testing "is not supported by Public Health because of the lack of reliability of the testing," she wrote. "For example, someone who was positive previously but is no longer contagious may still show up positive, while someone who was infected shortly before being tested may be contagious but show up negative."

Testing, of course, is central to how public health authorities around the country are responding to the pandemic. Asked to explain Corso's email, Vines, the county public health officer, said "I would not have phrased (it) that way."

Vines said her stance against preventative testing is partly based on not wanting to use too many test. Testing is "low-yield" when people don't have symptoms or contact," she said, and sometimes positive tests don't mean you are contagious. "It doesn't turn up information that you can act on," she said. "You can use a lot of tests and not find many cases."

Meanwhile, outbreaks have also erupted at the county's two jails: 10 inmates and 23 staff members at the downtown Multnomah County Detention Center since late October, and three inmates and seven staff at Inverness Jail since Dec. 5.

Employees there, however, similarly complain that management shortcuts have increased the risk to staff.

Last June, the sheriff's office assured the Multnomah County Board of Commissioners that all incoming inmates were spending less time at the downtown jail in single cells for observation before being moved to group housing.

Since then, the time in observation has been cut to just two days per prisoner — well below the incubation period for COVID-19 — before they are shipped to Inverness.

The reason? A project to upgrade technology in the downtown jail is closing one floor at a time — and the work has so far taken far longer than anticipated.

Mark Bunnell, head of the Multnomah County Corrections Deputies Association, was generally positive about management, but said the decreased new-inmate time at MCDC due to the technology project is the "most glaring hole" in how management has handled the pandemic.

"It's an issue of money," he said. "I think the timing is poor … the pandemic should be the number one priority at the sheriff's office."

Chris Liedle, a spokesman for Reese, in an email denied that the change cited by Bunnell had affected safety, saying that new inmates are spending 14 days alone in a holding cell regardless of which jail they're in.

He said the project included a new camera system that is already providing benefits by aiding in contract tracing efforts.

Employees also complain that even as physical distancing has been limited or non-existent in the jails, Multnomah County has for the most part continued to keep five dorms closed at Inverness, thus increasing crowding and risk of infection in the dorms that are open.

Many Inverness inmates don't wear masks and are allowed to congregate in cramped areas, including at mealtime. Physical distancing and mask-wearing, employees say is not enforced.

"We've been told they can't require that in the dorms because that's where (the inmates) live," Bunnell added. "We don't really agree with that."

Bunnell said the sheriff has taken steps to try to reduce the jail population and thereby increase distancing: "They have kept the populations down. Whether it's enough is where we disagree."

Asked about the situation on Saturday, Liedle said on Monday that the sheriff happened to have opened up an additional dorm on Saturday as part of an effort to increase physical distancing. "This has been done in the past" as the jail population "ebbs and flows," he said.

This story was originally published by the Portland Tribune and is shared her through an arrangement with a dozen media outlets sharing content related to the coronavirus.