County and city officials have asked for an assessment to investigate the health ramifications of transporting coal through the area
By:
Christen McCurdy 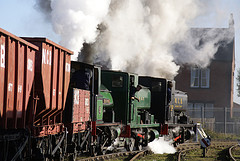 September 27, 2012 -- Following calls by neighborhood activists as well as members of the medical community, Multnomah County Health Department staff have been asked to conduct a health impact assessment investigating the likely health effects of coal trains traveling through the area on their way to ports of Portland and Seattle, from which they would then be shipped to China.

“Basically what our department has been asked to do by the county department chair is look at the potential health impacts of coal traveling through the county by rail,” said Dr. Gary Oxman, health officer for Multnomah County.

Last week the Portland City Council voted to oppose coal trains running through the city until environmental and health impacts have been completed, right on the heels of an announcement from County Chair Jeff Cogen who ordered a health impact assessment evaluating the potential impact of coal trains on human health.

Oxman said his team will begin by reviewing scientific studies on the health effects of coal dust and diesel exhaust on air and water quality and human health. Staff may also look at other health effects, such as whether the presence of trains would have any effect on emergency response following accidents or disasters, as well as sleep disturbances due to noise from the trains.

“The trains in questions, at least as far as other proposals, are going to be long, slow trains, transitioning through other neighborhoods,” and could number as many as 15 per day, Oxman said. That could create a major bottleneck in some communities, making it difficult for ambulances to cross tracks in an emergency, as well as increasing noise and pollution.

“This is one of those situations where no decisions have been made. Our leaders just feel like it's necessary to take a look at the impact on this,” Oxman said.

Health impact assessments are a relatively new tool in public decision-making, said Steve White, a project manager for the Oregon Public Health Institute who has worked on health impact assessments related to other local policy matters. Since they focus on the possible ramifications of a specific policy decision and have to be delivered on a specific timeline, they can vary in terms of depth and quality, he added.

White said a good health impact assessment should look at the way a proposed decision will affect the “broader quality” of health in a community, not just a specific set of issues or toxins.

Noting that most of the discussion so far around the potential health impacts of coal trains has focused on coal dust and diesel exhaust, White said the assessment should take into account other factors that could influence a community's health.

“In addition to looking at those two issues, which would be crucial, we might expect to see changes in jobs that would have a positive health impact,” White said.

Economic impacts are “always a balancing point,” and potential benefits of coal exports should also be taken into account, said Oxman, who added that additional staff would not be hired, rather the department would utilize its current staff.

“This is just part of the work we do to understand what the health risks are in our community so the department and the community can participate actively in decisions that impact people's health,” he added.

Image for this story by Ian Britton (CC BY-NC 2.0) via Flickr.