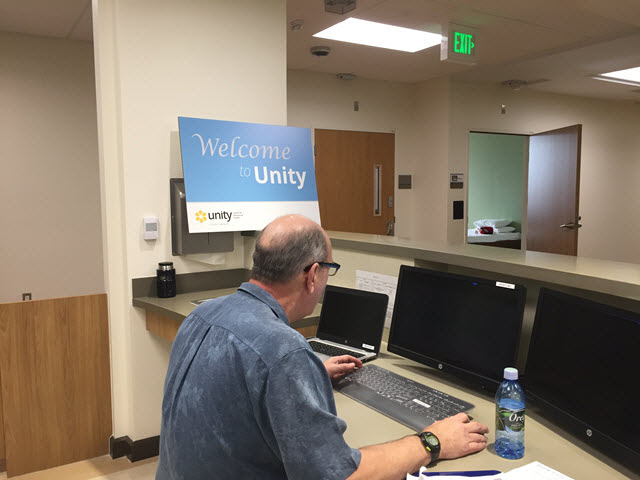 Multnomah County Board of Commissioners on Thursday agreed to settle with a whistleblower who repeatedly warned county officials about serious safety problems at Unity Center for Behavioral Health.

Under the agreement, the county will pay Greg Monaco, a former county mental health investigator, $100,000.

"In my professional judgment, it's in the best interest of the county to approve it," Landrum said.

Monaco had asked for $1.1 million in a lawsuit filed last year which said he was subjected to intolerable working conditions after raising concerns about abuse and neglect at Unity, the state's only psychiatric emergency hospital. It's run by Legacy Health in partnership with Kaiser Permanente, Adventist Health and Oregon Health & Science University. It opened in 2017, after failed inspections, the suit said. From the start, Monaco was worried about conditions there.

"From the time of opening and continuing thereafter, Monaco heard Unity nurses raise complaints about understaffing, poor management, inappropriate injections and safety concerns, as well as a culture of retaliation against any nurses who complained about the health and safety risks faced by patients and staff," the suit said.

Monaco was pressured to retire, which he did in 2018. That same year, the Oregon's workplace safety agency fined Unity $1,650 for failing to curb violence and investigate workplace injuries. And in 2018, the Oregon Health Authority completed a survey that found the facility at fault for regulatory violations involving patient rights and nursing services. The facility was given 90 days to improve or lose its license.

The health authority lifted its threat but Unity is still not out of trouble. Talks are underway among Unity and Oregon Health Authority officials over Unity's financial troubles. The Northeast Portland facility racked up $35.3 million in losses through the fiscal year 2019 and expects to lose another $21.4 million. It also has a treatment crisis, with patients stuck in recliners for days, awaiting in-patient admission.

Other whistleblowers have also sued Unity. A complaint by a mental health therapist, Rick Scroggins, that seeks $700,000 in damages is pending in court.

Who are the attorneys for these whistleblowers?