The growing abuse of prescription painkillers now touches home for a majority of Americans, according to a poll released Tuesday.

More than 56 percent of the public say they have a personal connection to the issue, reports the latest monthly tracking poll of the Kaiser Family Foundation. That share includes those who say they know someone who died from a painkiller overdose, have been addicted themselves or know someone who has and those who know someone who took painkillers not prescribed to them, the poll’s results show. (KHN is an editorially independent program of the Foundation.)

Details from the poll:

— 27 percent say either they have been addicted to painkillers or they have known a family member or close friend who was.

— 63 percent of whites say they have a personal connection to the abuse of prescription painkillers compared with 44 percent of blacks and 37 percent of Hispanics.

Half of those surveyed rank prescription painkiller and heroin abuse as a top priority for their governor and legislature, behind improving public education and making health care more accessible and affordable, which drew 76 percent and 68 percent shares, respectively.

Sixty-two percent of those polled said the drug Naloxone, which can reverse an overdose and is handed out in some states without a prescription and for little or no cost, should only be available via prescription.

Efforts to reduce painkiller abuse would be at least somewhat effective, many Americans say. Providing treatment for addicts is cited by 85 percent, monitoring doctors’ prescribing habits by 82 percent and encouraging people to dispose of leftover medication by 69 percent.

Kaiser’s tracking poll was conducted Nov. 10 to 17 among 1,352 adults.The margin of error for the full sample is +/- 3 percentage points. 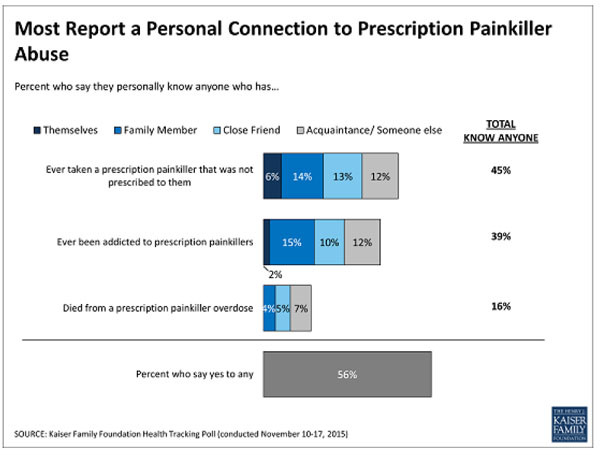