More Vapers Are Making Their Own Juice, But Not Without Risks 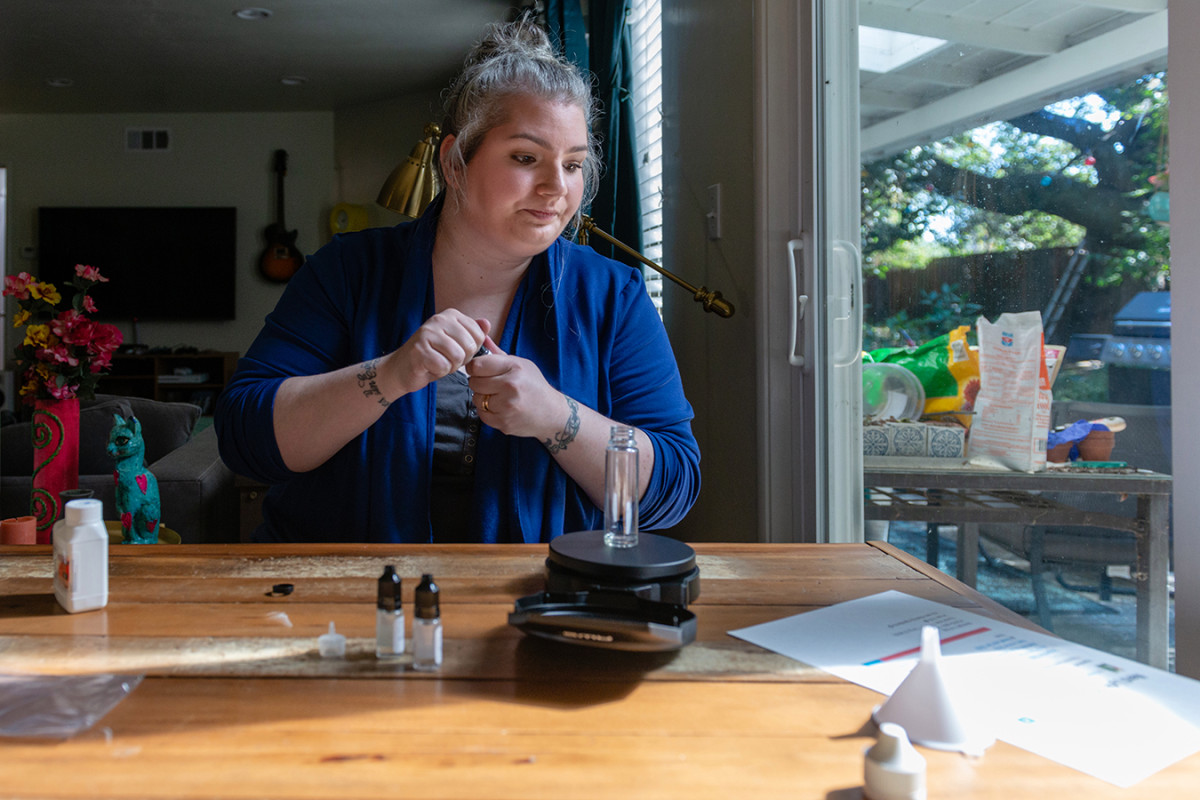 Danielle Jones reads through the recipe for Nerd Lyfe (v2) vape juice. After five years of buying her favorite flavor (red licorice) at her local vape shop, this is Jones’ first attempt at making her own e-liquid./Heidi de Marco/KHN

Danielle Jones sits at her dining room table, studying the recipe for Nerd Lyfe (v2) vape juice. The supplies she’s ordered online are arrayed before her: a plastic jug of unflavored liquid nicotine, a baking scale and bottles of artificial flavors that, combined, promise to re-create the fruity taste of Nerds Rope candy in vapor form.

This is Jones’ first attempt to make her own e-liquid after buying it for the past five years. Jones, 32, wants to be prepared for the worst-case scenario: a ban on the sale of the e-liquids she depends on to avoid cigarettes.

“Even though I haven’t touched a cigarette in five years, the pull is always there. It’s so easy to go and buy a pack. And I don’t want to do that,” she said. “The only route I can see going forward if there is a ban is to try to create the product myself at home.”

As more states, cities and even the federal government consider banning flavored nicotine, thousands of do-it-yourself vapers like Jones are flocking to social media groups and websites to learn how to make e-liquids at home.

Users on the forums — many of whom have been mixing their own e-liquids for years — describe the process as simple, fun, cheap and, with the proper precautions, safe. But if not done carefully, making e-liquids at home may pose risks including accidental exposure to high doses of liquid nicotine, the use of dangerous oil-based flavors and possible product contamination.

“To have people mixing their own e-cigarette liquid is crazy. These are very toxic chemicals,” said Stanton Glantz, a professor of medicine and the director of the Center for Tobacco Control Research and Education at the University of California-San Francisco. “If you drop a little bit of nicotine on your skin, it can send you to the hospital.”

But Dr. Michael Siegel, a professor of community health sciences at Boston University, said many people are able to make vaping liquids safely at home, by seeking advice from other vapers and following a few safety measures, such as wearing gloves and goggles.

Siegel worries, however, about the risk of contaminated products as some people use the bans as an opportunity to make their own concoctions cheaply and sell them on the black market.

“Who knows what they’re going to put in there?” Siegel said. “This is just what happens when you use prohibition as a regulatory approach. What’s really needed in this situation is actual regulation of these products to try to make them as safe as possible.”

Michigan, Massachusetts, New York, Utah and Rhode Island have passed emergency rules to restrict the sale of e-cigarettes in response to the recent outbreak of vaping-related illnesses, which had sickened 2,051 people and killed 39 as of Nov. 5, according to the Centers for Disease Control and Prevention. In a potentially significant breakthrough, the CDC on Friday said it had identified a link between the mysterious outbreak and vitamin E acetate, an ingredient sometimes added to marijuana-based vaping products.

An additional 220 localities, including San Francisco and Los Angeles County, have passed restrictions on the sale of flavored tobacco products, according to the Campaign for Tobacco Free Kids. Details of an expected federal ban have not been released.

Following a rush of new bans in September, a Reddit forum on DIY e-juice saw a spike in membership, the group’s moderator reported. The daily number of new subscribers had long hovered around 30; that number spiked to 336 new subscribers in a single day, followed by more than 200 the next day, and it remained high throughout the month.

The group now has over 52,500 members sharing recipes for flavors such as white chocolate chip cookie, discussing how to make a watermelon that doesn’t taste “soapy,” and asking for tips on how to store supplies safely. Thousands of recipes for e-liquids in myriad flavors can be found in such forums and elsewhere on the internet.

Mike Olson, a resident of Illinois, has stockpiled a multiyear supply of highly concentrated nicotine because he’s so worried about a ban on the sale of flavored vapes. He said he uses gloves and safety goggles while handling it and stores it high up in a closet to keep it away from his dogs.

Not everyone, however, is so scrupulous about safety. A member of the Reddit group, for example, recently posted that he had accidentally sprayed liquid nicotine into his eyes as he tried to remove it from a vial with a syringe. He said his eyes were stinging and turned bright red within a minute, but he washed them out repeatedly. Other members responded with warnings to use protective equipment.

Poison control centers have received 3,583 calls about exposure to e-cigarette devices and liquid nicotine so far this year, as of Sept. 30, according to the American Association of Poison Control Centers. About 50% of the calls are for children 5 years or younger.

Many of the safety risks of DIY vaping also apply to commercial products. The safety of inhaling food flavorings, for example, has not been established, even in commercially manufactured e-liquids. The Flavor and Extract Manufacturers Association certifies flavored liquids for safety — but only when they are used in food, said John B. Hallagan, a senior adviser to the industry group.

But the U.S. Food and Drug Administration does regulate commercial vaping products to some extent. And while critics say regulation has been inadequate, the agency has nonetheless conducted thousands of inspections of e-cigarette manufacturers and retailers. DIY e-liquids made at home for personal use do not fall under FDA jurisdiction.

Alex Clark, CEO of the Consumer Advocates for Smoke-Free Alternatives Association (CASAA), said he plans to warn the nonprofit’s more than 200,000 members about the dangers of making e-liquid at home.

Clark notes that people should not use flavors found in the baking aisle of a grocery store, such as peppermint oil and lemon extract, because heating and inhaling them can cause lipoid pneumonia, which is potentially life-threatening.

Though a first-time DIY-er, Danielle Jones may have better access than many people to advice on making e-juice safely at home. She works for a company that manufactures the cotton wicking used in vaping devices, sits on the board of CASAA and hosts a YouTube Live show about vaping.

Jones wants to make the process as simple as possible.

She went online to purchase unflavored nicotine that had already been mixed with additives and diluted to her desired concentration. All she needs to do is add the flavors, also purchased online.

“This is complicated,” Jones says, consulting the Nerd Lyfe recipe, which calls for a mix of five flavors: Dragonfruit, Marshmallow, Rainbow Drops, Red Licorice and Sweet and Tart. She opens each bottle and carefully squeezes out a few droplets at a time, her gray hair pulled safely out of her eyes into a loose topknot.

Next comes the nicotine, which resembles a doll-sized plastic jug of gasoline. As she peels off the seal, she gets a little of it on her fingers. But that does not worry her: “This is the same as my commercially available product, and I get that on my fingers all the time.”

The whole process takes Jones about 15 minutes, and the solution is ready to vape. She heads out into her garden, gives the bottle a final shake and squeezes some into her iridescent purple device.

She takes a deep hit, great clouds of vapor billowing out of her nose and mouth. The air smells candy sweet, like inhaling a box of Nerds.