Sen. Laurie Monnes Anderson, the chairwoman of the Senate Health Committee, often faces tough re-election challenges, and this year’s no exception. But missteps by her opponent have left Democrats confident of her victory and helped them shift resources to replacing the late Sen. Alan Bates in southern Oregon.
By:
Chris Gray 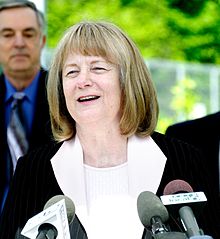 Every four years, Sen. Laurie Monnes Anderson, D-Gresham, pounds the pavement, walks the streets of her east Multnomah County district and knocks on doors, taking no vote for granted.

She lost her first race for the Legislature in 1998, but has done this work, connecting with her constituents, to win every election contest since, including two races for the state House and three in the state Senate.

“She knocks about 300 doors a week,” said Dan Torres, the campaign spokesman for the Senate Democrats, who said that Monnes Anderson and her campaign helpers had knocked on 12,000 doors this year.

“I’ve lived in Gresham most of my life,” Monnes Anderson said. “I’ve been able to really make a difference,” she said, noting recent child abuse legislation and restrictions on e-cigarettes. In February, she’ll try again to require tobacco retailers to be licensed, legislation that has been defeated each of the past two years despite majority support. Oregon is one of the few states that does not require licensure, which proponents argue makes it easier for minors to buy cigarettes.

Four years ago, more than $1 million was spent on the state Senate race. Monnes Anderson’s total was $655,000, which she used to defeat Republican Scott Hansen by 10 percentage points.

The race is of chief interest to the healthcare industry because of her position as chairwoman of the Senate Health Committee, where she serves as a moderate, business-friendly counterpart to the more liberal House Health chairman, Rep. Mitch Greenlick, D-Portland.

But this year, she’s only had to raise $237,000, as her opponent, Fairview City Councilor Tamie Tlustos-Arnold, has failed to gain traction, raising $117,000, the majority of that from the Senate Republican campaign fund. Nike tycoon Phil Knight passed Tlustos-Arnold over even as he opened his purse for several other Republican candidates.

Monnes Anderson recently received a $5,000 donation from the Oregon Health Care Association, which represents long-term care providers, and $5,000 from Capitol Dental, both of which had already spent $2,500 on her campaign this spring. Her leading contributor overall was FamilyCare, which gave her $10,000, not counting another $2,200 from the Coalition for a Healthy Oregon, of which FamilyCare is a chief member.

The district has trended more reliably Democratic, with an influx of minority voters, particularly Latinos, who can increasingly not afford to live in gentrifying Portland. Monnes Anderson said the skyrocketing rental market in Portland has created new housing problems and homelessness in Gresham unlike anything she’s seen.

This past term, she worked to get funding for wraparound services for homeless students in the Reynolds School District, and she’d like to expand youth behavioral health access and have more school nurses in schools.

Tlustos-Arnold did not respond to requests from The Lund Report to be interviewed. But like Monnes Anderson, Tlustos-Arnold is a registered nurse with an impressive community presence, including a seat on the Mt Hood Community College board and the West Columbia Gorge Chamber of Commerce.

She was elected to the Fairview City Council in 2012, but this summer, a former fellow councilor targeted her, the Fairview mayor, and a second councilor, for a recall. The recall petition failed to get enough signatures to force an election, but swatting away a local feud doubtless took away energy from unseating Monnes Anderson.

Monnes Anderson’s command of the race has shifted resources to southern Oregon, where the vacancy left by the death of Sen. Alan Bates, has created an opening for a Republican pickup, with former Ashland Mayor Alan DeBoer going up against Democratic attorney Tonia Moro, who serves as the chairwoman of the Rogue Valley Transit District board, but has otherwise not held elective office.

Torres said that despite her opponent’s prominent office, Moro was also well known in the district. “She worked closely with Doc Bates on getting funding for mental health.”

The other seat Democrats are working hard to defend is on the south and central coast, held by Sen. Arnie Roblan of Coos Bay. Torres said the Democrats have good odds, noting Roblan’s long track record in Coos County as a teacher, high school principal and state representative, even as the region grows more Republican, particularly in the southern part of the district.

Monnes Anderson said she has worked closely with Sen. Jeff Kruse, R-Roseburg, on the Health Care Committee, as well as Sen. Brian Boquist, R-McMinnville, on veteran’s issues, leaving her well positioned even if the Democrats lose their supermajority. She said her district had anti-Hillary voters as well as Latino school children who are afraid a President Trump may break up their families.

With such an uneven district, Monnes Anderson has often taken positions more in line with business and the healthcare industry, much to the chagrin to some of her Democratic colleagues.

For years, she stymied the efforts of Sen. Chip Shields, D-Portland, to reform the insurance industry, helping to keep its status as the only business sector not covered by the state consumer fraud act. She also opposed attempts from Sen. Elizabeth Steiner Hayward, D-Beaverton, and the Oregon State Public Interest Research Group to force the hospital industry to be more transparent about the cost of their services.

But this cycle, Monnes Anderson is joining Greenlick’s efforts to require hospitals to be more generous if they want to keep their tax exemption status and not allowing them to count lower-than-desired reimbursement from Medicaid and Medicare as charity care.

For years, the hospitals claimed that uncompensated care led them to charge private insurers higher rates, but as the Affordable Care Act reduced the numbers of uninsured, the hospitals have piled up reserves and bought smaller physician clinics rather than pass any savings onto the insurance industry or consumers.

Monnes Anderson said the state would also look at requiring hospitals to pay property taxes on the clinics, which under previous ownership were often for-profit, but were delisted from the tax rolls once they came under the umbrella of a health system. “This isn’t fair. Other clinics pay taxes,” she said.