A federal report calls the regulators to ramp up oversight of the industry, citing patients in pain or distress and a lack of care.
By:
Melissa Bailey 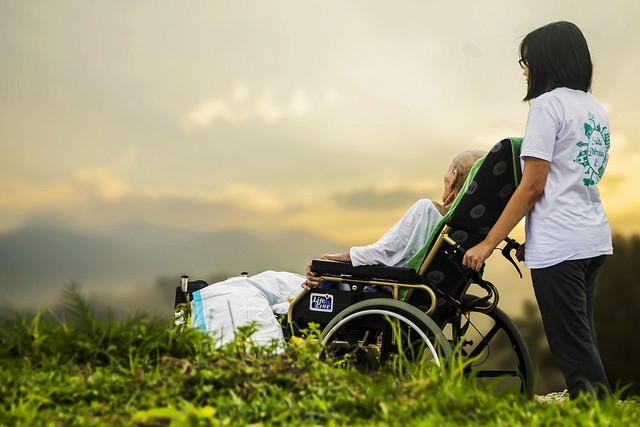 Elderly patients spent over two weeks in uncontrolled pain or respiratory distress. Acute care was rare on weekends. And recruiters went door to door pitching fraudulent schemes, luring healthy patients to sign up for hospice in exchange for free housecleaning and medicine.

These details appear in a report on hospice released Monday by a government watchdog agency calling on federal regulators to ramp up oversight of a booming industry that served 1.4 million Americans in 2016.

The report from the Office of Inspector General at the Department of Health and Human Services sums up over 10 years of research into inadequate care, inappropriate billing and outright fraud by hospices, which took in $16.7 billion in Medicare payments in 2016.

The Medicare hospice benefit aims to help patients live out their final days in peace and comfort: It pays for agencies to send nurses, aides, social workers and chaplains to visit patients who are likely to die within six months and who agree to forgo curative treatment for their terminal illness. Most of the time, this care takes place where the patient already lives — their home, nursing home or assisted living facility.

A Kaiser Health News investigation last year revealed that while many of the nation’s 4,000-plus hospices earn high satisfaction rates on family surveys, hundreds fell short of their obligations, abandoning families at the brink of death or skipping other services they had pledged to provide.

The inspector general's report points to similar gaps in care and raises concerns that some hospices are milking the system by skimping on services while taking in daily Medicare payments.

Regardless of how often their staff members visit, hospices collect the same daily flat rate from Medicare for each patient receiving routine care: $193 for the first 60 days, then $151 thereafter, with geographic adjustments as well as extra payments in a patient’s last week of life.

The report calls on the Centers for Medicare & Medicaid Services to take 15 actions to improve oversight, including tying payment to quality of care and publishing public inspection reports on its consumer-focused website, Hospice Compare, as it does for nursing homes.

In a letter to the inspector general in response to an earlier draft of its report, Administrator Seema Verma objected to those two recommendations as well as six others. She concurred with six other recommendations and wrote that the Centers for Medicare & Medicaid is “committed to ensuring that the Medicare hospice program provides quality care safe from fraud, waste, and abuse.”

The report's findings include:

Basic care only: In 2016, 665 hospices provided only the most basic level of care, called routine home care. This is a red flag, report argues, suggesting that patients may not be getting the care they need: Medicare requires hospices to offer three other types of care — general inpatient care for acute conditions such as uncontrolled pain, continuous care in a crisis and respite care to offer a caregiver temporary relief.

Inadequate acute care: Hospices failed to provide adequate nursing, physician or medical social services in 9 percent of general inpatient care stays in 2012. Examples of poor care included a 101-year-old man with dementia who had uncontrolled pain for 16 days, and an 89-year-old man who had uncontrolled respiratory distress and anxiety for 14 days.

Weekend visits rare: Hospices rarely provided services on the weekends to patients in assisted living in 2012. Hospices were also more likely to provide general inpatient care on weekdays than on weekends, according to an analysis of 2011 data.

Missing services: In nearly a third of Medicare claims filed for patients living in nursing homes, hospices provided fewer services than they promised in patients’ plans of care, according to a 2009 report. This is notable, the OIG argues, because hospices set their own plan of care for each patient, and fell short of the bars they established.

Few or no visits: On average, hospices provided only 4.8 hours of visits per week, in exchange for $1,100 in weekly Medicare payments, for each patient receiving routine home care in an assisted living facility in 2012, OIG found. Most visits came from aides. In addition, 210 of those patients did not receive any hospice visits that year, despite Medicare paying $2.3 million for their hospice care.

Responding to these findings in her letter, Verma said CMS has taken various actions, including: auditing certain hospices’ medical records before claims are paid, monitoring hospices that have many patients in nursing homes and recouping money from hospices that inappropriately billed Medicare for general inpatient care stays.

“Hospice is quite different than it used to be,” Harrison said. “When it started out, there were faith-based and nonprofits,” and most patients had cancer. As of 2016, there were 4,374 hospices receiving Medicare money, about two-thirds of which were for-profit.

Fraud has pervaded the industry, with some hospices ripping off taxpayers by enrolling patients who are not dying, paying kickbacks for patient referrals or carrying out various inappropriate billing schemes. From fiscal years 2013 to 2017, inspector general investigators won back $143.9 million from 25 criminal actions and 66 civil actions against hospices.

Fraud has run wild in Mississippi, where hospices were paying recruiters to solicit business door to door from people who were not dying. The recruiters offered free housecleaning, medicine and doctors’ visits to patients who signed up — not knowing they were enrolling in hospice and forgoing Medicare payment for curative care, according to inspector general field agents. One recruiter, a convicted sex offender, was sent to prison for 40 months in 2016 for taking payments from five hospices, earning $200 to $600 for each hospice-inappropriate Medicare beneficiary he sent their way.

Also in Mississippi, hospice owner Regina Swims-King was sentenced in 2014 to nearly six years in prison for an $8 million Medicare fraud scheme involving patients who did not need hospice, services that patients never received and claims based on forged doctors’ signatures. She forfeited 12 real estate properties and 17 vehicles.

Charles Hackney, an assistant special agent in charge who oversees inspector general investigators in Mississippi, said fraud there, which was perpetrated by small mom-and-pop operators, has subsided after many criminal convictions.

Edo Banach, president of the National Hospice and Palliative Care Organization, an industry group, did not have a copy of the OIG report to review before publication. But in a statement, he said “incidents of deliberate fraud and abuse in the hospice community, though rare and isolated, are indefensible.”

He said his group aims to work with the Trump administration to “simplify and streamline the compliance process” in a way that “encourages honest and law-abiding hospice providers” while protecting against fraud.

Banach suggested the inspector general also examine an issue not mentioned in the report: “underutilization of hospice care, which keeps too many Americans from accessing quality end-of-life care when they need it.”