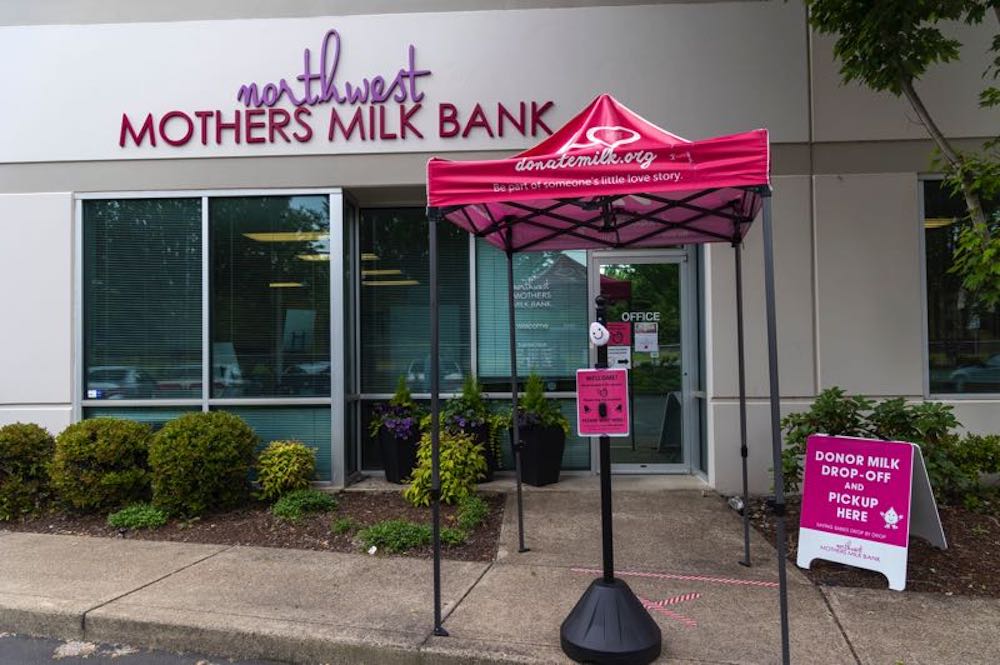 It's an immeasurable fear to not know whether you're going to be able to find any baby formula — let alone the right formula — for your newborn.

"It is heartbreaking to hear people tell you that they're going from store to store to store to try to feed their baby," says Lesley Mondeaux, director of the Tigard-based nonprofit Northwest Mother's Milk Bank.

But amid the ongoing formula shortage, mothers in the Portland area have been stepping up in huge numbers to donate breast milk, helping to ensure regional reserves remain available to feed babies, Mondeaux says.

The shut down of Abbott Nutrition's Michigan baby formula plant in February triggered the nationwide shortage after bacterial contamination concerns at the facility prompted a recall of several of the most-used formulas in the country.

Out-of-stock rates for formula in Oregon topped 85% for the week ending May 28, according to data from the retail data tracker Datasembly.

As the only milk bank in the Northwest, Mondeaux's organization works to supply donated breast milk to mothers in need across Oregon, Washington, Alaska and Idaho. The milk bank prioritizes the most vulnerable newborns to receive donations, requiring a doctor's prescription because donated breast milk is a limited resource.

One of the biggest populations the milk bank serves is families with babies born prematurely. Many of those families still need to supplement breast milk with formula because their babies require so many extra calories and nutrients for growth, Mondeaux said.

The milk bank's hospital orders, which account for roughly 75% of what it supplies, have increased substantially in recent weeks as hospitals react to continued shortages of formula, according to Mondeaux.

Meanwhile, calls from mothers interested in donating milk have increased threefold, she said. Also, the milk bank is screening about two times as many potential donors compared to this time last year.

"Milk donors are heroes," she said. "Families just want to help other families. It's very heartwarming."

Need, and donations, up

On a recent Thursday morning, with several walk-in storage freezers containing racks of frozen milk buzzing in the background, workers in the milk bank's intake area were unpacking boxes of donated milk. The 18 boxes received that day was higher than the daily average of 10 to 12, one worker said, adding that she's received as many as 54 boxes in a day.

There are many reasons why families might feed their babies formula, said Dr. Shaili Rajput, a pediatrician at Kaiser Permanente and child health advocate with the Oregon Pediatric Society.

Many mothers don't produce enough milk to supply all of what their baby needs or have trouble sustaining production for the time — at least four to six months of a newborn's life — for which exclusive breastfeeding or formula use is recommended, Rajput said.

Mothers also can have anatomical issues that make providing milk difficult or painful. If a mother has twins or triplets, chances are high that she is going to need to at least supplement breastfeeding with formula, Rajput said.

There also are a lot of socio-economic factors that make lower-income mothers more likely to rely on formula, she said. Many employers don't give mothers any paid maternity leave. Also, many mothers work multiple jobs to make ends meet, and finding the time to pump or breastfeed can be difficult.

It's those same factors that can put mothers at a loss for what to do to feed their babies if they don't have time to drive to multiple stores or long distances to find formula, Rajput said. About 15% of her patients are in low-income situations and use the Oregon Health Plan for insurance, she said.

"Those photos of empty shelves are a really stark picture of what the situation is looking like," Rajput said. "That's nothing I ever imagined I would see. This is basic, essentially life-sustaining nutrition that should be readily available at all times."

For the most part, her patients have been able to find the right amount of formula, Rajput said, adding that doing so has come with a lot of stress.

"We screen every patient for food insecurity to make sure they have what they need," she said. "But when you are struggling to feed your baby, you might not be coming into doctor's visits. It's challenging to get places when you're struggling to meet your child's most basic needs."

Mondeaux said that, within the last couple of weeks, the milk bank has increasingly received calls from mothers with newborns who've so far been able to find enough formula but are anxious about whether they'll be able to find it in the future.

Expectant mothers who are planning to breastfeed also have been increasingly calling to try to establish backup plans in case breastfeeding doesn't go well, she said.

Where help is needed most

The milk bank is always trying to expand the number of people it can serve outside of hospitals, Mondeaux said, adding that the increased donations help. Sometimes, the milk bank is able to provide families with a short-term supply of milk until they're able to establish breastfeeding or to find formula, she said.

The milk bank's clients pay a small processing fee to cover the costs of donor screening, milk pasteurization and distribution. But the nonprofit also has programs that allow families to pay a discounted rate or forego payment to ensure that income is not a barrier.

A high percentage of families who feed their babies with formula turn to the U.S. Department of Agriculture's Special Supplemental Nutrition Program for Women, Infants and Children (WIC) to pay for it.

Multnomah County's WIC program currently serves about 9,000 families, including 2,500 families with infants, said Sarah Hallaj, a program clinic supervisor with the county. About half of those infants rely 100% on formula for their nutrition, with another portion using some formula, she said.

WIC staff have been going out to stores in the area to check on formula supplies, fielding reports of where it might be available to pass on to families and calling families to ask how they can help, Hallaj said.

"Our call center has been busy," Hallaj said, adding that they have a call list to make sure everyone gets a response. Staff also have been texting clients to make communication easy.

Oregon WIC received USDA approval to temporarily add 80 different formula types and sizes to the list of products families can purchase with their WIC cards.

Veronica Lopez Ericksen, interim nutrition programs manager for the county, attributes those changes in part to the ongoing advocacy she and other WIC officials across the state are doing to boost WIC participants' access to formula.

Officials also are advocating for expanding how WIC participants can use their benefits, including purchasing formula online, Lopez Ericksen said.

"It provides that opportunity to bring more equity to our participating families," she said.

On Saturday, June 4, Abbott Nutrition said it had restarted the production of several formulas.

For more information about what to do if you can't find formula, visit healthychildren.org.

Max Egener is a reporter for The Portland Tribune and can be reached at [email protected]. This article used with permission of the Pamplin Media Group. Read more from Oregon’s largest source of independent local news at pamplinmedia.com.

Jun 7 2022
News source:
Portland Tribune
Keywords:
formula shortage, breast milk
×
This article is for premium subscribers. If you are one, please sign in below.
You can see two more premium stories for free. To subscribe, click here. We depend on premium subscriptions to survive, and they are tax deductible.
Sign InGo Premium Not now