Measures To Fight Addiction Are Stalled In Oregon Legislature 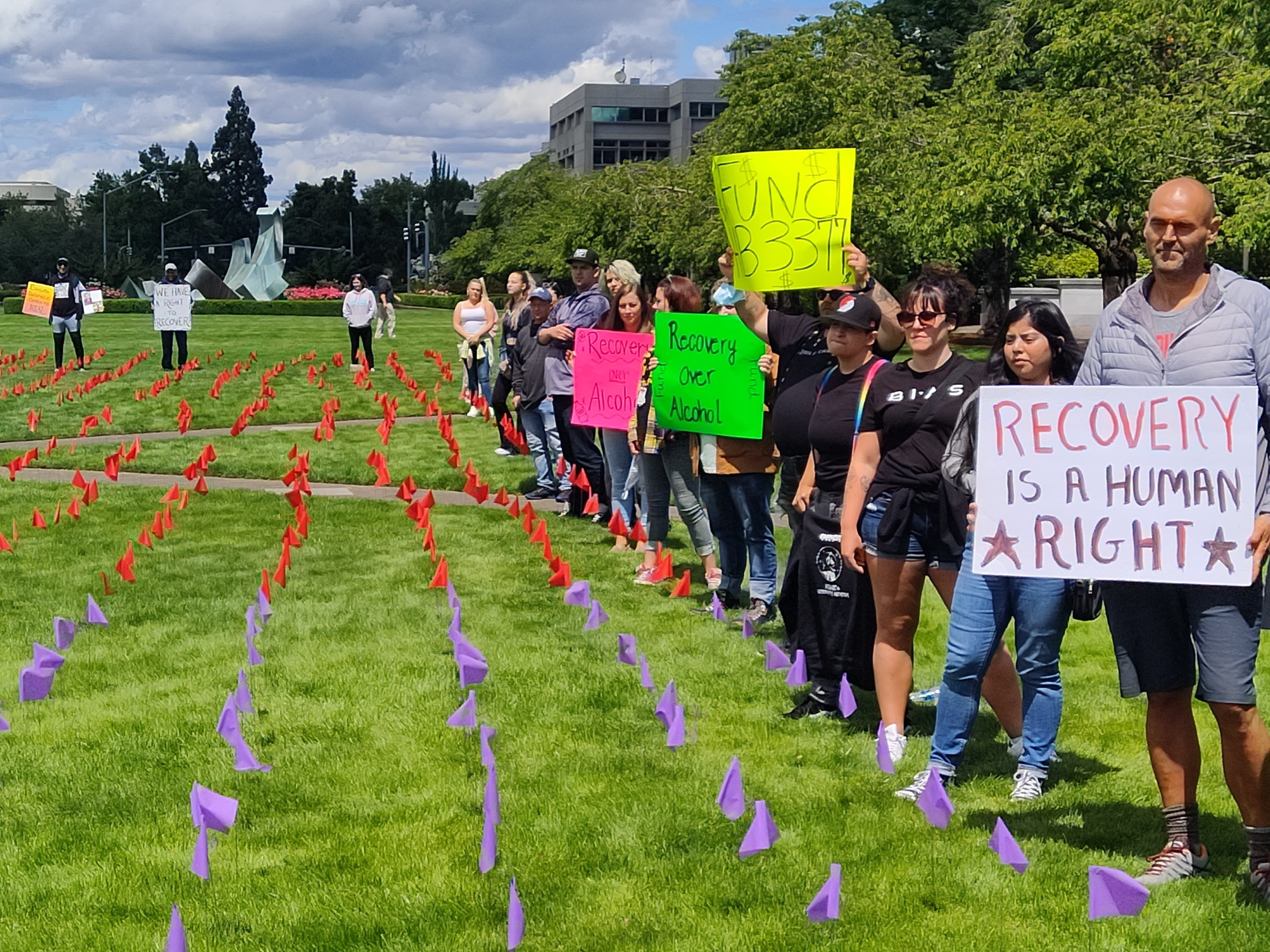 Advocates gather Thursday near the Oregon capitol to support legislation and policy to improve access to addiction recovery treatment. Each of the 1,206 flags represents someone who has died from drugs or alcohol./Ben Botkin/The Lund Report

But three years later, leaders on the commission and other advocates fear Oregon will miss another chance to reform its system. Bills to put the plan into motion remain stalled in the Legislature as the session end-date of June 27 is right around the corner. The bills remain in the joint budget committee, where legislation moves forward -- or dies if lawmakers have other funding priorities.

Recovery advocates and Dr. Reginald Richardson, the executive director of the commission, are alarmed that progress is stalled, especially after a pandemic that has exacerbated the state’s addiction crisis.

Advocates rallied across the street from the state capitol on Thursday. The event drew slightly under 100 people, a reflection of the pandemic rather than the interest in the issue. In 2018, about 1,000 people gathered at the capitol to draw attention to the lack of access to addiction treatment services in Oregon and the state’s high rate of drug and alcohol addiction.

In 2020, the Oregon Drug and Alcohol Policy Commission delivered its 89-page statewide plan to transform Oregon’s system, where people fall through the cracks and often don’t get help until they land in jail or prison.

Richardson gave a stark picture of Oregon as a state that ranks at the bottom or near the bottom by many measures: highest in the nation in the addiction rate for prescription opioid drugs and second-highest for cocaine addiction, among others. Lawmakers must act on stalled bills that are necessary to advance the plan, Richardson said.

For example, House Bill 2313 would direct the Oregon Health Authority to work with the commission to complete a statewide inventory of all services available in Oregon to treat addiction and support people in recovery.

Its estimated pricetag is just $200,000, according to the bill’s fiscal note.

The Legislature is supposed to work for the people, Richardson said, and “right now, they’re not working very well.”

Richardson and other advocates also worry about other stalled bills. These include House Bill 3377, which would create a task force to draft bills for the 2022 session aimed at reducing underage and binge drinking, by raising the price of alcohol.

Another, House Bill 3111, would create a manager of recovery services position in the health authority and create four recovery community centers in different counties outside the Portland metro area. All have been in the Ways and Means Committee since April.

The cost is more than than the marijuana tax revenue the state is receiving for alcohol and drug abuse prevention and treatment services through Ballot Measure 110, which decriminalizes low-level drug possession, the state’s analysis says. That amount is capped at $4.5 million each two-year budget cycle. “The Legislature and the governor charged the Alcohol and Drug Policy Commission to create a comprehensive statewide strategic plan,” Richardson said, adding that this plan includes early intervention and community-based treatment and recovery programs.

Addiction Crisis Not A Priority

“The people in that building have the ability to pass laws that would solve this problem tomorrow,” said Vezina, who is also executive director of 4th Dimension Recovery Centers in Portland and Hillsboro.

The commission’s plan would reduce the number of people who get addicted, Vezina said, standing at a podium with the state capitol in the background.

“Nobody in that building besides (Rep.) Tawna Sanchez is prioritizing that plan,” he said. “I'm not saying legislators are bad people…. I just don’t understand what’s going on.”

Vezina said Oregon needs to look to the future and bring about reforms..

“Where are we going over the next two years?” he said. “I'm working my ass off but feel like I'm hitting a brick wall."

The rally was about more than legislative maneuvers. Attendees remembered those who have died. They set up 1,206 flags in the field across the street from the state capitol building to memorialize each life in Oregon lost to drugs or alcohol since Jan. 1.

The groups heard from mothers who have lost their children to addiction.

Her daughter died at a treatment facility in California -- not Oregon, McInnis said.

“I hugged my daughter and said goodbye to her as she went to a treatment facility in California,” McInnis said. “Katie had to go to California because of the lack of treatment options for alcohol treatment in our state.”

Weeks before her departure, Buckle went with other advocates to lobby lawmakers at the state capitol about the need for more recovery services. Her daughter wanted help, but couldn't get it in Oregon, McInnis said.

“I was awoken from a knock on my front door to be shocked to see a police officer and a chaplain only to receive the news that my daughter had passed away in a treatment facility,” McInnis said. “I should have never had to send my daughter out of state.”

Blake was prescribed opioids after a dirt-bike accident at age 18. At 19 years old, Blake was addicted to heroin. He died of an opioid overdose that put him into a coma.

It’s a condition, Karlowicz said, that “steals the souls of those who are addicted.”

The group also heard from legislators.

“They did not die in vain,” said Sen. Deb Patterson, D-Salem and chair of the Senate Health Care Committee. “You’ll be fighting for others on their behalf.”

Rep. Tawna Sanchez, chair of the House Behavioral Health Committee, said she supports changes, but cannot move legislation forward on her own -- she needs her colleagues in the Legislature.  She also said the alcohol industry is another obstacle.

"I'll be perfectly frank,” Sanchez said. “It is really really hard to move past the alcohol industry in this state."

For example, the alcohol industry testified against House Bill 3377, which would create a task force to examine raising the price of alcohol to curb underage and binge drinking.

The Wine Institute, a group representing 1,000 California wineries and associate members, submitted testimony in opposition, saying the bill would create an “artificial floor” and hurt consumers, including those in low-income communities.

“Problem drinking is not limited to those who can only afford to buy volume brands at lower prices,” the group said in its statement

The Oregon Winegrowers Association also opposed that bill, saying a policy that raises wine prices and taxes in order to lower consumption “will have a profound, negative effect on Oregon’s wine industry, since it is light and moderate wine consumers who overwhelmingly buy our premium products.”

A shortage of care is another issue, advocates said.

Rep. Lisa Reynolds, D-Portland and a pediatrician, said families struggle to find the appropriate care for their children with behavioral health needs.

“Let's try to get this done,” Reynolds said. “Let's get a transformation.”

I am gravely disappointed in the lack of progress in the Legislature on this critical issue. With the exception of a few legisaltors who are passionate about this issue, Republicans and Democrats share the blame on this one.