Measure 97 Floods the State with $8 million in Campaign Cash

Proponents of the tax hike on corporate revenues cite the flurry of underfunded programs that could be greatly improved with $6 billion in increased tax revenues, while opponents cite the possibility of increased food prices and dampered employment as corporations shoulder the new burden.
By:
Chris Gray 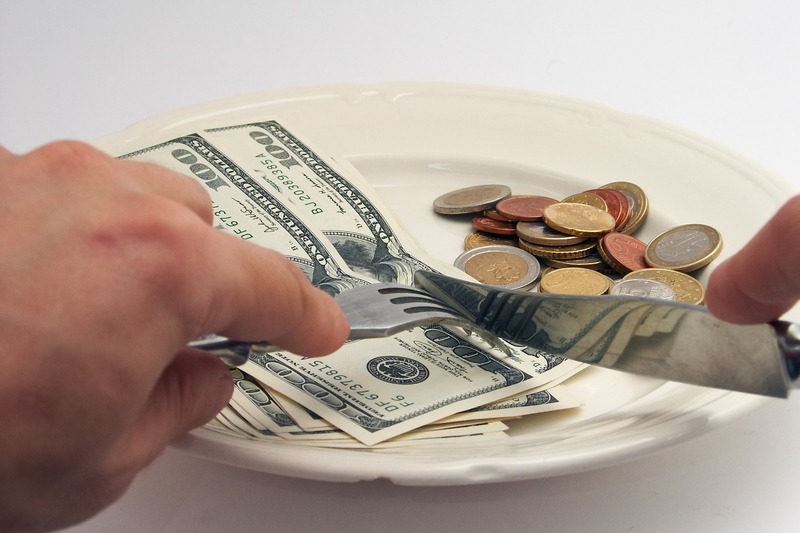 It could bolster Oregon’s lagging schools; shore up the Oregon Health Plan and public health system; and ensure that all Oregon’s children get medical care, all by simply skimming from the top of soaring corporate profits.

Or it could drive up food and utility costs, cramp the ability for large and mid-size companies to do business in Oregon, and stifle employment.

Oregon’s unfettered campaign finance system has produced nearly $8 million to decide the outcome of Measure 97, a corporate gross receipts tax of 2.5 percent on all revenues above $25 million. The measure is expected to raise $6 billion in new revenue.

Oregon Health Forum holds a debate on this ballot measure on October 5, with both proponents and opponents taking the stage.

Alberto Moreno, the leader of the Oregon Latino Health Coalition, said 17,600 children in Oregon have no guaranteed access to healthcare, even as Oregon taxes corporations less than any other state. “I’ve seen firsthand the effects of this exclusion,” Moreno said. “It is my hope that these dollars will help us take care of all of our children.”

Not so fast, counters Dr. Colin Cave, an otolaryngologist who has spoken out against the tax. Oregon corporations, he said, only pay the lowest tax because the state has no sales tax.

In other states, like Washington, with higher gross receipts’ taxes, groceries and utilities are taxed at a lower rate, and Oregon’s poorest residents will face the brunt of Measure 97 -- not its biggest corporations, who will only shift the cost onto consumers or cut jobs. “It’s a regressive tax,” Cave said. “It hurts those who have the least the most.”

Cave also doubted that Moreno and other social service advocates would hold sway in Salem once the shipful of money docks on the Willamette. “Everyone will want that money,” and other special interests have better-paid lobbyists, he said.

Both sides are poised to spend heavily to campaign and advertise their cause to the masses, but the corporate “No” side has outraised the union-backed “Yes” side more than two-to-one: $5.7 million versus $2.2 million.

Interestingly, despite its non-profit status, Cambia Health Solutions is also one of the heaviest contributors to the cause of keeping corporate taxes low -- spending $170,000. That could be a result of its for-profit offshoots run by Chip Terhune, its vice president of business solutions and endeavors. Terhune, along with Cave, Rep. Rob Nosse, and SEIU Local 49 political director Felisa Hagins, is among the speakers at the October Oregon Health Forum.

Some of the other big donors point to potential flaws in the tax measure, with Safeway/Albertsons and Kroger/Fred Meyer each spending $250,000, and even downscale Grocery Outlet chipping in $50,000. Electricity provider Pacific Power has donated $171,000.

Grocery stores operate with notoriously low profit margins. The corporate tax hike in Measure 97 is a tax on revenues -- not corporate profits -- and it makes no exemption for basic needs like electricity and food, the cost of both could go up and even food stamp recipients could be forced to go with less if the tax measure passes.

But Nosse, a Portland Democrat and staunch supporter of Measure 97, said it was unlikely that the big grocery chains would be able or ready to pass on the tax with higher food prices because of high competition. While corporate taxes, including a gross receipts tax like Measure 97, can vary widely by state, grocery prices at the national chains do not.

“They have national pricing strategies,” he said, citing a study from the proponents.

He also said it would be up to the Public Utilities Commission to determine whether Pacific Power or Portland General Electric could pass the tax onto consumers. “The utilities go through a rate-setting process.” .

Nosse also defended the decision to tax revenues rather than profits, noting how clever large corporations are at hiding profits overseas. “A tax on the volume of business is quite common.” .

Moreno noted that Comcast has $8.2 billion in annual, national profit, but some years has paid $0 in income taxes. Comcast, like General Electric, Coca-Cola and Pfizer, has set up offshore accounts to avoid income taxes, according to the United States Public Interest Research Group.

Meanwhile, the benefits of increased state tax revenue could be numerous, filling the hole in the Oregon Health Plan budget, and possibly enriching the healthcare system with investments in public health departments, the Basic Health program to lower costs for the working poor and hiring more school nurses. “We have one of the lowest school nurse to student ratios in the United States. We’d finally have money able to fix that,” Nosse said.

In 2017, the state already faces a $1.4 billion deficit, led by $200 million in increased costs at the Department of Human Services because of increased caseloads, $400 million, which enables the state to share its costs of the Medicaid program, and an $800 million hole to fund public pensions.

The $6 billion that Measure 97 is expected to raise could not only fill those gaps, a Democratic Legislature could act to extend healthcare coverage to all Oregon children, including unauthorized immigrants.

While that program may raise heckles from conservative Republicans, Moreno said California just initiated such a program for its residents and Washington has covered these children as part of its Apple Kids program for years.

The proponents are organized into two political action committees: “Yes on 97” and “Defend Oregon,” and their cash comes almost entirely from unions and their members, most notably SEIU Local 503 and the Oregon Education Association -- the public employee and teacher’s unions, who have each spent $750,000 to back “Yes on 97.”

Smaller but still large union checks are financing Defend Oregon, including $100,000 from Nurses United PAC, $280,000 from the American Federation of Teachers and $100,000 from Oregon AFSCME.

Teachers stand to gain with as many as 8,000 new hires, bolstering the ranks of Oregon’s laggard public education system, which ranks in funding and graduation rates with the Southern schools, and well behind other blue or Northern states.

Public employees could also expect to swell their ranks with flusher state coffers, but perhaps more importantly, a more robust state budget will remove perpetual pressure by Republicans and Democrats alike to cut pensions and the PERS system, which became unsustainable due to bad management in the 1990s.

Correction: Dr. Colin Cave is an otolaryngologist, or ENT -- not an emergency room physician. We regret the error.

While $6 billion would be a robust chunk of revenue, we should probably be taking a closer look out how things have been mismanaged in the past, correct those issues, and show that we can budget correctly with the current revenue, rather than seek ways to find more money to throw at the problem. PERs became unsustainable due to bad management? Then penalize those who managed it and creatre a new program.

Let's take a closer look at how money has been appropriated by the state government, as well, and fix that issue. Anybody remember the not too historic "extra money" being given by Kitz to the buddies he contracted to do work within the state?

Comcast doesn't pay taxes? Sounds like the Federal tax laws need to be reformed before we create state taxation that could drive business to other states.

And why are we seeking ways to pay for the healthcare of "unauthorized immigrants" (intersting how we're refraining from using "illegal" now)? If tehy are not here legally, and aren't paying taxes, then why should we be finding ways to support their medical needs?

I support programs which support the welfare of the community, but this is the type of tax that results in higher cost of living for the general public. Corporations being taxed on their revenue--not just their profit--are going to turn around and raise prices to shore up their profit margins. They'll downscale their business within the state in order to avoid the tax, and national-scale businesses will avoid coming to Oregon--in the same way they avoid manufacturing in the US and instead choose to outsource to China and India because of the higher wages and taxes paid for production in America.

This is a sales tax.  It does

This is a sales tax.  It does not tax profits.  It taxes sales.  All sales that a company makes from Oregon.  It will get passed through to the consumer.  Large Corporations have all kinds of ways to simply divert revenue out of state.  Home grown Oregon Companies that do all or most of their business here have multiple choices.  Pay it if they can.  Pass it on to consumers with higher prices.  Leave the state.  Change to a B-Corporation or go fully non-profit, which also will result in lost property taxes to the local government.  Lastly, they can close up shop.

Some very venerable old names in Oregon business are making their plans right now.  And they are not known for massive profits to out-of-staters.

We have a budget crisis.  We've seen it coming for a long time.  We need to do something to fix it.  But this is not the solution.  It will have unintended consequences that could very well make things worse. Costs will go up.  Businesses that can, will leave.  Those that can't will shed jobs, many of those jobs pay a family wage.  There is a better way.