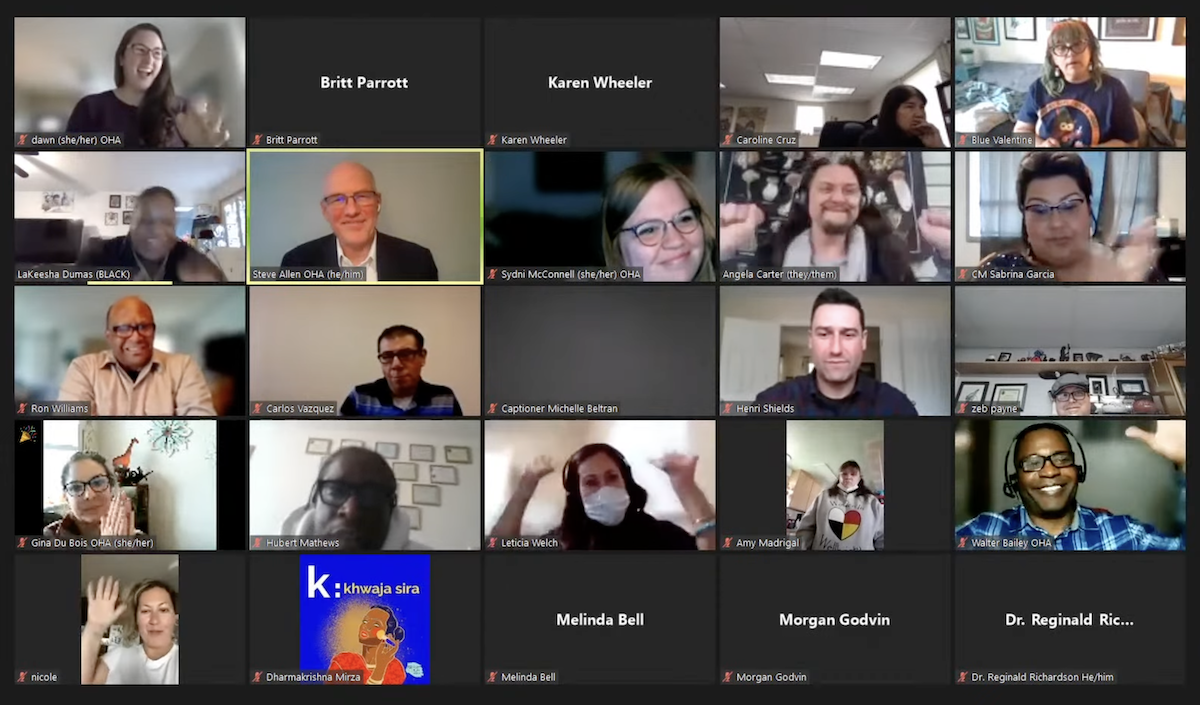 The Measure 110 Oversight and Accountability Council celebrates after voting to approve the first network contract on May 18, 2022./Zoom Screenshot/The Lund Report

The milestone comes one day after the Oregon Secretary of State’s Office sent a letter to Oregon Health Authority calling out “areas of risk” it has so far pinpointed as it conducts an audit of the program’s implementation.

When voters passed Oregon’s landmark drug decriminalization law in November 2020, they diverted about $300 million in marijuana tax dollars to pay for drug and alcohol treatment and recovery services every two years. The bulk of this biennium’s Measure 110 funding, about $276 million, was initially stalled as the inexperienced community council tasked with distributing the funds struggled to design and execute a complicated grant program with little assistance from the state. Then, after more than 130 Oregon Health Authority staff stepped in to take over application reviews, bureaucratic processes further delayed the release of funds.

“There’s been some challenges, and not least of which we’ve certainly made some mistakes as we’ve done this work,” he told the Senate Judiciary and Ballot Measure 110 Committee on June 1. He said the agency “vastly underestimated the complexity” of reinventing the behavioral health system and that the pandemic has placed additional stresses on the agency’s workforce, which led to competing priorities.

This morning, however, the Measure 110 Oversight and Accountability Council voted on the last of 236 applications representing 326 entities across the state during a subcommittee meeting. Now, Oregon Health Authority is negotiating contracts with grant winners, a process that the state estimates will take until late July or early August to complete. After the agency writes up the contracts, the council votes on whether or not to approve them.

“We feel tremendous,” Council Tri-Chair Ron Williams told The Lund Report. “We’re hopeful and optimistic that the county review process will continue on schedule. We plan to have half the counties done within the next couple weeks.”

As of this writing, two contracts totaling about $2.8 million, for Harney and Jefferson counties, were completed and funded. Those contracts, obtained by The Lund Report, offer few details about what the money will be spent on and how. Reporting requirements included in the contracts require tracking of whether people struggling with substance use disorder are able to access services more quickly after the networks receive funding. But it’s unclear how the efficacy of specific programs that receive funding, such as rewards-based programs, will be tracked.

Under the measure, providers applying for funds in different regions of the state, in many cases by county, must jointly form “Behavioral Health Resource Networks.” Each network must provide a range of services that includes needs screening, intervention planning, low-barrier substance use treatment, peer support, housing services, harm reduction and supported employment. And, providers must provide services in a way that aligns with the spirit of Measure 110. For example, services must be culturally competent, inclusive and low barrier. This means that programs can’t eject a patient for a single relapse, and that harm reduction services — such as overdose reversing drugs, fentanyl testing strips and clean syringes — should be available for people who are not ready to abstain from substance use. In some regions, a single provider serves as the entire network.

Grant applicants sought more than $400 million, which is at least $65 million more than is available for distribution. So not all were fully funded, if at all. Providers working together in Harney County requested $4.6 million, but were only allocated $857,711, for instance. Each county’s allocation is based on factors such as the number of people on Medicaid, number of people experiencing homelessness, number of drug overdose deaths and the number of arrests.

Oregon Health Authority was not able to say by press time when tribes will get their set-aside of the funding, which amounts to $11.2 million.

“These decisions are really hard. And you’ve done a great job of making difficult decisions to support your communities,” he said.

While providers, politicians and observers have balked at the length of time it’s taken to get funds out the door, state officials and the oversight council have contended the task at hand has been an arduous one. The number of applications was “unprecedented,” according to Oregon Health Authority, and never before has a community council made up of those harmed most by the war on drugs — including people who’ve been incarcerated and who are in recovery — been tasked with designing and implementing a grant program that doles out hundreds of millions of dollars.

In a letter sent to Oregon Health Authority Director Pat Allen on June 1, state auditors issued a list of recommendations that they said “should mitigate risks that could further delay implementation,” and noted there are “promising signs” that Measure 110 “is back on track.”

Issues pinpointed by auditors through conversations with the council mirrored problems The Lund Report identified in its coverage of Measure 110 starting in February. Their findings and recommendations include:

In its coverage of Measure 110, The Lund Report has often not received clear, timely answers from Oregon Health Authority to questions about numbers, staffing and other aspects of Measure 110 implementation.

Williams, who serves as council tri-chair and is a prominent community organizer in Portland, said the council has learned valuable lessons, such as to ask for expert advice early on in the process and that the health authority needs to play a more strategic role. He expects the next round of Measure 110 grant funding to go smoother, he said.

To what extent access to treatment and recovery services will expand due to the funding will become more clear as contracts are negotiated and money is spent. In the meantime, Williams said he is excited to see the investments being made.

“I’m really excited about the expansion of peers, harm reduction and housing, in particular, because the emergency, supportive, transitional and recovery housing is a tremendous need,” Williams said. “I’m also excited about — there are some proposals that we’ve approved to increase detox and sobering, and there are some proposals that actually make it possible for folks who are categorically ineligible for Medicaid or uninsured to be to get inpatient treatment. So just the whole array of services I’m excited about.”

The council will begin to accept applications for the next round in the fall of 2023.

You can read the state auditor’s letter

The Lund Report is tracking the implementation of Measure 110 as part of a reporting fellowship sponsored by the Association of Health Care Journalists and The Commonwealth Fund. If you have a tip or comment that you think would be helpful, please contact Emily Green at [email protected].