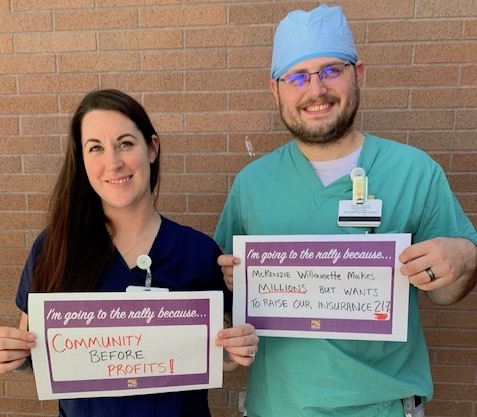 The union, which represents about 400 McKenzie-Willamette workers, said they are protesting inadequate staffing levels, a proposal that workers pay more of the cost of health insurance and what they called management harassment of pro-union employees. Workers also said management is offering inadequate pay raises.

The previous three-year contract expired July 31. It had banned strikes during the term of the contract.

Whether the strike will take place remains uncertain. The sides still have one bargaining session – on Sept. 4 – before the planned walkout. Workers authorized the strike earlier this month.

McKenzie-Willamette officials did not immediately comment on Friday’s strike announcement.

The union said McKenzie-Willamette has the money to be more generous with workers.

The hospital is one of the state’s most profitable. For 2018, it reported a profit of $40.5 million on revenues of $238 million, for a 17 percent profit margin, the highest in the state.

But McKenzie-Willamette is owned by Quorum Health, a for-profit chain of 27 hospitals that is in deep financial trouble. Tennessee-based Quorum reported a $200 million loss on revenues of $2 billion for 2018, and an accumulated $659 million in losses in 2016-18. Seeing the incessant losses, investors have dumped the company’s stock, which has plunged to about $1 a share from highs around $10 just 18 months ago. The company’s low share price and low shareholder equity are out of compliance with New York Stock Exchange standards. The NYSE has given Quorum until late 2020 to come into compliance or be booted from the exchange.

McKenzie-Willamette’s high profits are an anomaly for the company. Many of Quorum’s hospitals – rural facilities in economically lackluster regions – are losing money.

“We want to give our patients the best care possible, and we want to be treated fairly,” said Aaron Green, a certified nursing assistant. “We’re getting ready to strike because we want our hospital to invest in staffing and patient care, and we want to protect against unlawful treatment of employees.”

The union represents a wide range of workers, from pharmacy techs to custodians and housekeepers.

The just-expired contract gave workers solid raises in the form of annual step and cost-of-living increases.

The step increases amounted to 3 percent per step for steps one to eight  , and 3.5 percent per step for steps one to 14. Workers received a step increase each year. In addition, most union-represented job categories received a 2.5 percent cost-of-living increase per year. As a result,  most workers were getting annual raises totaling about 5.5 percent unless they were at the top of the step scale, in which case they typically only received the cost-of-living annual increase.

McKenzie-Willamette is now proposing cost-of-living increases amounting to 2.3 percent a year, said Andrew Barnes, an SEIU negotiator. In comparison, at PeaceHealth Sacred Heart Medical Center at RiverBend, also in Springfield, a just-completed contract with SEIU awards cost-of-living raises of 3 percent, 3 percent and 3.5 percent over three years, Barnes said. The contract also has varying annual step increases, typically about 2.5 percent, but as high as 3.5 percent and as low as zero in some cases.

“Health care workers at McKenzie are upset that such a profitable hospital wants to increase their health care costs,” he said.

Also, the union has filed complaints alleging management has been “spying” on union activists and “trying to prohibit employees from talking about the union at work,” he said.

The hospital employs about 975 people.

Aug 30 2019
News source:
The Lund Report
Keywords:
McKenzie-Willamette Medical Center, labor union, Service Employees International Union
×
This article is for premium subscribers. If you are one, please sign in below.
You can see two more premium stories for free. To subscribe, click here. We depend on premium subscriptions to survive, and they are tax deductible.
Sign InGo Premium Not now