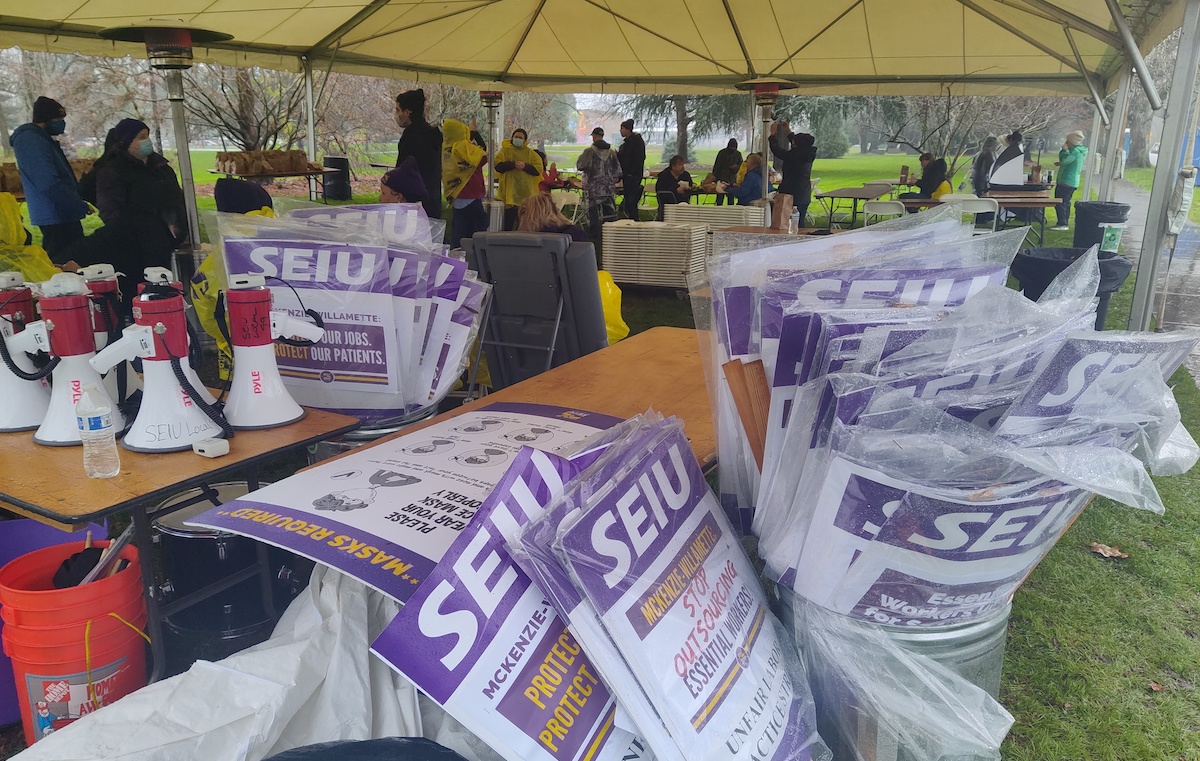 SEIU-affiliated workers of McKenzie-Willamette Medical Center in Springfield staged their picketing from a tent across the street from the hospital on Dec. 6, 2021. The union, which represents more than 420 workers, started a five-day strike that day./Ben Botkin/The Lund Report

More than 300 health care workers at McKenzie-Willamette Medical Center began a five-day strike Monday. It’s the second strike at the Springfield hospital near Eugene since October, when workers represented by the Service Employees International Union Local 49 completed a two-day strike.

SEIU-affiliated workers say the hospital has engaged in unfair labor practices and refused to bargain over the impact of its COVID-19 vaccination policy. Hospital workers continue to see high turnover, understaffing, low pay and a lack of COVID-19 hazard bonuses as they work on the frontline, according to hospital staff who represent the union on the bargaining team.

Health care coverage costs for employees would increase 15% during the next three years under the hospital’s proposal, a bone of contention for employees.

“It’s extremely disappointing that McKenzie-Willamette management continues to ignore our safety concerns and to stonewall bargaining when so much is at stake,” said Aaron Green, a certified nursing assistant and member of the bargaining team, in a statement.

The striking workers say the conditions, including understaffing and high turnover, can put patients at risk and diminish the quality of care. They want a contract with adequate and safe staffing, fair and competitive wages, COVID-19 protections and affordable health care coverage.

In a statement, Jana Waterman, a spokesperson for the hospital, said hospital representatives met “extensively” with SEIU members last week to try to reach an agreement.

“Regrettably, none was reached,” Waterman said. “Compared to the most recent union contract, the hospital offered multiple proposals that include generous wage increases and market adjustments for several positions. The SEIU denied the proposals to increase wages and is conducting a strike this week. This is an unfortunate outcome at any time, but especially during the holiday season and as we continue to manage a challenging public health crisis.”

But hospital workers on strike say the hospital’s latest offer doesn’t offset the shortcomings for employees in pay, benefits and COVID-19 protections.

Other hospitals, Green said, have given people COVID-19-related benefits, including paid time off and appreciation bonuses and retention bonuses.

However, at McKenzie-Willamette, there aren’t “any guarantees around COVID-19 at all,” Green said of the negotiations.

Rachael Gordon, a certified nursing assistant and member of the bargaining team, said the hospital’s proposed wage increase “was not enough to keep up with inflation.”

The union represents about 420 workers at the hospital and about three-quarters of them went on strike. Overall, the hospital has about 1,000 employees.

Waterman said the hospital has put its contingency plan in place, including extra staffing and hospital operations will continue without interruption for all inpatient, outpatient and emergency services.

Dec 7 2021
News source:
The Lund Report
Keywords:
SEIU 49, McKenzie Willamette Medical Center
×
This article is for premium subscribers. If you are one, please sign in below.
You can see two more premium stories for free. To subscribe, click here. We depend on premium subscriptions to survive, and they are tax deductible.
Sign InGo Premium Not now