Families gathered at the Idaho Capitol building on Saturday burn masks at a protest over COVID-19 restrictions. Sergio Olmos OPB.jpg 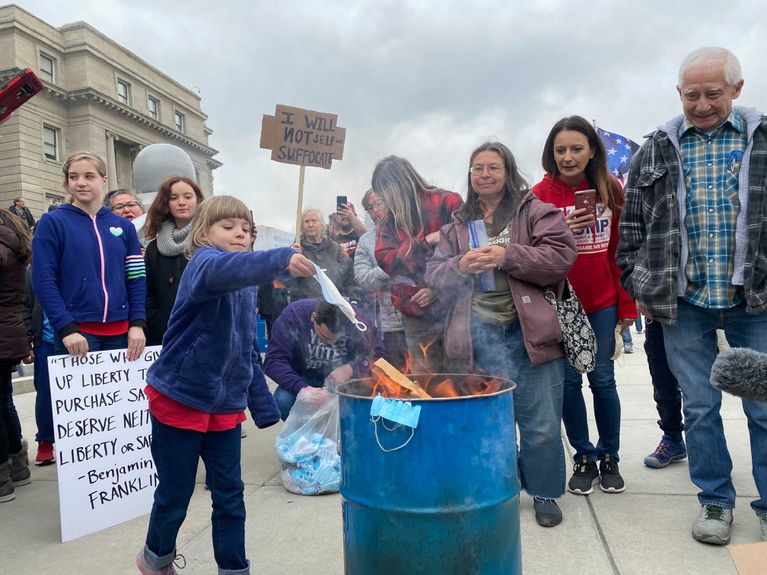 Families gather outside the Idaho Capitol building on Saturday to protest over COVID-19 restrictions./Sergio Olmos/OPB

The protest event was promoted by the People’s Rights Network, a far-right catchall group organized by Ammon Bundy.

Parents cheered Saturday on the steps of the Idaho Capitol building as children threw handfuls of surgical masks into a fire. Far-right groups and some lawmakers held similar demonstrations in more than 20 Idaho towns, seizing on growing impatience with COVID-19 restrictions.

“Hey fire, you hungry?” asked one boy as adults watched him toss face coverings into a burn barrel. “Here’s another mask!”

Idaho Lt. Gov. Janice McGeachin and state Rep. Dorothy Moon addressed the crowd of more than 100 people, standing behind a lectern on the Capitol steps. Nearby, a banner with the racist phrase “Wu Flu” was draped over a replica Liberty Bell.

“We’ve got people in groups from Bonners Ferry ... all the way to Pocatello,” said Darr Moon, one of the organizers and husband of Moon. “It’s a widespread grassroots movement, an uprising in that regard.”

The extent of the “movement” looking to undermine COVID-19 health protocols is likely less far-reaching than the rally organizers hope, but it may pose challenges in the months ahead for neighboring states like Oregon, where stricter health and business guidelines are likely to remain in place until large swaths of the public become vaccinated.

Idaho is one of 16 states that have not implemented a statewide mask mandate. Still, some cities in the state like Boise, where Saturday’s rally was held, have emergency orders requiring face masks and social distancing.

Saturday’s rally fits with recent actions by Republican-controlled states across the country, including Texas, Mississippi, Alabama and West Virginia, which have gone as far as announcing plans to loosen or repeal COVID-19 restrictions entirely.

Idaho leads the Pacific Northwest in COVID-19 cases and death count per 100,000 residents. In the Gem State, people are dying at almost twice the rate of Oregonians, according to data from Johns Hopkins University.

That pattern isn’t universal with border counties in the states, however, as people in the region regularly travel. For example, Idaho’s sparsely-populated Payette County has a much lower case count than Malheur while Oregon’s Baker County far outstrips it. But health officials are concerned lax health safety measures in one area could drive up case counts elsewhere.

In response to recent moves to scale back or end coronavirus restrictions, U.S. Centers for Diseases Control and Prevention Director Dr. Rochelle Walensky warned that “now is not the time to stop wearing a mask.”

She said that while rates are falling since the start of the pandemic, “we cannot be resigned to 70,000 cases a day, 2,000 daily deaths.”

Oregon’s efforts at containing the coronavirus have come at a great cost to the state’s economy, but those restrictions on businesses and social gatherings have curtailed the spread of the virus. Oregon has among the lowest infection and death rates in the country.

Still, some businesses along the border have felt the firsthand effects of Idaho’s more open business policies during the pandemic.

Ashton Chuck runs the board game store ProSoul in Ontario, on the Oregon-Idaho border. Chuck said half of his businesses involve customers coming into the store to play board games, a part of his revenue that has disappeared.

“Some of our players drive regularly to Idaho because of the restrictions we have here,” Chuck said.

While Chuck said he’s happy to comply with whatever mandates health officials feel are necessary, he knows his customers will continue to cross the border until Oregon can safely return to indoor activities.

“Try playing a board game with six feet of distance,” he said.

Some counties in Eastern Oregon have already expressed concerns that social gatherings in Idaho could mean more cases on their side of the border, a fact that could prolong state-mandated restrictions.

If an Oregon county’s infection rates rise too high, they risk entering into the “high” or “extreme risk” categories. The state reevaluates those categories for each county every two weeks, but for businesses like Chuck’s, a two-week wait to reopen can significantly hurt his revenue.

He said he’s among the people who are tired of wearing masks and enduring business restrictions, but he added he still adheres to health guidelines.

He’s seen Idahoans often travel into Malheur County for work, to visit businesses like the local Walmart, or just to buy recreational cannabis, which is legal in Oregon but illegal in Idaho. He has concerns that if Idaho residents abandon health safety guidelines, it could hurt people in Malheur County.

Melendrez saw videos of the mask burning rally on Facebook, which he called “crazy.”

“Some people have got a little taste of what it’s like to have rules put on them,” he said, “something Black and brown people have had to deal with their whole lives.”

A Recruiting Group For The Far Right

Saturday’s rally in Boise was organized by Darr Moon, but it was most widely promoted by the People’s Rights Network, a far-right group that brings together various militias, conspiracy theorists and anti-government activists. The group claims to have tens of thousands of members and was founded by Ammon Bundy, who has participated in two high-profile armed standoffs with the federal government in the West.

The family-friendly atmosphere at the Boise rally — with laughing children doing much of the mask burning — points to another contagion that has been increasingly spreading among mainstream conservatives: the once-fringe anti-government views of activists like Bundy.

“We started People’s Rights about a year ago. Forty people met in a warehouse and now there’s 50,000 of us nationwide,” said Lee Joe, an area assistant with People’s Rights Idaho.

Devin Burghart, executive director at the Institute for Research and Education on Human Rights, said the People’s Rights Network is designed to operate in a less obvious way than Bundy’s previous armed standoffs.

“They operate in kind of an old-school network of using text messages and personal communications to build out this network. So if you’re not a part of it, you would almost never know what’s happening,” Burghart said.

The People’s Rights Network has chapters in many western states, including Oregon and Washington. Members of the group sign up and then report to an area leader.

Nick Ramlow, a member of the Montana chapter, described the group in a video posted online as an “Uber-like protective service.” Essentially, if one group calls for help, people from other parts of a state can show up to oppose the government.

“The purpose of People’s Rights is to look out for and defend your neighbor, period,” said Joe, the Boise member. “Whether it’s against a mob or police brutality or government overreach.”

People’s Rights groups have already used the threat of force to defy health policies during the pandemic, from armed guards at restaurants defying COVID-19 closures to protests at hospitals asking people to wear a mask.

“Ammon Bundy with People’s Rights has created a situation where we could have hundreds of little Malhuers for years going forward,” said Burghart, referring to the 2016 armed standoff at the Malheur National Wildlife Refuge in Oregon.

While only the most extreme anti-government activists may be willing to carry a rifle and take over a federal bird refuge, protests like the mask burning events in Idaho offer a more tempered entrance to far-right politics. They also exploit exhaustion some Northwest residents have with health protocols that have dramatically changed life for more than a year.

“Ultimately their goal is to try to carve out pockets in this country that are essentially lawless, where they get to control the situation through force of arms and through force of will, rather than using the democratic process to enact legislation or policies,” Burghart said.

No mask burning rallies have been planned in Oregon or Washington at this time, but members of People’s Rights said Saturday they hope that will change.

This story was originally published by Oregon Public Broadcasting and is posted here through a content-sharing arrangement among Northwest media outlets.