Mary Julia Klimenko thought she was prudent 20 years ago when she invested in a long-term care insurance policy, one she believed would help pay for the care she’d need as she aged.

Now she wishes she’d banked the money instead.

Her monthly premiums have nearly quadrupled over the past two years, and Klimenko, now 69, is furious about the choices she’s been given: pay the higher cost, lower her premiums by cutting her policy’s benefits or drop the insurance altogether.

For now, the Vallejo, California therapist said she will pay the higher premiums, but she’s not sure how many more price hikes she can take.

“I have no choice. If I drop my insurance, I’ve thrown away all that money,” Klimenko said. “If I pay less, they’re not going to cover what I need.”

Long-term care insurance was supposed to help the middle class ease the financial burden of expensive in-home or nursing home care that now can top $90,000 a year.

Consumers were urged to buy policies in their 50s, because premiums rose the longer they waited. About 4.8 million people were covered by long-term care policies in 2014.

But insurers botched just about every aspect of the policies they sold in the early days of the industry, said Joseph Belth, a retired professor of insurance at Indiana University known as one of the insurance industry’s toughest critics. They underestimated how long people would live and how long they’d need nursing home care — but overestimated how many people would drop their policies and how much interest insurers could earn on the premiums they banked.

Hemorrhaging money, many insurers left the business. Those that remain are in financial trouble on their long-term care policies. They’re charging far more for new policies, and sharply raising the premiums of old ones.

“The industry is a state of severe decline,” Belth said. “Companies … don’t see a way to successfully market the product and make money on it.”

As a result, many seniors nationwide face the same unpleasant choices as Klimenko: paying rising costs, scaling back coverage or dropping it altogether.

New Yorkers who bought long-term care insurance from Genworth Financial Inc., one of the few remaining carriers, were hit with a 60 percent premium increase in October. The same company has asked Pennsylvania state regulators for permission to raise premiums by as much as 130 percent for some policyholders.

In California, an estimated 133,000 residents who bought long-term care policies from CALPERS, the state workers’ retirement plan, have seen their premiums rise by 85 percent over two years. A 2013 lawsuit retirees filed against CALPERS was granted class-action status in February.

Rising costs could be prompting many seniors to drop their policies, according to a study from Boston College’s Center for Retirement Research. Published in October, it found that about a third of people with long-term care insurance at age 65 let their policies lapse, often just a short time before needing care. While some seniors had memory problems that kept them from paying their premiums, others dropped their policies because they believed they could no longer afford them, the researchers found.

Rather, it typically pays only for short stays in a skilled nursing or rehabilitation facility to recover after a hospitalization. In contrast, long-term care insurance will pay for what’s known as “custodial care” — help with eating, dressing, walking, bathing and other daily activities, either at home, at a skilled nursing facility or assisted living facility.

Medicaid, the nation’s health program for the poor and disabled, will pay for long-term care — but it requires seniors to spend nearly all their assets beforehand. These days, nearly half of all long-term care in the United States is paid for by Medicaid — a huge burden that is only going to grow as millions of baby boomers reach their 80s.

Policymakers and aging experts had long hoped that long-term care insurance might ease that burden. About 70 percent of Americans who reach age 65 will likely need some type of long-term care before they die, according to federal estimates.

But premiums for new long-term care insurance policies have risen so high they’re out of reach for the middle class, said Bonnie Burns, a policy specialist with consumer group California Health Advocates and a nationally-recognized expert on Medicare and long-term care insurance. Yearly premiums for insurance with inflation protection can be as high as $4,406 for a 55-year-old woman and $2,309 for a man of the same age, according to the American Association for Long-Term Care Insurance, which represents insurance brokers. Women’s premiums are higher because they live longer and are more likely to require long-term care. 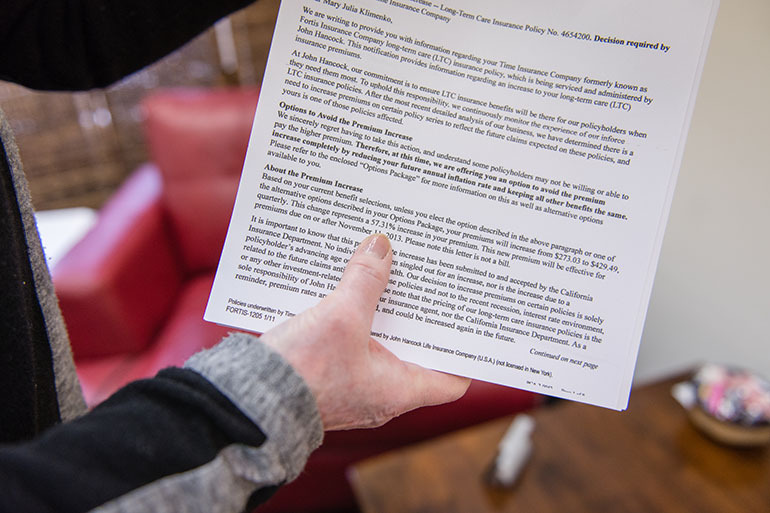 [Mary Julia Klimenko, 69, points to the 57 percent increase in her long-term care insurance policy monthly premium. For now, the Vallejo, Calif. therapist will pay the higher cost, but she’s not sure how many more premium hikes she can take. ”I have no choice. If I drop my insurance, I’ve thrown away all that money. If I pay less, they’re not going to cover what I need,” she said. (Heidi de Marco/KHN)]

Klimenko points to the 57 percent increase in her long-term care insurance policy monthly premium. For now, the Vallejo, California therapist will pay the higher cost, but she’s not sure how many more premium hikes she can take. (Heidi de Marco/KHN)

California is one of many states that created public-private partnerships in the 1990s to encourage more people to buy long-term care insurance and reduce state tax burdens. The partnerships set standards for the policies and helped market them to consumers. But in California, partnership policy sales have dropped to between 500 to 800 per quarter because of price hikes. That’s compared to tens of thousands of policies per quarter when the partnership started, said Rebecca Schupp, director of the California Department of Health Care Services’ Long Term Care Division.

Burns said that as interest rates go up, companies will have actually overpriced new policies to avoid future losses like the ones they sustained on previous policies.

“This is really a vexing issue for the country,” she said.

How We Got Here

When the first long-term care policies came on the market in the mid-1970s, insurers based their projections for premium costs and payouts on life insurance data. They told consumers that premiums would rise minimally, if at all, over the life of their policy.

But people lived longer and health care costs grew faster than the insurers ever expected. Seniors who bought low-priced policies in the 1980s and 1990s lived for years with chronic and expensive-to-manage conditions like Alzheimer’s disease or Parkinson’s disease. Worst of all, low interest rates meant that insurers earned very little on the premiums they collected — money they’d need to pay future claims.

Genworth has lost $2 billion on its long-term care policies overall and continues to lose between $100 and $150 million each year, he said in an interview.

About 85 percent of the company’s long-term care policyholders who’ve received premium hikes have decided to pay them, while another 9 percent chose to cut their benefits to keep their premiums the same. About 6 percent opted to drop their policies, although Genworth will pay claims up to the amount of premiums already paid, so consumers won’t lose everything they’ve paid, McInerney said.

Fewer people today are buying traditional long-term care insurance policies, which only adds to insurers’ financial woes. Some are considering newer “hybrid” products such as life insurance or annuities that provide a long-term care benefit, but they’re also expensive and some require a large up-front payment.

That’s why pressure is mounting for state and federal lawmakers to come up with ways to finance long-term care for millions of aging baby boomers. Policy proposals abound, such as requiring people to buy subsidized long-term care insurance, much as they now need to buy health insurance. Other ideas include creating a government-run catastrophic plan or allowing people to convert their life insurance policies to long-term care policies. But all of these would require legislative action, and lawmakers at the state and federal level have been slow to act because of the sheer scope of financing Americans’ long-term care.

In the meantime, McInerney and other long-term care insurance leaders are trying to change the way consumers see their private sector product: as catastrophic insurance with more limited benefits and consistently rising premiums, rather than as a way to pay for all of their long-term care.

“No one likes premium increases, but they do understand, in the end, why they’re needed,” McInerney said. “We certainly can’t lose billions of dollars and have consumers expect us to pay claims.”

But Klimenko, who is struggling to pay the higher premiums for her own long-term care policy (which is not a Genworth product), expected exactly that. It’s what she paid for, for 20 years.

“The insurance salesman who came to my home told me that if I took out the policy, that when I was old and got sick, I’d be taken care of,” Klimenko said. “Now that I’ve lived so long, none of that is true.”