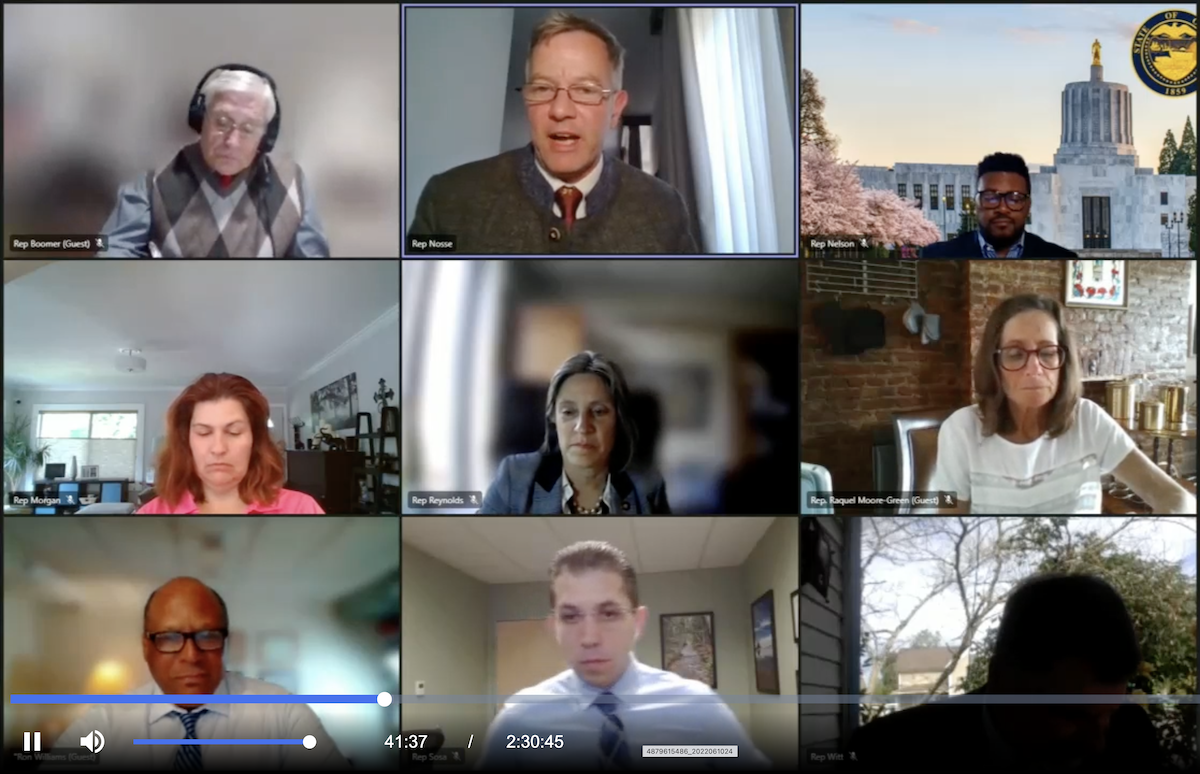 Rep. Rob Nosse, shown at a meeting of the Interim House Committee on Behavioral Health in June, has been tapped to head the Committee on Health Care — which could take on an expanded role next year if the two committees are merged.

In the next few weeks Oregonians will learn the outcome of a behind-the-scenes discussion between Speaker Dan Rayfield and Rep. Rob Nosse, D-Portland, over how the Oregon House of Representatives will handle behavioral health issues in 2023.

In July, Nosse told The Lund Report that Rayfield was considering merging the House Behavioral Health Committee—which Nosse chaired during the last session and in the interim — into the House Committee on Health Care, which Nosse is expected to chair next year.

Nosse said that if that happens, he hoped to add a fourth day of meetings each week to the Health Care Committee’s schedule just to focus on behavioral health, saying that “otherwise I think the topic gets lost.”

In a recent conversation with The Lund Report, he said the future of the House Committee on Behavioral Health is technically not decided — and so is the possibility of a fourth day of hearings. But he is expecting the committee will, indeed, go away.

A spokesperson for Rayfield said in an email that final decisions about committees and their makeup would be made after the dust settled from the elections. “No decisions will be made on committee assignments and structure until the Speaker has the chance to have discussions with all House members and received feedback from the House Republican leader. I would not expect those decisions to be made until mid-to-late December,” Rayfield’s communications director, Danny Moran wrote.

The proposal to eliminate the behavioral committee comes as national data shows that Oregon has a higher prevalence of behavioral health problems than most other states, but less access to care. The Fentanyl crisis, the spread of potent low-cost meth and its effect on health care, problems at the Oregon State Hospital, all are raging. The Legislature authorized the spending of $1.35 billion in the last two years to address the behavioral health system’s long-standing weaknesses, and some advocates say it requires legislative oversight to ensure that spending is effective. Meanwhile, the House will have a slew of new members, potentially adding to the challenge of processing thousands of bills.

Nosse went into more detail about his discussions with Rayfield at a panel discussion on behavioral health held at the Oct. 25 Oregon State of Reform Health Policy Conference. There, one attendee asked Nosse, who was a panel speaker, if Rayfield was going to dissolve the committee.

Nosse responded, “I think so. I keep trying to tell the speaker to keep it, but I keep losing.”

“There is some concern if (the committee) dissolves, then are we taking our eye off the ball in terms of behavioral health?” an attendee asked Nosse.

Giving House Health Care a fourth day for meetings to focus on behavioral health would be an unprecedented move, according to Nosse, since most committee chairs only get two or three days a week for committee meetings.

“I’m hopeful that the Speaker will give me an extra day,” Nosse said at the State of Reform conference.

Nosse told the Lund Report he understands why Rayfield is considering the merger.

“In fairness to him, he's just concerned about attention and time. Too many committees makes it difficult to operate the House,” Nosse said. Also, he said, “the physical space in the building might not accommodate as many committee meetings during normal work hours as we had during virtual.”

Even if the committees are merged, Rayfield’s spokesperson said that behavioral health would remain a priority for the House.

“Speaker Rayfield views behavioral health as a top priority for the 2023 session,” Moran wrote. “Specifically, he will be focused on providing oversight to ensure the successful implementation of the more than $1.35 billion in funding the legislature allocated for this biennium to transform Oregon’s behavioral health system.”

Kevin Fitts of the Oregon Mental Health Consumers Association shares the concerns expressed at State of Reform, saying of behavioral health advocates, “we get lost in the shuffle … And sometimes having significant focus just on behavioral health is crucial. I like Rob, but I don't know where they're going to find the time to have one other session a week.”

Chris Bouneff, executive director of the Oregon chapter of the National Alliance of Mental Illness, was more sanguine. “We're not overly concerned as long as Rep. Nosse chairs House Health Care. He knows the issues and will make them a priority. What's nice about having a behavioral health committee is the sole focus such a committee brings to our issues. In a general health care committee, behavioral health can get drowned out given the magnitude of issues that fall under health care,” Bouneff said. “It would be nice and probably much more efficient for the House to retain a Behavioral Health Committee or to at least have a subcommittee of House Health Care. That way there is a space for the longer and more detailed discussions that will be necessary to make dramatic improvements.”

Nosse told The Lund Report that he has suggested that if the two committees are merged, the product be called the ‘“Health Care/Behavioral Health Committee.”’

Whatever happens, he said, he’s increasingly  optimistic that behavioral health will have the focus it needs.

“I'm in a better mood than I was,” he said. “I would prefer a committee focused on it. But if I get a healthcare committee with an expanded focus, and more time, I'll be fine.”

Aurora Biggers can be reached on Twitter at @aurorabiggers.