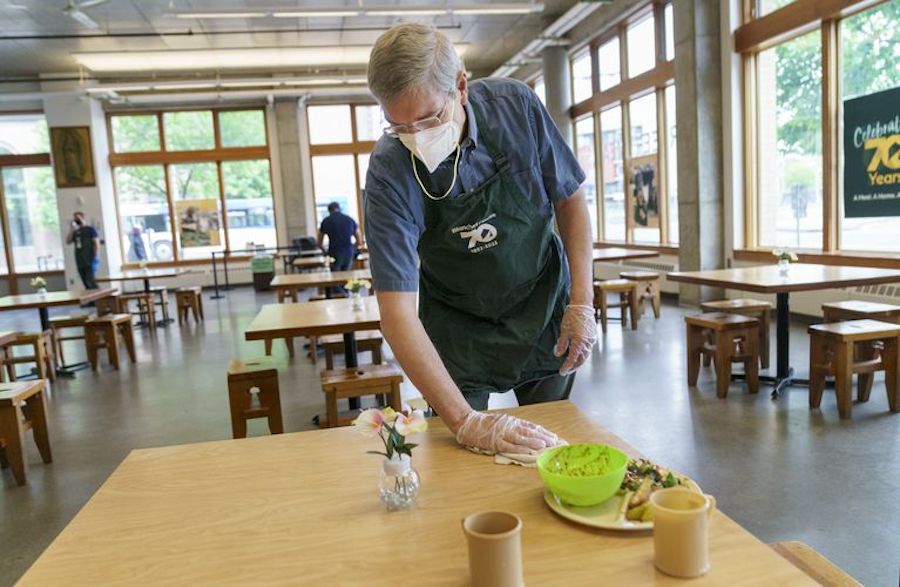 Volunteer Jim Jackson of Portland cleans tables on May 2, 2022, as Blanchet House reopened for indoor dining following more than two years of closure due to the pandemic./Kristyna Wentz-Graff/OPB

With masks coming off and highly transmissible subvariants of omicron circulating, people who’ve made it through the pandemic without getting SARS-CoV-2 are suddenly getting it.

People who’ve had it already are getting it again.

It’s unfolding in a radically changed world, where most of our immune systems have some antibodies, from vaccines or previous infection, to deploy against the virus.

That’s curbing the virus’ terrors, if not its spread.

At the peak of the delta wave last summer, there were 197 COVID-19 patients on life support in Oregon. Last week, there were fewer than 10.

OPB took its questions about the current wave and what it says about the long-term trajectory of the pandemic to Bill Messer, an expert in viral evolution and a clinician who cares for COVID-19 patients at OHSU.

Here are his observations about what COVID-19 is doing now, and where the pandemic is headed.

1. Things are getting better.

The number of reported cases is way up, close to the peak during the delta wave last summer.

But the number of deaths and hospitalizations remains comparatively low.

And that makes sense. There are more cases in people with some degree of protection from vaccines or previous infection, and the omicron variant is less virulent than delta.

“It may be that it becomes a seasonal respiratory virus but that it won’t carry with it the same horrific, devastating impact on our health care infrastructure going forward that it did early in the pandemic,” Messer said.

“We’re seeing more and more evidence to suggest that that is indeed a likely pattern.”

Messer cautions, however, that it’s too soon to say for sure if the health effects of COVID will continue to lessen, and there are multiple evolutionary paths the virus can take from here.

2. The omicron variants are super contagious.

We may be approaching the limit of how much more contagious the coronavirus can get.

One of the major ways variants gain an evolutionary advantage is if they have mutations that make them more transmissible.

Each dominant variant of the COVID-19 virus has been more transmissible than the one it replaced.

You can see that looking at how the virus’ reproduction number, R0, has changed. The number measures how many new people each person with the virus infects, absent interventions like masking or vaccines.

The ancestral strain of SARS-CoV-2 had an R0 of between 2 and 3. That R0 increased to around 6 for the delta variant. The R0 is around 12 for the omicron subvariants circulating now.

That makes the novel coronavirus already one of the most contagious viruses ever, on par with chicken pox, but not quite as contagious as the measles.

Messer suspects SARS-CoV-2 is reaching the limit of how much more contagious it can get.

“The number of new cases that arise from a single case cannot continue to rise infinitely,” he said. “It’s going to plateau somewhere.”

That hard limit is due to physical realities, like how many people we can come into contact with while infectious, or how much we can sneeze.

There’s always room for incremental increases, but Messer is not expecting another huge leap in contagiousness.

3. The current variants are better at reinfecting us.

One of the most intriguing aspects of the omicron subvariants is their capacity for immune evasion: the ability to reinfect people who’ve been infected with other COVID-19 variants and to cause breakthrough infections in vaccinated people.

There are likely a couple of reasons for this. First, research has shown that our immunity to COVID-19 wanes relatively quickly.

And evolution favors variants with mutations that help the virus evade our immune response.

Messer believes that going forward, we will likely see new variants that are better at reinfecting us.

Interestingly, this ability to cause repeat infections relatively frequently is a trait SARS-CoV-2 appears to share with other important coronaviruses: the four viruses that cause the common cold.

Messer said researchers recently learned that People are reinfected with cold viruses about once every 30 months, with evidence that some people can experience multiple infections from the same cold virus within six months or less.

Some of those repeat infections may be too mild to cause symptoms.

Messer believes it’s reasonable to think a similar pattern may emerge with COVID-19, where people get short-term immunity from infection or vaccination, but a vaccine that confers five-year immunity is off the table.

4. How sick you’ll get with each infection is a key unknown.

While vaccination and prior infection won’t completely protect you from COVID-19, you do retain some antibodies that can mount a response to future infections.

Even waning antibodies offer decent protection against the most severe outcomes, like hospitalization and death.

But long-term antibody protection may wane over time, and reinfections are still causing relatively serious symptoms for many people, Messer said.

In terms of its ability to disrupt our lives and cause pain, there’s still a huge difference between catching a seasonal COVID-19 variant once a year and a seasonal cold.

Messer said it’s hard to know why. It could be that SARS-CoV-2 is just a little different, and nastier, than the common cold coronaviruses.

Or, it could appear nastier because it’s still very early days in this pandemic, from an evolutionary point of view.

We don’t know how long the four viruses that cause the common cold have been circulating, or if they also appeared more virulent at first.

There is one intriguing set of clues, however.

Some scientists believe they have pinpointed how and when one of the four common cold viruses, human coronavirus OC43, was introduced.

If they’re right, it’s a scenario with many echoes of the current pandemic.

The researchers have hypothesized that OC43 leaped from cattle to humans about 130 years ago.

It may have been the cause of a well-documented global respiratory pandemic that killed more than 1 million people from 1889 to 1891.

If that hypothesis is correct, Messer said, it strengthens the argument that over some period of years and many repeat infections, SARS-CoV-2 will become a less terrible virus.

“The counterargument is the virus is really agnostic about how virulent it is, it really just wants to be transmissible and survive from host to host,” he said.

5. Reformulating vaccines will be tricky

The vaccine most of us have received was formulated to protect against the first COVID-19 virus we encountered. While it’s still providing protection against the worst outcomes of infection, it’s not a great fit for the omicron subvariants.

Pfizer and Moderna are developing an omicron variant vaccine, but those efforts are moving slowly.

The bigger problem is whether a new vaccine will earn or lose money for its maker.

Vaccine makers need to see that the public is willing to get an updated version of the COVID-19 vaccine to make it worth investing in it, Messer said.

That may depend in part on how mild, or severe, breakthrough infections are for people who’ve already been vaccinated.

In addition, vaccine makers will need to bet that the omicron variants will still be the dominant branch of the COVID-19 family tree when a vaccine is ready to get into arms. The virus’ rapid evolution makes that uncertain.

“I don’t see the clear path forward to the investment in rolling out the next variant vaccine paying off. That’s a cynical way of looking at it,” Messer said.

6. One simple takeaway: Get your booster.

Messer has yet to catch COVID-19 himself. Part luck, part care, part the privilege of working in a place with masking and good hand hygiene.

He said people like him who are vaccinated but haven’t been infected are likely pretty susceptible to getting COVID-19.

The data is clear that antibodies you get from vaccination wane relatively quickly. And that is a reason, according to Messer, to follow his advice.