Even as Democratic lawmakers celebrate new laws providing healthcare to immigrant kids and raising the age of purchasing tobacco, a continued fight over the provider tax dampens enthusiasm over the 2017 session.
By:
Chris Gray 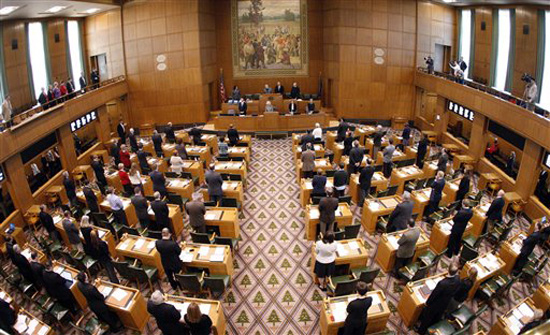 The Oregon Legislature passed sweeping legislation around reproductive health, tobacco prevention and drug sentencing reform, but other priorities, such as protecting the state’s investment in Medicaid, protecting the environment and ensuring that hospitals deserve their tax-exempt status sputtered, as Oregon’s system of unlimited campaign finance was laid bare.

In conversations with The Lund Report, legislators discussed their highs and lows of the 2017 session.

Rep. Mitch Greenlick, D-Portland, was among the most dour of legislators, blaming lobbyists backed with big money at the Coalition for a Healthy Oregon, the Oregon Association of Hospitals and Health Systems and SEIU for killing his most important bills.

“That covers my view of things,” said Greenlick.

While Greenlick could likely have gotten his bills through the Oregon House of Representatives, the state’s Senate is more aligned with big money, and at any given time a rotating list of several so-called moderate Democrats will kill progressive legislation if it butts up against their sources of campaign finance.

Most of these “moderates” are in safe Democratic seats, but the flow of money to their campaigns deters progressive challengers.

COHO and several other Medicaid-related healthcare organizations have spent nearly $6 million since 2010 to get their way in the Legislature, including the successful effort to defeat House Bill 2122.

HB 2122 would have prevented COHO’s members from capitalizing on Medicaid profits and selling Oregon Health Plan-funded organizations to corporate interests. Without HB 2122, it’s likely that some physicians represented by COHO will become millionaires off the profits they can earn from tax funds designated toward caring for the poor. The bill also attempted to open up the coordinated care organizations to public scrutiny and greater community involvement.

Greenlick, the House Health chairman, blamed SEIU more than the hospitals for killing his bill that would have required hospitals to spend 6 percent of their revenue on charity care, beyond a 2 percent operating margin.

He said SEIU opposed a 2 percent cushion, but eliminating it was a non-starter for the hospitals. SEIU had backed a bill that required hospital systems like Providence Health & Services and Salem Health to pay property taxes on their outpatient clinics, which Kaiser Permanente already does. When that bill faltered, Greenlick said SEIU rolled the policy into his bill, and required clinic profits to be included in the charity care formula.

Greenlick said he supported taxing the clinics but that including them in the charity care formula was a poison pill because the clinics are the bigger moneymakers for hospital systems and it would force these health systems to spend more on charity care even if they were losing money on the hospitals attached to those clinics.

Greenlick was still happy to see a $5 million boost in funding for public health, as well as the passage of the women’s comprehensive health bill and the Tobacco 21 bill, which raises the sale of tobacco to 21, while keeping possession at 18. He was also glad that Sen. Jeff Kruse, R-Roseburg, joined Democrats to pass legislation to provide health insurance to immigrant children.

Rep. Alissa Keny-Guyer, D-Portland, had one of the most successful sessions, passing three of her four environmental health priority bills as well as shepherding through the health bill for immigrant children, which gives about 18,000 undocumented children coverage under the Oregon Health Plan.

“I don’t think we’ll ever close disparities for any racial or ethnic group unless we provide healthcare,” Keny-Guyer said.

Public schools will receive help mitigating for lead and the Oregon Health Authority will help school districts look out for other health hazards. She also sponsored a bill that will help mitigate for asbestos and lead as houses are torn down. And she won $250,000 in funding to help people of modest means replace their old wood stoves with cleaner sources of heat.

But she lost the battle this year on House Bill 3105, which would have assessed fees on manufacturers and suppliers of household cleaning products to help consumers defray the cost of disposal.

Industry also gutted the dirty diesel bill and scuttled the Cleaner Air Oregon program by depriving it of a fee bill that would have funded the work of the Department of Environmental Quality to analyze the source of air pollution.

Keny-Guyer singled out Sen. Rod Monroe, D-Portland, and Sen. Betsy Johnson, D-Scappoose, as well as the Senate Republicans, for their  refusal to compromise on House Bill 2004, which would have ended no-cause evictions and required landlords to give a reason for forcing a tenant to move. “There’s nothing to protect people when they get notice of an eviction,” corroding a key social determinant of health, she said.

Rep. Rob Nosse, D-Portland, failed to pass any prescription drug pricing reform bills this session, but said he would continue his work in the next two sessions.

“We ran out of time,” Nosse said. “This issue is not going away.”

Nosse said he is likely to introduce a transparency bill in 2018 to force pharmaceutical companies to provide state officials with information into the high cost of prescription drugs. He said he would probably wait for the 2019 long session to try again at the heavier lift of price controls for medications, which routinely cost several times more in the United States than they do in Europe or Canada because of a lack of regulation.

Unsurprisingly, Rep. Cedric Hayden, R-Cottage Grove, did not agree with much of the Democratic Legislature’s agenda, and said he felt many of his policy bills were spiked out of spite, even when they had bipartisan support.

The Lane County dentist said oral health bills for veterans went nowhere, even as he was given a verbal promise that they would get funded. He was also disappointed at the failure of HB 2979, requiring the Oregon Health Authority to immediately put lapsed members back into CCOs. He said requirements in the OHA budget will allow the state agency to perform poorly.

He did support passage of a bill that gives dental care organizations a permanent seat on the 16 CCO boards, which passed despite some late-inning shenanigans from the CCOs to kill the legislation in the Senate.

Hayden shed insight on the stiff opposition that HB 2822 faced from CCOs -- the law ensures that dental care groups will continue, even as some CCOs may want to cut them out of the game. A law that protected DCOs is expiring as the Medicaid plans strike new contracts with the dental providers.

Hayden continues to back West Linn Republican Rep. Julie Parrish’s crusade to repeal the provider tax, arguing that there’s no guarantee that the state will get the federal waivers approved and the Oregon Health Plan has enough of a reserve to get into 2018 without all of the new taxes.

Republicans support a 4 percent assessment on rural hospitals and part of the assessment on larger hospitals. They also back using the $50 million left in the old high-risk Oregon Medical Insurance Pool to draw down $150 million in federal matching dollars for the program, which would close a third of the funding shortfall.

Greenlick said he anticipated that hospitals and insurers will help fund the opposition campaign if the tax repeal makes the ballot, since they benefit from a better-funded Medicaid system, and most of them supported the tax package. “If we don’t have a provider tax, they will be hurting. … This isn’t really a tax. Every dollar they put in, they get $2.50 back.”

Insurance Commissioner Laura Cali-Robison recently reduced individual health insurance market rates 6 percent because insurers will have access to a reinsurance program -- which they would lose if Parrish is successful.

“Both the hospital assessment and the premium tax is absolutely critical to funding those services and programs and the economy of the state,” said House Speaker Tina Kotek, D-Portland. “I’m frustrated that members of our body are cavalierly referring a ballot measure.”

House Minority Leader Mike McLane, R-Prineville, told reporters that he is not actively supporting Parrish’s petition drive even though he and most other Republicans opposed the provider tax.

McLane told The Lund Report that he actually supported an assessment tax on health insurance premiums to buffer the market with a reinsurance program, he just felt that 1.5 percent was too high -- and the state could have salvaged the individual insurance market with just a 0.25 percent tax. Reinsurance allows insurers to be reimbursed for high-cost members that they must cover.

“The reinsurance is very small compared to what the tax is,” said Hayden, explaining his objection.

McLane said he would have supported a smaller tax that was geared entirely toward stabilizing the market and not redirected to Medicaid.