The group, which has been meeting since January, acknowledged that Oregon is not likely to adopt universal care anytime soon but it pointed towards that goal by offering initial steps.
By:
Christian Wihtol 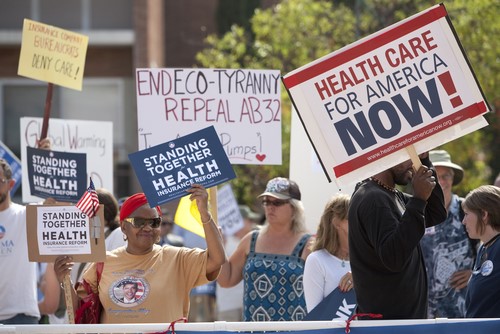 Creating a “universal” state-run health care insurance system in Oregon is a monumental task and it’s unclear whether a majority of Oregonians even favor such a radical change, but a legislative work group this week offered some baby steps for the 2019 Legislature to consider.

Since January, the Universal Access to Health Care Work Group has mulled ways to improve Oregon’s current health-care offerings and move toward a single-payer system that would be under state oversight.

The group suggested a number of interim steps.

The state could create a new health insurance plan for Oregonians modeled after the state’s Medicaid program, the Oregon Health Plan, which serves low-income people. The new plan, called “Medicaid buy-in,” would be available to low-income people who currently lack a health insurance plan, most notably some 130,000 unauthorized immigrants in Oregon, as well as to higher-income individuals or families who are not eligible for the Oregon Health Plan or for federal tax credit assistance to buy private health insurance.

For Oregonians who already buy commercial health insurance, the new plan would be an alternative. The new plan might have a premium of about $6,000 per person per year, compared to $7,000 or more for similar commercial insurance, according to tentative state estimates.

The state could require Oregonians to have health insurance or face a financial penalty. Under the federal Affordable Care Act, residents nationwide are required to have health insurance or pay a penalty. However, Congress and President Trump erased that provision, effective next year. Oregon should consider setting that mandate on a state level, the Universal Access to Health Care Work Group said. The more people who pay into health care systems by having insurance, the more financially viable the systems are.

Expanding a program, now in place in the Portland area, that helps low-income people sign up for and stay on government-funded health insurance, especially the Oregon Health Plan.

But aside from these fixes, moving the state toward a universal health care system, in which state government oversees all health care insurance, is a colossal task, the work group said.

Currently, about half of Oregon’s population of 4.1 million has insurance paid for by the government: Medicaid (Oregon Health Plan) and Medicare (for the elderly). The great majority of the money for Medicaid and Medicare comes from the federal government.

The other half of the population – the commercial market – consists of people who have health insurance through work or buy plans for themselves and their family through the state health insurance exchange or buy directly from a particular insurer.

To create a universal single-payer health care system in the state, the state would need more control over the spending of federal Medicaid and Medicare money that currently flows into the state, the report said.

Also, a single-payer system would require “redirecting funding currently provided through employer-based health insurance,” the report said. In essence, the money that individuals and employers currently spend buying health insurance in the commercial marketplace would have to flow instead to the state, and those individuals would then become covered by a universal system created by the state.

“The work group recognizes Oregon’s current health-care system is not compatible with a state-based universal health care system without significant and unprecedented changes at the federal level, including congressional action,” the report said. Getting a “waiver” from the federal government on the handling of Medicaid and Medicare dollars in Oregon “is unlikely under our current (federal) administration,” the report said. “But this does not mean we cannot make progress toward that goal.”

“An important next step in Oregon is meaningful consumer engagement around issues including provider choice, benefit coverage, eligibility and financing required to fund a universal health care system,” the report said.

I attended most of the Work Group meetings and was very impressed with the members of the committee and the quality of their discussions. But the committee took several unproductive off-ramps.

Here is my testimony:

A Medicaid buy-in may look like a stepping stone to universal health care but is more like a lily pad.

If a Medicaid buy-in program is available or appealing to only the 280,000 Oregonians (8% of Oregon’s non-elderly population) who now have non-group health insurance, its impact on the overall health care costs for the state would be modest.  Premiums and out-of-pocket expenses for those eligible (incomes at 138% - 400% federal poverty level) may remain unaffordable, as they have under the ACA for many Americans.

A Medicaid buy-in would not solve the issues faced by Oregonians with insurance: narrow networks of doctors and hospitals, unaffordable drug prices, paltry access to dental and long-term care, and rising out-of-pocket costs (e.g., copayments and deductibles) that are squeezing household finances and are part of an epidemic of "underinsurance" in America. Finally, it would not create the greater administrative efficiencies of a single-payer system that were described in the 2017 Oregon RAND report.*

A single risk-pool unified-payer plan similar to the one studied in the Oregon RAND report is a necessary component ofaffordable health coverage for all Oregon residents, one which would promote choice of providers, transparency and accountability, and would improve the health of our population at no greater cost than it currently faces in its public and private health care plans.Tax bases for such a system are being studied in Corvallis that will be politically and fiscally acceptable.

The political window of opportunity can open unexpectedly. We can and must be ready with a publicly-funded single risk-pool unified-payer plan. It is an essential element in our ability to achieve the universal health care system that the Oregon Legislature has worked so hard to achieve over the past 30 years.

Please don’t let the public be bought out by a public option buy-in scheme.  Premium support plans are equally flawed and simply add to the insurance industry's habit of  stealing public funds.

*To facilitate states adopting their own single payer systems, H.R. 6097, introduced in Congress by Representative Jayapal of Washington, would allow waivers to Medicare and ERISA rules that currently hinder the formation of state-based single risk-pool, unified-payer systems. H.R. 6097 would remove the major obstacles (listed by the RAND report) to universal health care in Oregon. Representatives Blumenauer, DeFazio, and Bonamici have signed on to H.R. 6097.