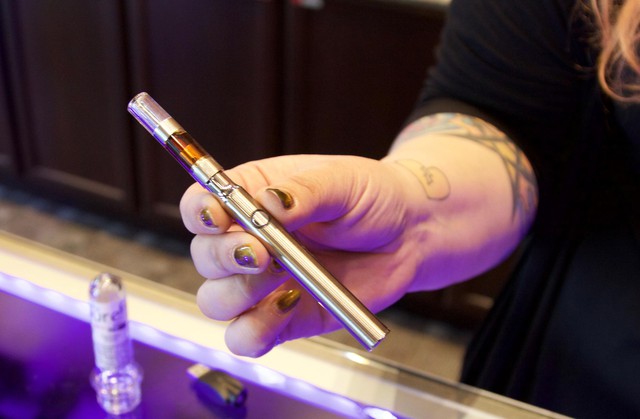 The CDC is warning people not to vape while an investigation figures out why six people have died and 450 sickened after vaping./Kristian Foden-Vencil/OPB

Oregon and Washington lawmakers are calling out federal health agencies for inaction on vaping health problems.

This comes as more details emerge about the Oregonian who died after vaping, and health officials announce that a second Oregon resident has received treatment for severe lung disease.

Northwest Senators Jeff Merkley, Ron Wyden and Patty Murray joined 20 other senators in a letter to the U.S. Food and Drug Administration and the Centers For Disease Control And Prevention, saying the agencies have failed to act swiftly to address lung problems in youth who vape.

So far six people have died and more than 450 across the country have suffered illnesses linked to vaping. Their average age is 19.

The politicians want to know all the products being analyzed, the timeline for the investigation, and whether any products will be pulled from the market.

“For years, we have written to you and your predecessors about the dangers of youth use of e-cigarettes, but public health agencies—particularly the Food and Drug Administration (FDA)—have failed to act swiftly and comprehensively to address the epidemic of youth use of addictive e-cigarette products,” the senators wrote.

“This action should include the following: a strong, clear message to the public about what is currently known about the dangers of e-cigarette use; immediate removal from the market of e-cigarette products that have been linked or could be linked to the pulmonary illnesses and deaths; and FDA’s immediate enforcement of the required public health review of e-cigarette products with the authority granted to FDA under the Tobacco Control Act. FDA should also immediately take action to remove flavored products from the market, until or unless they have undergone FDA review that shows they are of benefit to the public health,” the senators wrote.

Meanwhile, doctors who treated a middle-aged Oregonian who died said the patient struggled to survive for five weeks.

Speaking to The Oregonian, the doctors said the patient seemed to get better after a machine drew their blood, saturated it with oxygen, then pumped it back.

They say recovery seemed possible until the very end.

The doctors don’t know what specifically caused the illness but hope an autopsy will provide more information.

The Oregon Health Authority also said this week that a second Oregon resident has received treatment for severe lung disease.

The American Vaping Association is questioning the CDC’s warning against vaping. The association said it thinks the problems are a result of vape pens that have had THC added for sale on the black market.

“It’s been clear for years that an epidemic of youth e-cigarette addiction was building; that companies were surgically targeting teens in their product and marketing strategies; and that the long-term health impacts of e-cigarette use were unknown and potentially dire,” Merkley said.

“It should never have taken multiple deaths and hundreds of cases of teenagers with lung disease for the FDA to conclude that e-cigarette flavors like ‘gummy bear,’ ‘Scooby snacks,’ and ‘strawberries and cream’ are insidious and have no place on the market,” he said. “I can only hope that today’s action is made permanent soon, and that it will come in time to save the thousands of lives that may still be at risk.”