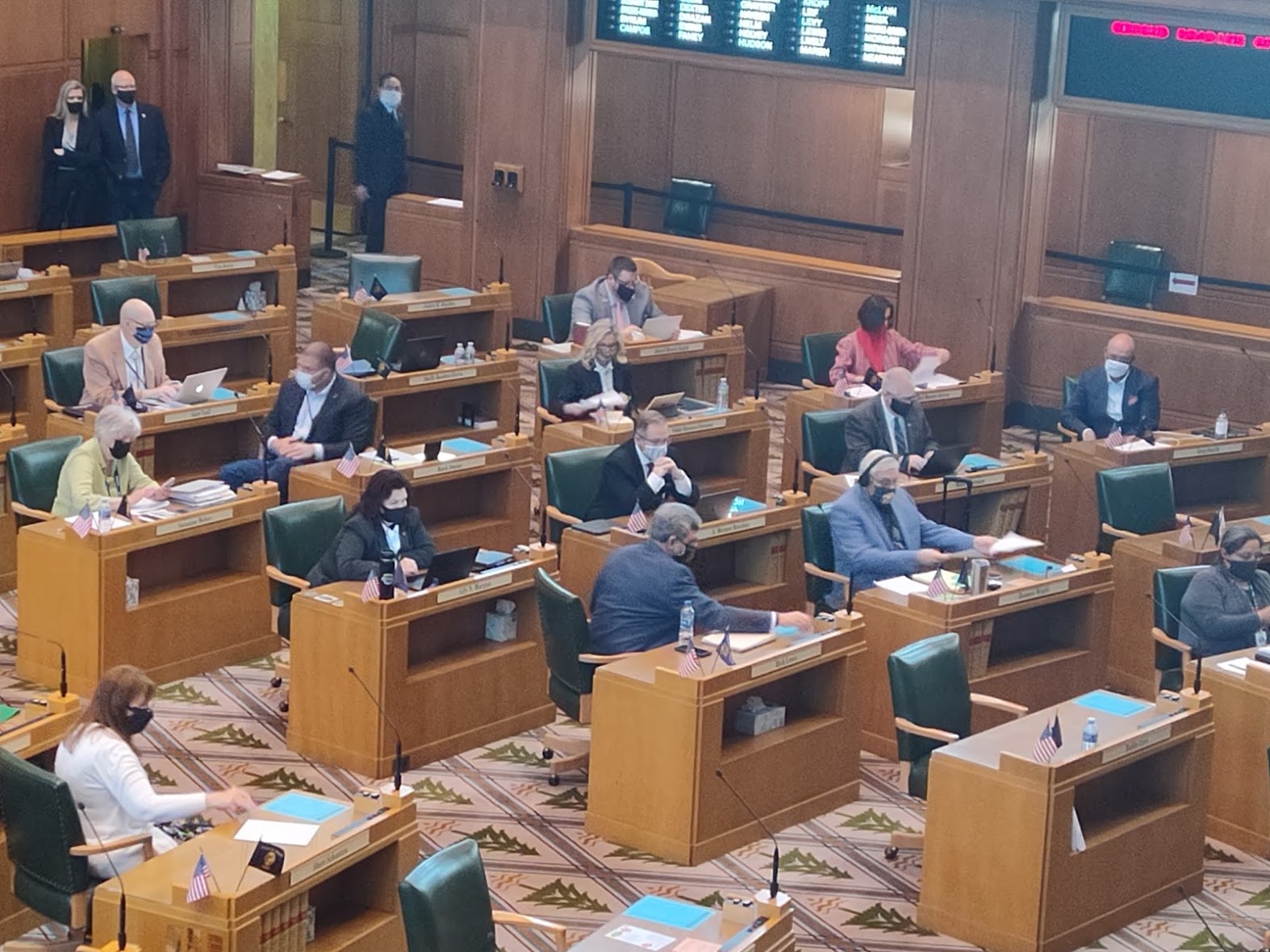 Oregon House lawmakers want to expand Medicaid so it  covers Oregonians who would otherwise be ineligible because they are not legal immigrants.

The House late Thursday passed House Bill 3352, also called Cover All People, to bring Medicaid coverage to Oregonians who would be eligible for the safety-net health coverage but for their immigration status. The bill passed 37-21 along party lines and now goes to the Senate.

The Pew Research Center estimates Oregon’s unauthorized immigrant population is 110,000. The program, to start, would cost the state $100 million in the next biennium. House Republican Leader Christine Drazan opposed the bill, voting against it on the floor and in the Joint Ways and Means Committee. In committee, Drazan said she was opposed to the bill because of questions about its long-term financial sustainability.

The bill allows the Oregon Health Authority and a work group to limit who qualifies for the program if necessary to stay within the $100 million cost. But the price could easily grow beyond that.

While the federal government pays the lion’s share of the cost of Medicaid, it will not pay for coverage for unauthorized immigrants, so the cost of the expanded coverage would likely fall to the state. Typically, Medicaid costs taxpayers about $6,000 per covered person per year. So, covering 50,000 would cost about $300 million a year.

For lawmakers, the bill’s passage represents the session’s emphasis on racial and health equity for all Oregonians. The pandemic has highlighted disparities among minorities and people of color, who were hardest hit by COVID-19. Latinos make up 13% of the population, but shouldered 18% of COVID-19 cases.

"Too many people in our state are at risk because they can't afford to go to the doctor. We must and we can do better," said co-chief sponsor, Rep. Wlnsvey Campos, D-Aloha, who introduced the bill. "HB 3352 will improve lives and reduce suffering for our undocumented neighbors living and working in our state and also shows that in Oregon, we reject the anti-immigrant policies, actions and words that we saw coming out of the federal government over the past four years that terrorized communities."

Cover All People represents a new chapter in the state’s work to expand health coverage that began well before COVID-19. It builds on the Cover All Kids Medicaid program, which covers undocumented children under 19. That expansion started in 2018 after lawmakers passed Senate Bill 557 in 2017. Since then, the program has enrolled nearly 6,000 children, according to a 2020 state report.

The HB 3352 program would have the same income limits that other Medicaid recipients face, which means they could not earn more than 138% percent of the federal poverty level. A single adult could earn up to nearly $1,400 a month and a family of four could have a monthly household income of $2,887. There would be higher income limits to cover pregnant women.

The bill directs the Oregon Health Authority and Oregon Department of Consumer and Business Services to seek federal approval of the program. States are required to seek federal approvals -- technically known as waivers -- for changes they want to make to Medicaid, even if the federal government won’t pay the cost of a particular expansion.

Oregon is in the midst of working on its five-year waiver renewal, which will be submitted before its current waiver expires on June 30, 2022.

It’s unknown how many of Oregon’s undocumented people are uninsured.

Some experts suggest that most are uninsured because buying commercial health insurance is so expensive. Many undocumented residents work in temporary farm jobs or other manual work that don’t provide health insurance.

'Very Personal To Me'

“This is very personal to me,” Alonso Leon said in a statement. “Before I became a legislator, I worked in the fields with my parents, who would often sacrifice visiting a doctor when they got sick to save money for food. It’s a choice Oregonians still have to make. That is an injustice; it’s a human rights violation.”

The bill has wide support from groups that represent farm workers and immigrants. PCUN, a labor union representing more than 6,000 Oregon farm workers, said the bill would provide much-needed health care coverage for its people.

“Farmworkers are particularly vulnerable to many of the most serious health consequences because of the work they perform,” the group said in testimony to lawmakers. “They are exposed to wildfire smoke, do heavy, physically exerting work in hot temperatures, with high levels of physical and mental stress, and with pesticide exposure. These conditions are linked to many serious health impacts on farmworkers, ranging from heat exhaustion to kidney disease. However, there are some farm workers that are not eligible for healthcare due to their immigration status.”

Lawmakers who work in the medical field welcome the legislation.

“As a pediatrician, I know that care starts with the parent. Cover All People will help us ensure children are covered because parents with coverage are more likely to enroll their children,” said co-chief sponsor Rep. Lisa Reynolds, D-Portland. “This is about creating a healthier and happier state.”

The bill also would prevent costly trips to the emergency room. Primary care can prevent minor issues from worsening. For undocumented people without insurance, sometimes the only option is a trip to the emergency room, where patients cannot be turned away for lack of insurance or ability to pay.

“From an economic standpoint this is just common sense policy,” said co-chief sponsor of the bill and physician, Rep. Maxine Dexter, D-Portland. “Right now people who can’t afford basic preventative care are relying on emergency services, the riskiest and most expensive care that under federal law, Oregonians are paying for already. With Cover All People we’re containing costs and keeping people healthy.”

Jun 25 2021
News source:
The Lund Report
Keywords:
undocumented immigrants, oregon house, lisa reynolds, maxine dexter, winsvey campos, cover all people, christine drazan
×
This article is for premium subscribers. If you are one, please sign in below.
You can see two more premium stories for free. To subscribe, click here. We depend on premium subscriptions to survive, and they are tax deductible.
Sign InGo Premium Not now